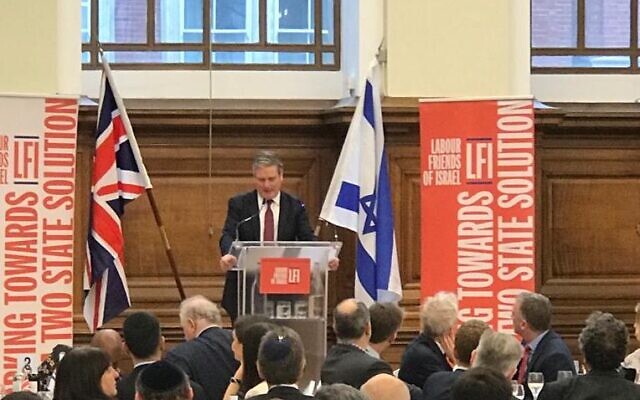 Sir Keir Starmer has used a keynote speech at the annual Labour Friends of Israel lunch to launch an outspoken attack on “anti-Zionist antisemitism.”

In a speech that went further than ever before in explaining his decision to confront anti-Jewish racism he said: “The changes we have made to our procedures allow us to confront the symptoms … but to really identify, confront and root out anti – Zionist antisemitism we should look to the words of the late David Cesarani .”

He then continued: “Anti-Zionist antisemitism is the antithesis of the Labour tradition: It denies the Jewish people alone a right to self-determination; It equates Zionism with racism, focuses obsessively on the world’s sole Jewish state, and holds it to standards to which no other country is subjected; And it seeks to paint the actions of Israel as akin to the crimes of those who sought to annihilate European Jewry in the Shoah.

“Anyone who has visited a Holocaust memorial , a concentration camp or spoken with a Holocaust survivor will be struck by the cruelty of that charge, will have grasped the resolve of Israel’s founding fathers to make a reality of the words “Never Again” and will understand why – for so many Jews – Israel will always stand as the ultimate guarantor of their safety.”

“And let me be clear, too, the Labour party does not and will not support BDS,” he said.

” We believe that international law should be adhered to – but a policy of BDS would be counterproductive.”

Starmer also revealed his resolve to tackle his party’s Jewish issues “was hardened when David Baddiel gave me a copy of his brilliant book  ‘Jews Don’t Count’, which demonstrates  so clearly  how racism against Jews is held to a different standard from other kinds of racism.”

He also referred to the on-going scandal around the naming of a Jewish character in a new West End play saying: “Just last week saw the Royal Court theatre forced to change the name of a character that was blatantly racist stereotyping.

“They called it ‘unconscious bias’ which just isn’t good enough.”

Starmer paid tribute to his wife Victoria’s Jewish family as he admitted his work on tackling antisemitism was not complete.

He said: “Our work is by no means yet complete, but I give this pledge to you today: “We will not give up this fight against this kind of racism, bigotry, and hatred….until it is finally won! “

LFI chair Steve McCabe delivered a passionate speech in support of Israel and also stressed the need for Labour to continue to be vocal on the need for a two-state solution with the Palestinians.

In her speech Israeli ambassador Tzipi Hotovely praises the Labour leader and shadow foreign secretary Lisa Nandy over their show of solidarity with her after last week’s intimidatory scenes outside the London School of Economics.

She praised LFI and said she accepted their had been difficult years under Jeremy Corbyn. Hotovely said she felt as though she was amongst “friends” at the lunch.

She also delivered a harsh attack on Iran.

Dame Louise Ellman, who recently rejoined the Labour Party, and who has a long association with LFI made the appeal speech.

With over 300 attendees the event was a triumph for LFI chair Michael Rubin, who has enjoyed excellent relations with the current Labour leadership – in stark contrast to relations under the previous leader Jeremy Corbyn.

Adrian Cohen, LFI’s lay chair also delivered a poignant message of thanks to those who were at the lunch.