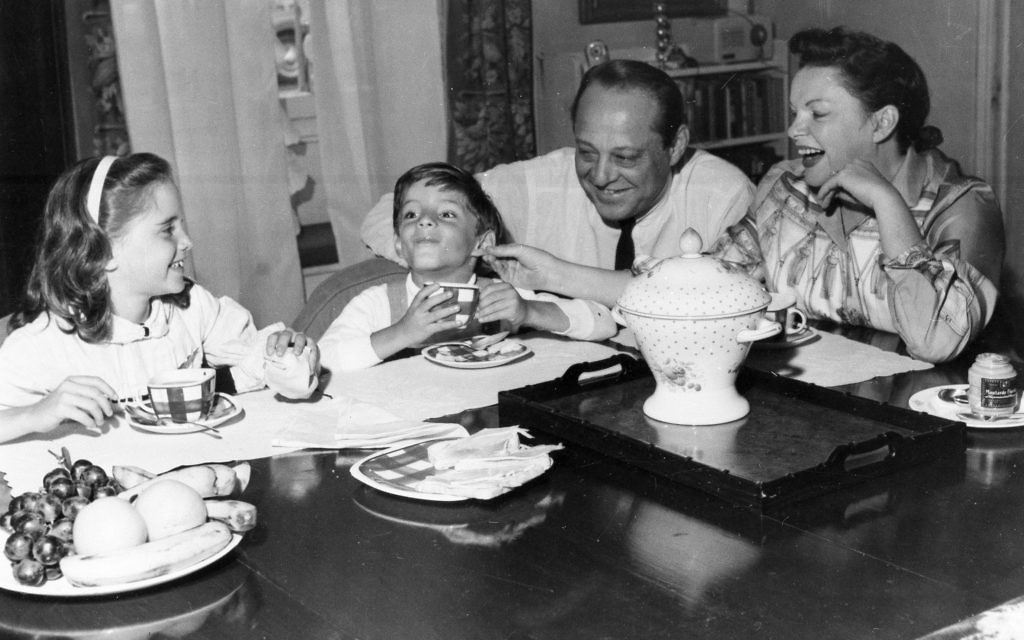 Growing up as the daughter of Judy Garland meant Lorna Luft was never out of the spotlight. As she arrives in London to star in her solo cabaret show next week, she tells Suzanne Baum all about her fame, family and recent health scare.

Welcome to showbiz: Lorna on stage with her mum, Judy Garland

As the daughter of Judy Garland and Jewish film producer Sidney Luft, American actress Lorna Luft has had a very colourful life. Following her mother into show-business from an early age, the 62 year – old is yet to hang up her performing shoes despite battling breast cancer.

“There’s still life in me yet,” jokes Lorna, who is about to star in a cabaret show at the West End Crazy Coqs jazz venue -a place she feels very at home at.

“I feel so comfortable performing there, it is like my living room,” she says. “The people who run the venue are like my family and as I know what I’m doing, I never suffer with stage-fright.”

For someone who literally spent their childhood on the stage this comes as no surprise. As well as appearing on her mother’s short-lived television program, The Judy Garland Show, when she was barely in her teens, Luft also appeared in Garland’s Broadway show, At Home at the Palace. The two sang duets together in the show but did not get the chance to work together again as Garland – who had been struggling with a drug problem and depression for years – died of an accidental overdose in 1969.

“My mother taught me so much but the one thing she most wanted for me was not to feel different,” recalls Luft. “She was aware that in her show business world people were not the norm and growing up on a movie set she always felt different. It was important for her to make us realise that we must never allow anyone to feel awkward.”

Luft and her siblings-Joseph and half-sister Liza Minnelli –were encouraged to take people at face value and in particular not to judge anyone on their religion.

“My father was not very religious and both he and my mother encouraged us to embrace everything about both their religions so I enjoyed celebrating both Christmas and Chanukah,” said Luft.

Fun at home with mum, dad and her brother Joseph

Although she was close to her parents, it was her grandmother Leonora who had a huge influence over Luft when it came to Judaism, teaching her the rituals, customs and culture.

“My grandmother came from Russia to America and taught me about Judaism, in particular the food. She would cook all day long; stuffed cabbage, latkes and chicken soup, all the recipes she passed down to me.

“In fact if anyone is ever sick I bring out the chicken soup, Jewish penicillin at its best.”

As well as pointing out that all her best friends are Jewish, she explains her children (Jesse and Vanessa from her first marriage to Israeli-born rock musician Jake Hooker) also have a huge social circle of Jewish friends.

“We just seem to be drawn into the religion; I always encouraged the kids to go to all their friends’ barmitzvahs and they had so much fun. I love the Jewish culture and have been to Israel several times.”

Now a grandmother herself-her son Jesse had a baby three months ago-Luft says he is having “so much fun.

“Seeing this new generation in front of me is amazing. I get to see my granddaughter often and when I am performing or travelling abroad I FaceTime my son at least twice a day to see the baby’s face.”

It is social media, as well as TV, that Luft believes is the reason why cabaret-which she is so passionate about-is a dying art-form.

“At the start of my career there were so many cabaret venues throughout America but nowadays they no longer exist as technology has moved on so much, people look elsewhere for entertainment.

“This is why I love coming to perform at the Crazy Coqs as it is one of the few original cabaret venues still around.”

In her solo show- Accentuate the Positive– Luft sings many beloved standards, such as Any Place I Hang My Hat is Home, Come Rain Or Come Shine, and Jamboree Jones, and in a special section, Lorna will pay tribute to Johnny Mercer, (dubbed “America’s poet”), a close family friend. Mercer, who won four Academy Awards, also wrote the lyrics to Judy Garland’s television theme song, which she sang regularly to Luft when she was growing up.

“A lot of my show tells a personal story, I always have to relate to a subject to perform it,” points out Luft. “My family and Johnny Mercer’s were very close so singing from the heart makes my performance so meaningful.”

It has been nearly two years since Luft was diagnosed with cancer and despite undergoing gruelling treatment including chemotherapy which has resulted in hair loss, Luft remains as upbeat as ever.

“As they say in the business the show must go on and I am honoured to wear my pink ribbon with pride.”