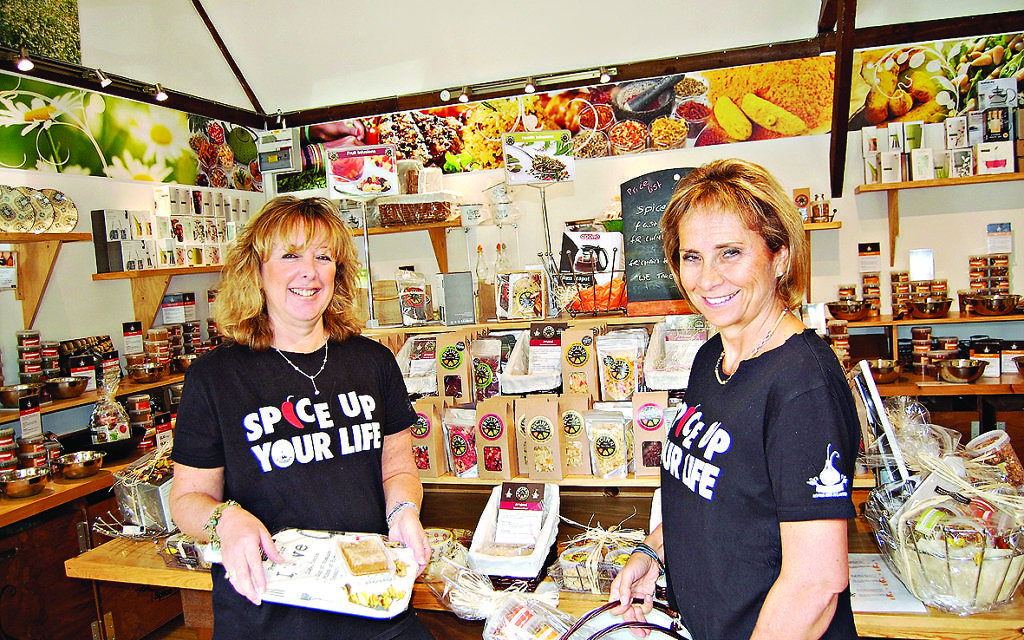 It’s not every day you meet someone, or in this case two people, offering to spice up your life – but that’s what happens when you run into Karen Pomerance and Louise Caplin in their shop at Battlers Green Farm in Radlett.

To a growing army of fans, the spice girls are not a former pop group but the dynamic duo running Spice Way, a company that has tapped into the trend for making food more interesting, or tastier, or simply better for you, by adding ingredients once thought exotic and unattainable, but now increasingly coming to market.

It all began six years ago when Pomerance and Caplin were on a girlie holiday in Israel and wandered into a shop called Spicy Way, run by businessman Avi Zitterspieler.

“We became enthralled with the sights and smells of the spices on display,” Pomerance recalls. “There were also fruit teas, something completely different that we had never experienced before, because when you’ve finished the tea, you can eat the fruit.”

The pair made contact with Zitterspieler and flew to meet him in Cologne at a large trade show.

One of Spice Way’s aromatic blends

Taking up the story, Caplin says: “We discussed starting the business in the UK and negotiated a contract that gives us sole distribution rights here and in Ireland and the Channel Islands. We developed our own packaging and began marketing the products by travelling up and down the country selling to delis, farm shops and hotels.”

Building on their enthusiasm for the teas, Pomerance and Caplin also developed Fr’cinni, their own trademarked name for their fruit infusions. An early breakthrough came when The Caramel Room at London’s Berkeley Hotel became a prestigious customer.

“The manager became so excited when he first saw the teas that within two weeks he got them on to the menu, where they still add that certain difference to the Fashionista Tea,” Pomerance notes.

Since their launch, the dynamic duo, both 53 and with three children each, have been busy taking part in a succession of trade events and county shows. They have spiced up the Taste of London and BBC Good Food Show culinary festivals, the Taste of Christmas gift fair, and many more. They have also appeared on QVC – “that really raised our profile and that of our website too and gave us a taste for appearing on TV,” Caplin says.

And the build-up goes on – Spice Way was then approached by Amazon to be included in the online giant’s fine food pages, which the partners say is doing really well for them, and most recently has managed to get into Selfridges – “which is obviously very prestigious and great for our profile,” adds Pomerance.

Also prestigious are the seven awards the company has amassed to date in the national Great Taste competition, including in 2013 the highest three-star accolade for the Fr’cinni range’s Opulent Orange Chilli. Other award-winners have included the Posh Pomelo and Melon fruit infusion, Classic Chinese and Magic Majadra Indian from the Fast Gourmet range and the Heavenly Herbs spice blend.

The colourful Radlett shop opened in May last year as the “jewel in the crown” of the business and stocks more than 70 flavours across the Spice Way ranges, divided into Fr’cinni Fruit, Fr’cinni Health, Fast Gourmet, Spice Blends and Cook Clever categories. There are also gift items from £6 to £25, available in wicker baskets, metal trays and jute bags and which can also be custom-made. The shop offers workshops where the partners cook and teach customers how to use Spice Way products.

What next? Possibly more shops. Says Pomerance: “We are always looking for new sites that could offer us the opportunity of rolling out our concept or even franchising.”

In all the excitement – and hard work – of building Spice Way, the partners have not forgotten their roots. Pomerance, who belongs to Shenley United schul, grew up with the JNF, where her father, wedding ring manufacturer Eddie Brown, was president for more than 16 years.

Her daughter, Sasha, 28, lives in Israel, while son Joshua, 25, is head of Mizrachi UK. A second son, Nathan, 22, works for an accountancy firm.

Pomerance herself confesses to an abiding love for Israel – “it’s in my blood” – and she was chair of the Magic Moments UJIA committee for three years. “It is a project close to my heart,” she says, “and I know it makes a real difference to many lives here and in the north of Israel.”

Caplin, a member of Radlett United shul, is coping with the forthcoming marriage of daughter Simone, 27, and dealing with two sons living at home – Daniel, 25, who works in the City, and Gideon, 22, who is studying law.

She also shares her business partner’s enthusiasm for Israel. “We have a passion for the country, spending as much time there as possible,” she says. “My husband Adam and I have put down roots for our future in our own home – one day we will make our dream a reality.”