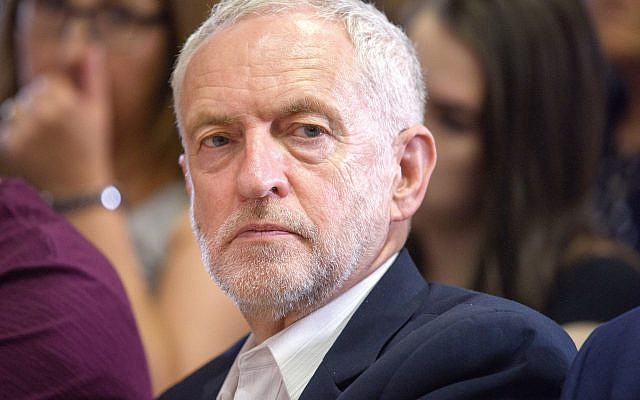 Anger over Jeremy Corbyn’s endorsement of a book containing overtly antisemitic tropes deepened yesterday as the Jewish Labour Movement said it was submitting a formal complaint about the episode.

J A Hobson, an economist, wrote Imperialism: A Study, in 1902, but a new edition was published in 2011. Four years before he became leader of the Labour Party, Corbyn wrote an extensive foreword to the re-published work.

Hobson argued in the book that global finance was controlled in Europe by “men of a single and peculiar race, who have behind them many centuries of financial experience”, who were “in a unique position to control the policy of nations”.

He added, in case anyone was unclear as to his meaning: “Does anyone seriously suppose that a great war could be undertaken by any European State, or a great State loan subscribed, if the house of Rothschild and its connections set their face against it?”

The revelation, uncovered by The Times’ Lord Finkelstein, provoked widespread fury. A strongly-worded statement from the Jewish Labour Movement said: “A fish rots from the head”, adding that any other Labour member would have been suspended and that Corbyn should “consider his position”. The affiliate will also ask the EHRC to include Corbyn’s endorsement of Hobson’s book in any investigation of the party for institutional antisemitism.

In his 2011 foreword, the Labour leader described Hobson’s book as “a great tome”, and praised the writer’s “brilliant, and very controversial at the time” analysis of the “pressures” behind western, and in particular British, imperialism at the turn of the 20th century. Some of the passages about the popular press, said Corbyn, were “correct and prescient” — arguments in which Hobson declared that “great financial houses” have “control which they exercise over the body of public opinion through the Press”.

A Labour spokesman admitted that Hobson’s work “contains outdated and offensive references and observations, and Jeremy completely rejects the antisemitic elements of his analysis”.

But critics of the Labour leader have been outspoken on social media, unable to understand how Corbyn could have written a foreword apparently endorsing Hobson, without referring to his antisemitism.

In a letter, the Board of Deputies president Marie van der Zyl, said that Hobson’s argument was “unequivocal racism and there can be no apology for it”.

She said that the British public were entitled to know how he could account for his actions. “We expect a full explanation”, she warned.

Margaret Hodge took to Twitter to say: “For Corbyn to have praised a book packed full of antisemitic conspiracies – the very same conspiracies directed at me – is disgusting.” Wes Streeting said: “My advice to any Labour MP : refuse to defend Jeremy Corbyn lauding a book containing classic antisemitic tropes. If he wants to defend the indefensible he should go on the airwaves and defend himself. He has a responsibility to explain himself.”

Abigail Morris, chief executive  of the Jewish Museum London said: “Our exhibition ‘Jews, Money, Myth’ explores the role of money in Jewish life over 2,000 years and the association linking Jews to money. We haven’t invited any leaders of the major political parties to see this exhibition, but if any decision-makers would like to visit the museum in order to learn about the development and realities behind some of the most deeply rooted antisemitic stereotypes they are very welcome to do so.”