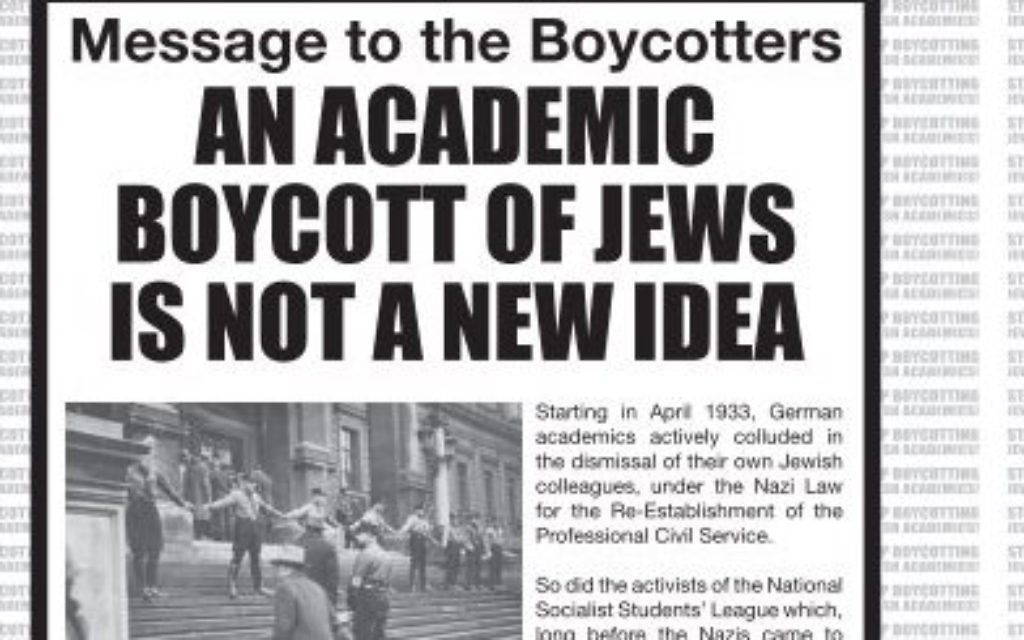 Jewish Human Rights Watch has published an advert in the Guardian urging an end to boycotts of ‘Jewish academics’, following 343 scholars printing a commitment to boycott Israeli universities in the publication last week.

Published on Friday, it draws parallels between the anti-Israel Boycotts, Divestment and Sanctions movement (BDS) and the policy of boycotting Jewish businesses during Nazi Germany.

It includes an image of Nazi guards blocking Jews from entering a university in Vienna in 1938, adding: “Message to the Boycotters. An academic boycott of Jews is not a new idea.”

On JHRW’s website, a spokesperson said: “We call upon the named universities involved in this hoodwinked attempt at anti-Semitism, to dissociate themselves from these so-called academics.  We urge the universities to see the truth.

The UK does not and will not allow the BDS movement to lead this unprecedented rise in anti-Semitism. Its tirade of anti-Semitism has gone unchallenged for too long.”

They told Jewish News, “we were able to fund the advert through asking our supporters to help make a difference in our battle.”

“Starting in April 1933, German academics actively colluded in the dismissal of their own Jewish colleagues, under the Nazi Law for the Re-Establishment of the Professional Civil Service.

So did the activists of the National Socialist Students’ League which, long before the Nazis came to power, organised boycotts of, and disturbances in, lectures given by Jewish academics.

“In many universities, up to one third of the faculty were purged in this way.

Those responsible included philosophers of worldwide renown such as Martin Heidegger at Heidelberg University, and also many junior scholars who spotted opportunities to advance their own careers.

In light of this background, it is disturbing that 350 British academics would support attempts to boycott all academic institutions in the Jewish state.

Therefore we call upon British universities to show responsibility and immediately disassociate themselves from this deplorable gesture, which damages their institutions and goes against the fundamental idea that universities should be promoting: Learning – free from antisemitic boycotts.”