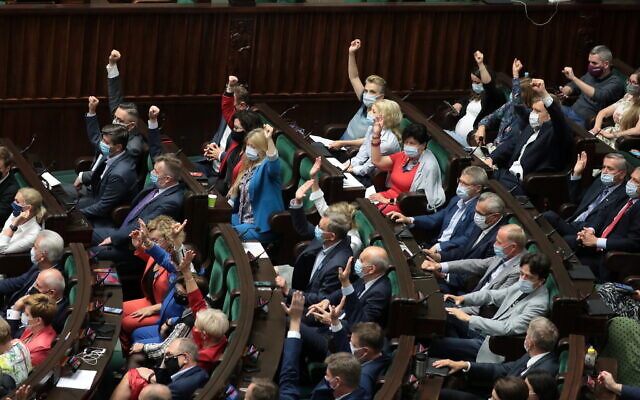 Israel, Jewish groups and the United States have condemned Poland’s parliament after MPs approved a bill that would prevent Jewish claims for compensation or for property seized during the Holocaust.

Yair Lapid, Israel’s foreign minister, said the new measures damaged “both the memory of the Holocaust and the rights of its victims.”

The new legislation would place a time limit on the period during which flawed administrative decisions, including on property ownership, can be challenged.

Jewish campaigners say families wiped out by the Holocaust will be affected because the new law prevents claims against any property that was later seized by Poland’s communist government.

Poland’s communist era ended in 1989 but subsequent governments have never passed a law that would regulate compensation or the return of seized property, unlike other European countries.

Wednesday’s vote means the bill, which introduces a 30-year time limit on property claims, will become law if it is not vetoed by President Andrzej Duda.

US Secretary of State Anthony Blinken said he was “troubled by legislation passed in Poland severely restricting restitution for Holocaust survivors and owners of property confiscated during the Communist era”.

We are troubled by legislation passed in Poland severely restricting restitution for Holocaust survivors and owners of property confiscated during the Communist era, and draft legislation that would gravely weaken media freedom. Our shared values are our mutual security.

The Board of Deputies in the UK said the vote was “awful, but regrettably unsurprising.”

Vice President David Mendoza-Wolfson called on the Polish president to veto the bill: “The Bill is unjust to both Jews and non-Jews who are simply wishing to be treated with the morality and decency they deserve and to receive adequate compensation for what is rightfully theirs.

“On behalf of the UK Jewish community, I implore President Duda to veto this legislation, as is within his power, in order to honour the memory of the Holocaust and the rights of its victims.”