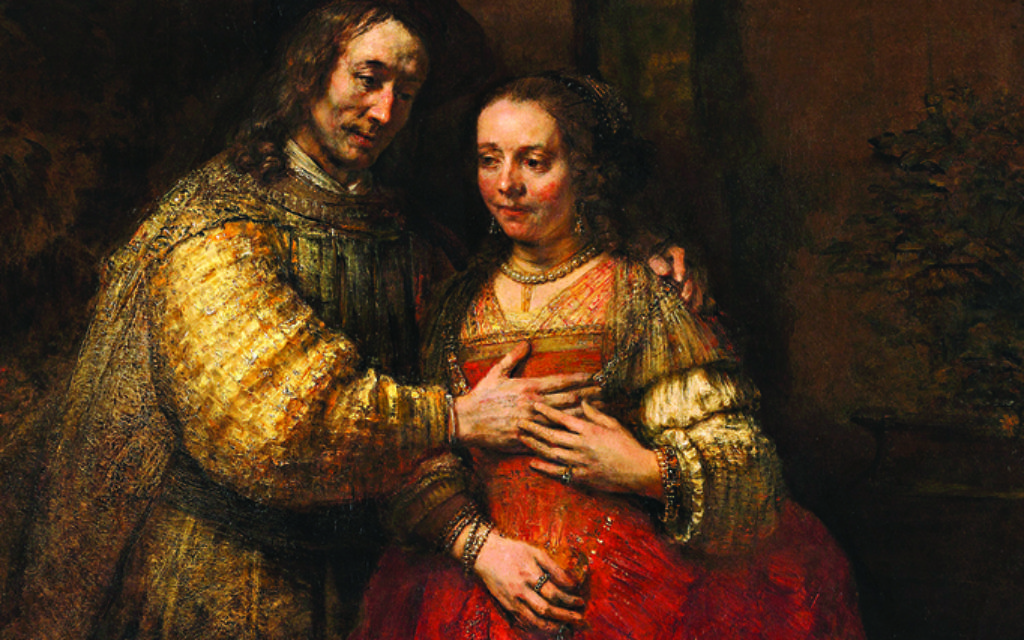 Visitors to the National Gallery’s Rembrandt exhibition have been wondering who the Jewish Bride is in the celebrated artist’s painting. Rebecca Wallersteiner offers an explanation..

More than 350 years after it was painted, Rembrandt’s Jewish Bride remains an enigma.

The portrait of a young couple as Isaac and Rebecca, better known as ‘The Jewish Bride’ 1665 depicts the couple’s tender affection for each other in a sympathetic depiction of this Old Testament pair. It is currently being shown at the National Gallery until January 18th, as part of the ‘Rembrandt: The Late Works’ exhibition and lent by the Rijksmuseum, Amsterdam.

For centuries people speculated who the Jewish couple in this iconic picture might be. The painting gained its name in the early 19th century when an Amsterdam art collector identified the subject as that of a Jewish father bestowing a necklace upon his daughter on her wedding day.

This explanation is no longer accepted. Other art historians have suggested that the couple might be Abraham and Sarah, or Boaz and Ruth. Their most likely identity is as a biblical allegory of Old Testament pair; Isaac and Rebecca. (Genesis 26:8).

This is supported by a drawing by Rembrandt on the same theme. Like many 17th century artists Rembrandt was fond of using biblical allegories in his work. Wealthy Dutch merchants were partial to being portrayed as historical characters to add gravitas to their new money. This is a brilliant portrayal of a couple’s early love, she shy, him protective.

The man places a tender arm over his bride’s heart, an ageless gesture of devotion. He stands over her attentively. She, in turn, lightly touches his hand with humility and kindness. According to Rembrandt biographer Christopher White the ‘Jewish Bride’ is “one of the greatest expressions of the tender fusions of spiritual and physical love in the history of painting.”

It is likely that this exquisite painting has hidden layers of meaning. Rembrandt was friends with Rabbi Manasseh Ben Israel, the founder of the Modern Jewish community in England, and it’s been suggested that he dreamt of reconciliation between the two religions. This picture may secretly represent this desire.

Upon viewing the painting for the first time in 1885, Vincent Van Gogh confessed to a friend that he would gladly give up ten years of his life to be able to sit in front of the painting for a fortnight with only a crust of bread to eat. He exclaimed in a letter to his brother Theo: ‘What an intimate, what an infinitely sympathetic painting.’

The couple’s identity remains a mystery: Their names may be lost – but their love survives.

For more details about the exhibition see www.nationalgallery.org.uk