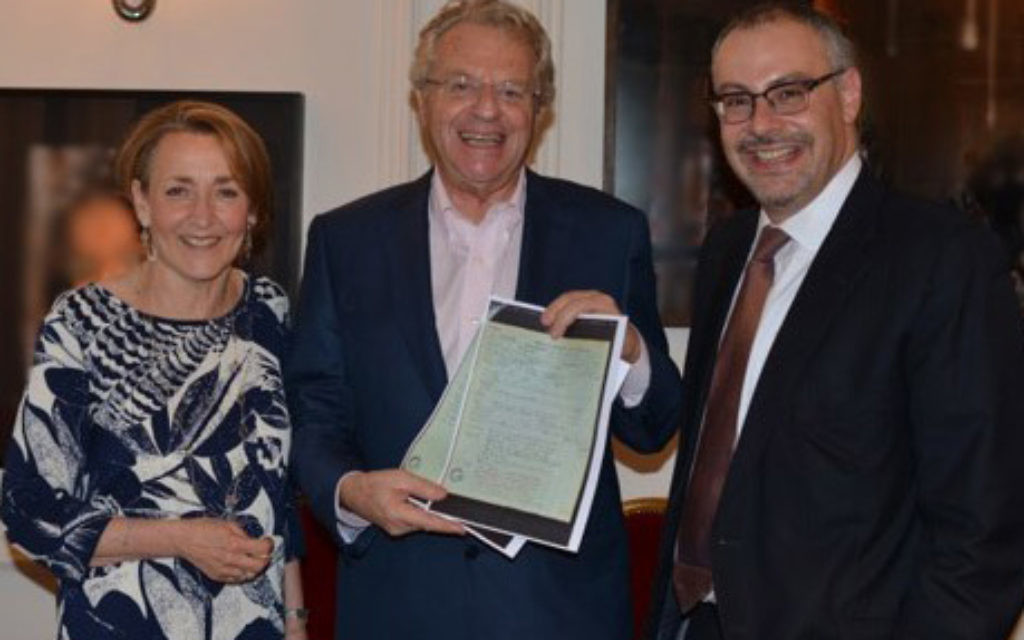 TV personality Jerry Springer has helped launch a World Jewish Relief archiving initiative after being presented with documents detailing his own parents’ arrival into Britain on the Kindertransport.

Springer, best known for hosting a daytime TV programme in the United States, was actually born in Highgate Tub Station in 1944, as his Jewish refugee family took cover during a German bombing raid.

The talk-show host spoke openly about his family’s roots and the effect of the Holocaust, revealing that 27 members of his family were murdered by the Nazis.

Earlier, WJR vice-chair Linda Rosenblatt presented him with a copy of his parents’ immigration documents, created in 1939 by the Central British Fund, the forerunner to WJR. It showed his Berlin-born mother, Margot, was 32 on arrival into the UK, whilst his shoe merchant father, Richard, from Landsberg, was 34. They settled in Hampstead.

Jerry Springer (right) with his parents Richard and Margot

“I was deeply touched to receive the records of my parents’ immigration,” he said, as he helped with the soft launch of a huge digitisation project. “These papers are a piece of family history which I will treasure forever.”

The Central British Fund helped 40,000 Jews escape to Britain throughout the 1930s and 1940s, hundreds of thousands of documents for which have sat gathering dust for decades.

But after a donor paid to make them available to the public, the charity leant the paperwork to the London Metropolitan Archives in Clerkenwell, where archivists painstakingly chronicled, photographed and uploaded each page.

Now, people can give WJR details of their parents or grandparents who came over from Europe, and the charity will then search the archives and create a package of paperwork detailing their journey and arrival.

“We want to make these family records available, without charge, to the Jewish community around the world,” said Rosenblatt. “I urge anyone who thinks we might have helped their family to get in touch.”