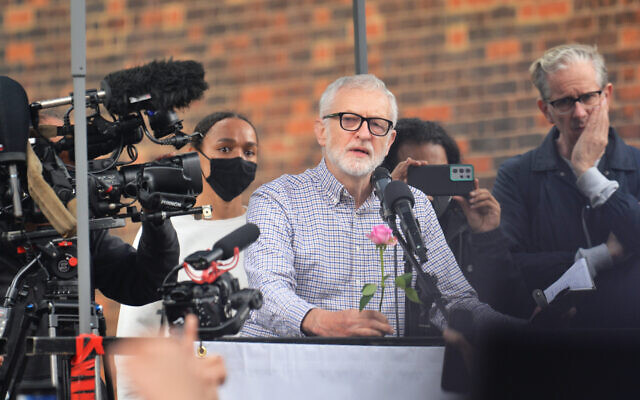 Friend of Hamas Jeremy Corbyn speaks at a event.

Former Labour leader Jeremy Corbyn appeared alongside the Palestinian ambassador to the UK at a rally in solidarity with the people of Palestine, amid the ongoing conflict with Israel.

Thousands of people marched through central London on Saturday and arrived outside the gates of the Israeli embassy in Kensington, while protests took place in other cities across the country.

Demonstrators chanted “free, free Palestine”, and held banners calling for an end to the bombing of the territory by Israeli forces.

A temporary stage was set up on Kensington High Street and organisers urged people to keep moving down the road as numbers continued to swell.

Mr Corbyn told the crowds that international action provides “succour, comfort and support” to those suffering in the conflict.

Crowds chanted “oh, Jeremy Corbyn” and threw roses as he took to the stage. 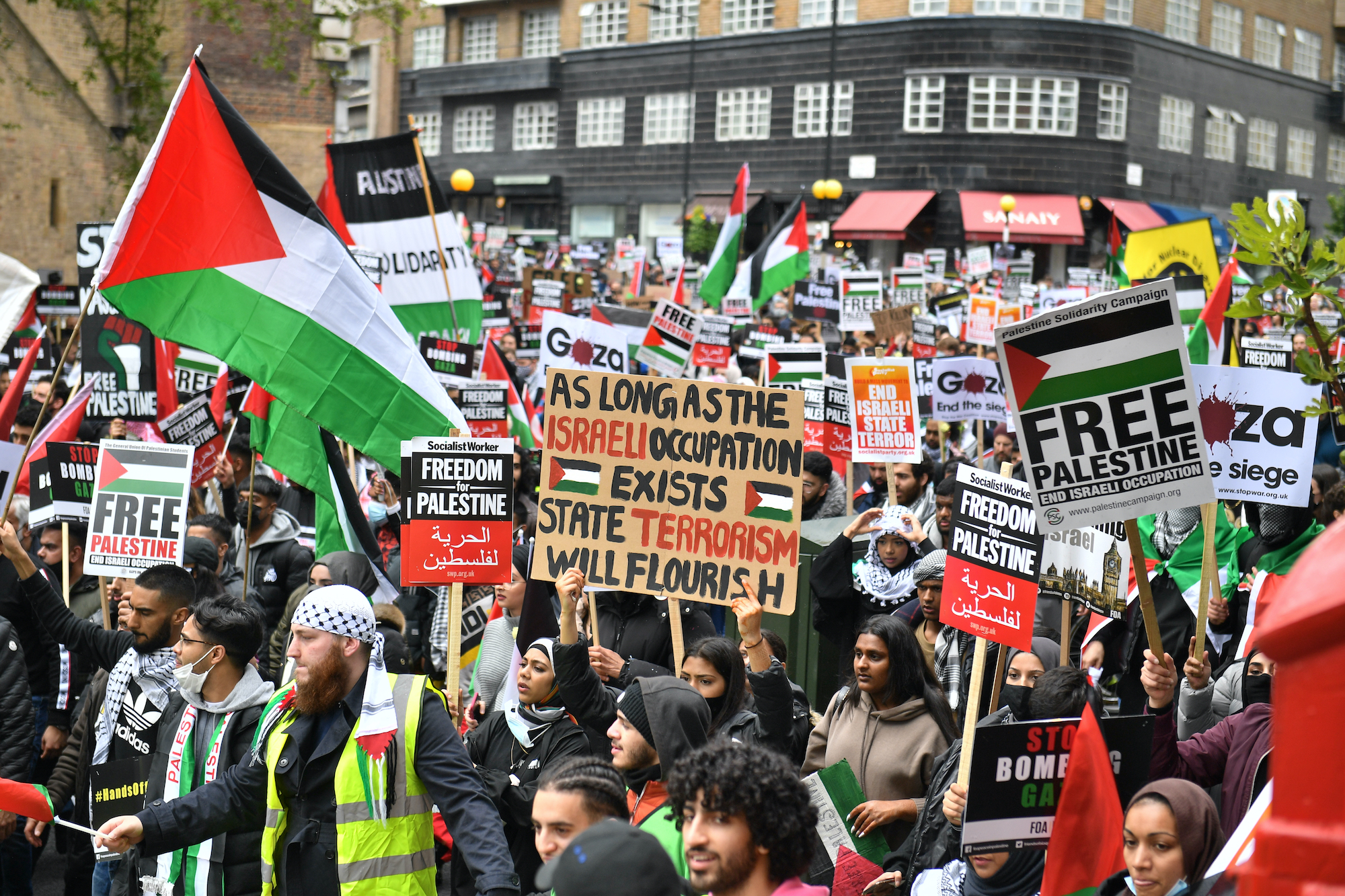 Demonstrators walk through Kensington as they make their way to the Israeli embassy in London, during a march in solidarity with the people of Palestine amid the ongoing conflict with Israel. Picture date: Saturday May 15, 2021.

“Think what it’s like being a mother or father and seeing a building bombed in front of you, knowing your family is in there, and you can do nothing,” said Mr Corbyn.

“It’s our global voices that will give succour, comfort and support in those settlements alongside Gaza and all over the West Bank, East Jerusalem who are suffering at this time.

“End the occupation now. End all the settlements now and withdraw. End the siege of Gaza now.”

Husam Zumlot, Palestinian ambassador to the UK, said: “This time is different. This time we will not be denied anymore. We are united. We have had enough of oppression.

“Today we are saying enough, enough with the complicity. Thank you for standing with us.” 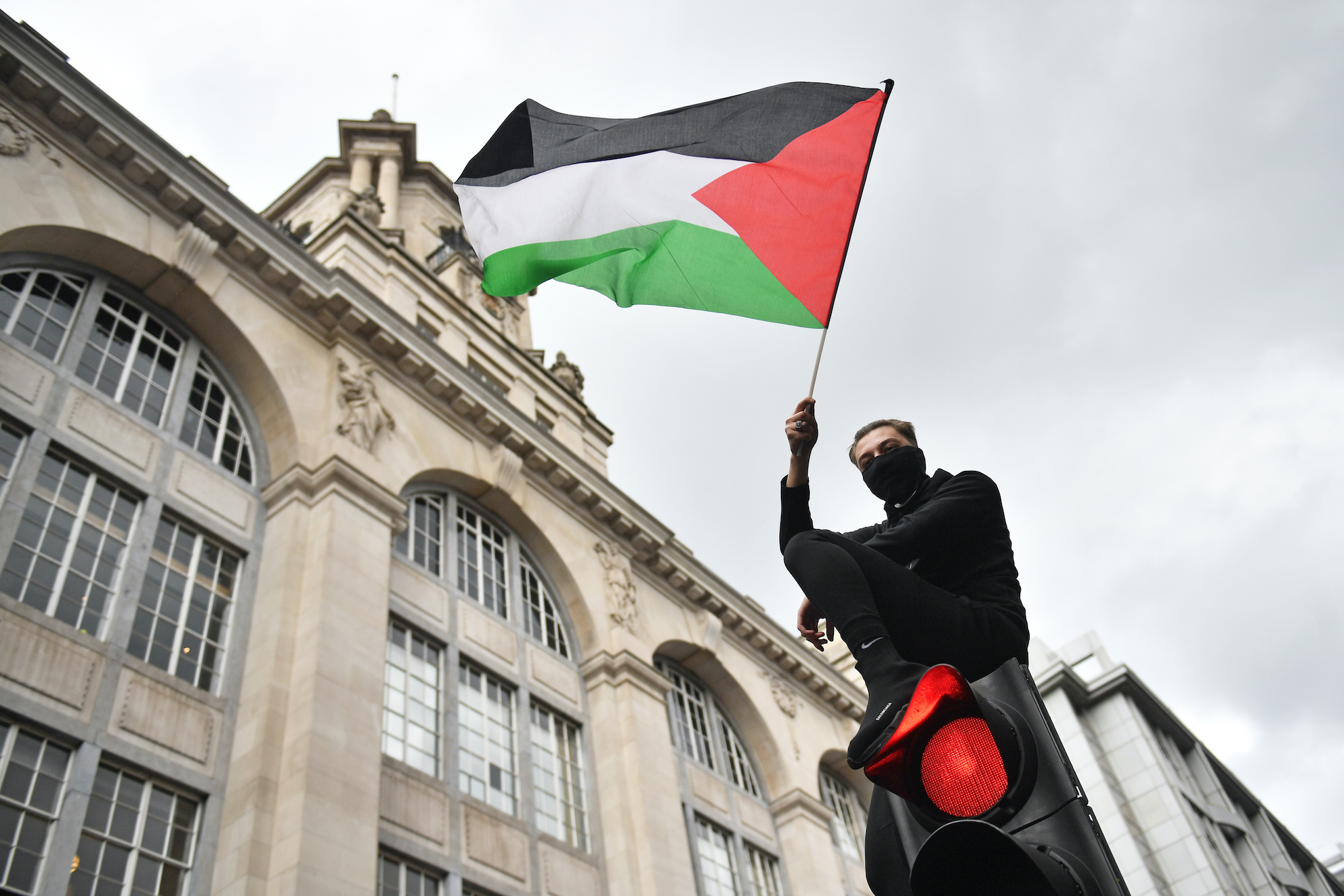 A demonstrator waves a Palestinian flag whilst sat atop a traffic light in London, during a march in solidarity with the people of Palestine amid the ongoing conflict with Israel. Picture date: Saturday May 15, 2021.

Ms Abbott told those present: “We must remember we are part of an international movement. This is a worldwide movement for justice.

“Palestinian people are having their land seized… and they are now being killed in their homes.

“All of this is illegal.”

The names and ages of the children killed in the conflict were read out and a minute’s silence was then held.

People were told to move further down the road as a matter of crowd safety, and there were cheers as organisers told them the turnout was “the biggest pro-Palestine demonstration since 2014”.

Coloured smoke was set off along Kensington High Street and some demonstrators climbed on to buildings and bus stops, while dozens of officers from the Metropolitan Police lined nearby streets.

The Met said, as of 7.30pm, officers were continuing to engage with a small group of demonstrators who remained at the scene.

It said two people had been arrested and subsequently de-arrested and that one officer is receiving treatment after suffering a head injury.

Demonstrators also gathered outside the Israeli embassy in Ballsbridge in Dublin, while a protest also took place in Bristol. 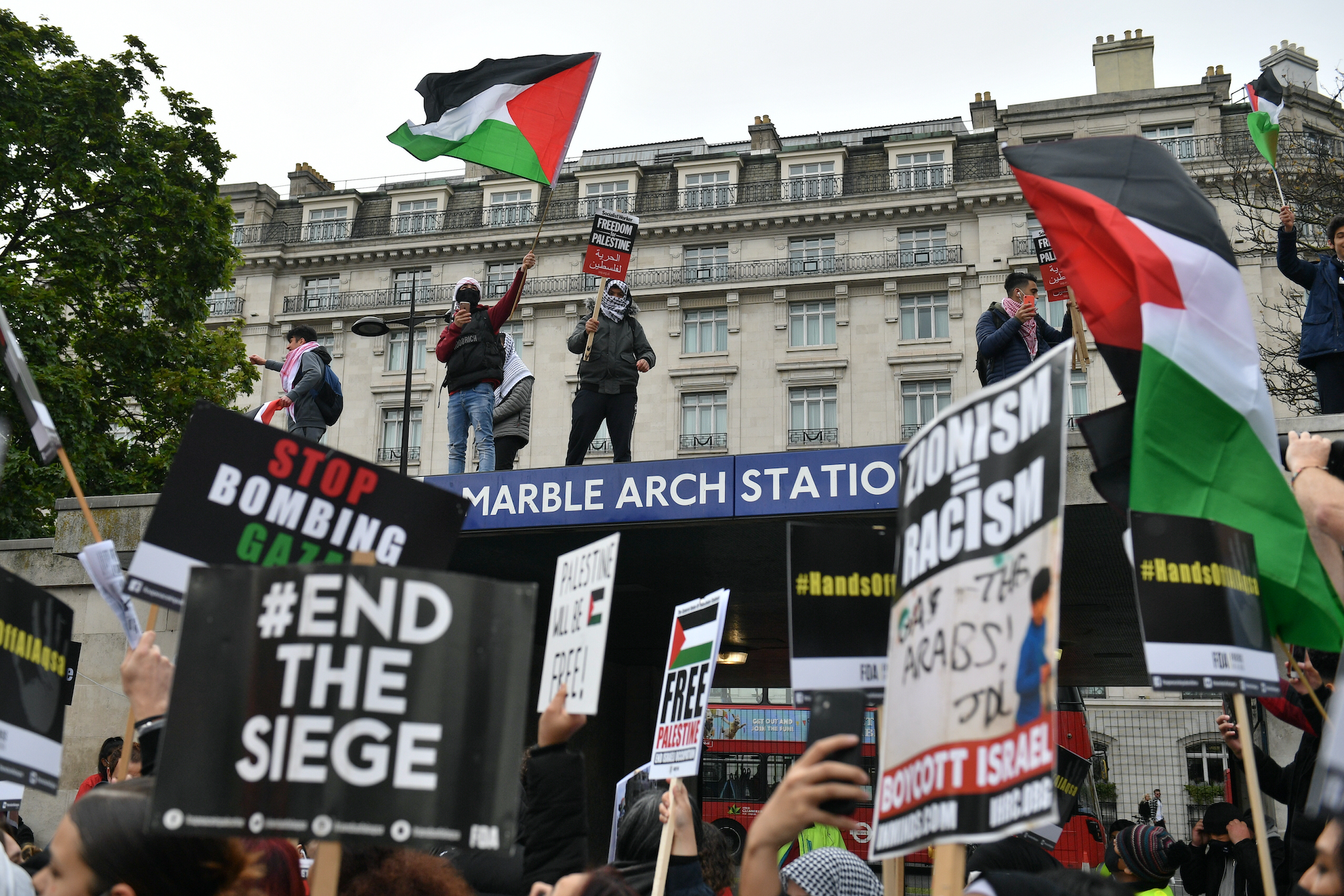 People gather at Marble Arch in central London, ahead of a march in solidarity with the people of Palestine amid the ongoing conflict with Israel. Picture date: Saturday May 15, 2021.

The protests continued as the Associated Press reported that an Israeli air strike destroyed a high-rise building that housed the AP, Al-Jazeera and other media in the Gaza Strip.

The AP said the air strike came roughly an hour after the Israeli military ordered people to evacuate the building.

The news agency said there was no immediate explanation as to why the building was targeted.

Thousands of Palestinians have been forced to flee from their homes after a week of sustained conflict. 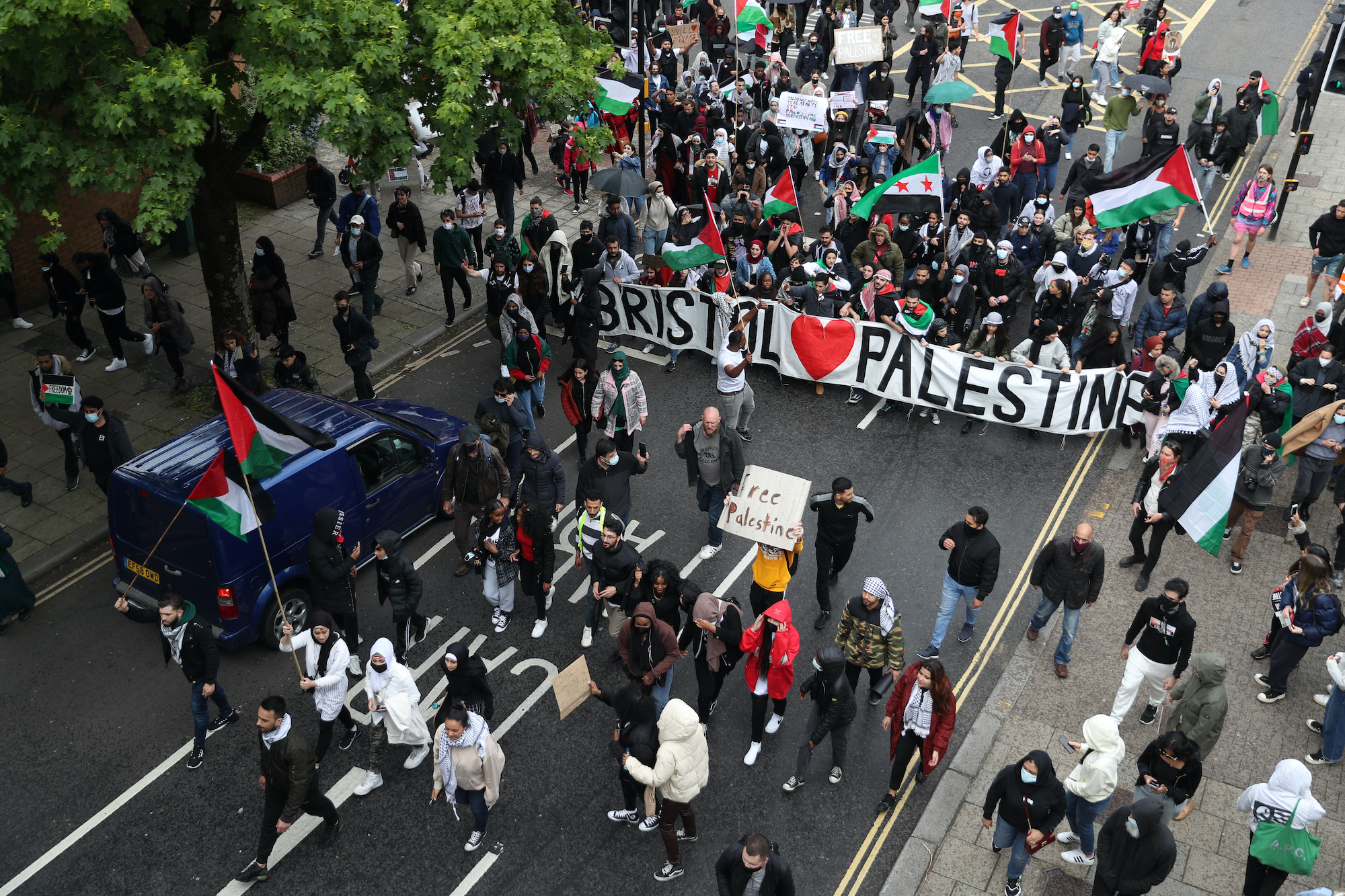 Demonstrators on Broadmead in Bristol during a march in solidarity with the people of Palestine amid the ongoing conflict with Israel. Picture date: Saturday May 15, 2021.

Since Monday night, Palestinian militant group Hamas has fired hundreds of rockets into Israel, whose military responded by barraging the Gaza Strip with tank fire and air strikes.

At least 126 people have been killed in Gaza, including 31 children and 20 women.

In Israel seven people have been killed, including a six-year-old boy and a soldier.

The demonstration in London has been organised by Palestine Solidarity Campaign, Friends of Al-Aqsa, Palestinian Forum in Britain, Stop The War Coalition, Campaign for Nuclear Disarmament and the Muslim Association of Britain.

A spokesperson for the organisers said: “It is vital that the UK Government takes immediate action.

“It must stop allowing Israel’s brutal violence against and oppression of the Palestinian people to go unpunished.

“The bombardment of Gaza which is killing civilians including children is a war crime.

“The UK Government is complicit in these acts as long as it continues to offer Israel military, diplomatic and financial support.”