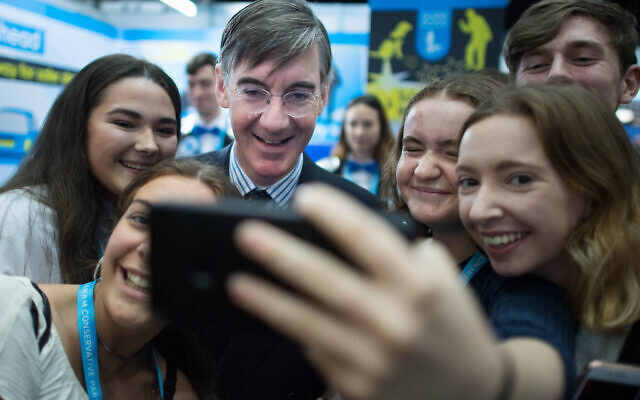 Leader of the House of Commons Jacob Rees-Mogg poses for a photograph with young people during the Conservative Party Conference at the Manchester Convention Centre.

Jacob Rees-Mogg has moved to defend religious slaughter including kosher after LBC presenter Iain Dale used a fringe event at Tory Party Conference to call for Halal meat to be “completely banned, like it is in some other countries.”

The leader of the House of Commons was taking part in the TaxPayers Alliance Question Time event in Manchester when he and the other panel members were asked if they would support new laws meaning food needed to be labelled saying whether an animal had been stunned prior to being killed.

Responding to the question from an audience member LBC’s Dale, who was chairing Sunday’s session, said:”I’ve done a few phone-ins on this.

“It seems to me – I’m going to alienate some people in the audience now – that halal meat should be completely banned like it is in some other countries.”

“I think religious freedom is very important and I think in a world where relations between various religions can sometimes be quite sensitive – the Labour Party has had a particular issue with antisemitism –  one does not want to do anything that would seem to be directed against a particular  religion.

“And yes there’s a balance in animal rights – and it’s a question of really how cruel is it.”

An audience member, who said not give his name, had mentioned in his question to the panel that on LBC radio there had recently “been coverage of meat being sold in restaurants which is halal and kosher – ie animals being slaughtered without stunning.. a religious issue.

“Yet this meat is not being labelled as non stunned meat.”

On the back of a recent announcement by the government to open a consultation on the labelling processes around meat, the audience member then asked the panel;”Would you support a law that means food is labelling saying whether the animal has been stunned or not?”

The New Statesman’s political editor Stephen Bush then said:”I”m not aware as someone who is Jewish there is a vast difference between how Muslims kill their food and we kill ours to suggest halal should be banned and kosher food should not.”

Bush then argued it would be a “particularly bad idea to mandate every restaurant who prepared it that way, to do so “because he said it would leave these establishments open to a “violent terrorist threat.”

Jewish News contacted Iain Dale and asked if his call to ban halal also meant he wished to ban kosher food – but he had not responded at the time this story was published.