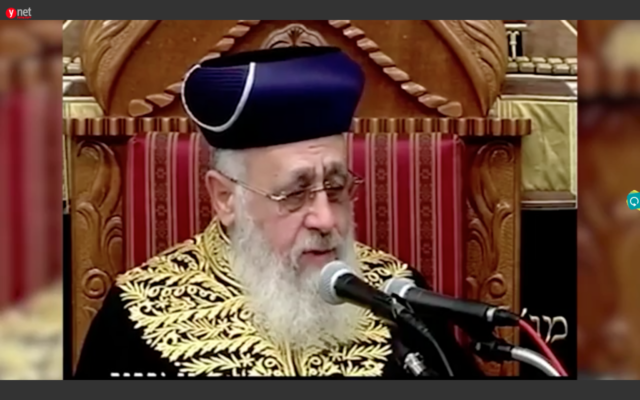 An Israel Justice Ministry official told Israeli media that the government is considering taking criminal action against Sephardic chief rabbi for likening a black child born to white parents to a “monkey” in explaining a point of ritual.

Rabbi Yitzhak Yosef made the comparison earlier this month during a Saturday evening lecture, when he was speaking of the traditional blessing of the trees that takes place during the Jewish month of Nissan.

A Justice Ministry official said Thursday that the ministry has contacted the relevant authorities to look at Yosef’s speech and decide if the remarks are incitement, the Times of Israel reported.

After he made his remarks, Rabbi Yitzchak Yosef received an unprecedented rebuke from the UK Chief Rabbi Ephraim Mirvis.

The Chief Rabbi said “The terminology used is deeply offensive and totally unacceptable.

“My office has contacted the Chief Rabbinate in Israel directly to make that clear.”

A video of the remarks was first published by Ynet, the online version of Yediot Acharonot

Yosef was explaining the blessing required when one sees an unusual or “differentiated” living being.  He cited a tradition that the blessing should be said on seeing a black person, but only under unexpected circumstances — for example, if “a monkey son came forth from them.”

He also repeatedly referred to blacks as “Kushim,” a term commonplace in Israel’s early decades but which  at least since the 1980s has been seen as a mild pejorative.

Ynet obtained a response from Yosef’s office saying he drew his analogy from the Talmud, which includes black people, elephants and monkeys — as well as people with amputated limbs, little people and those with skin lesions — as examples of “differentiated” living beings.