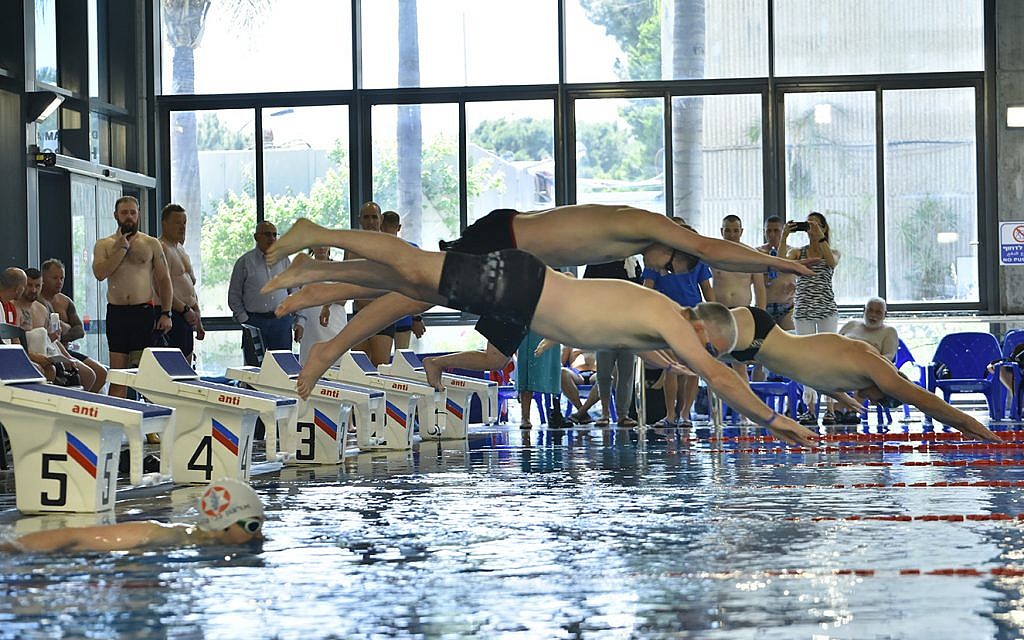 Watching a grinning James Stobbs and His four boys posing with a Chelsea cap-wearing camel for pictures at the Dead Sea, you’d never know the torment he’s endured.

Indeed, the fact he even able to make the journey thousands of miles from his home in Leeds to join more than 60 other injured British ex-soldiers was testament to what participants in the first Veteran Games described as a life-changing experience.

Two years ago, the Yorkshire Regiment Infantry soldier tried to take his own life amid the spiralling affects of post traumatic stress disorder sparked by the loss of a number of friends in Afghanistan and then of his father.

He was left a “shivering wreck” with panic attacks and was barely able to leave his house. He credits Combat Stress with saving his life and the opportunity to fly to Israel this week with giving him a target to strive for.

He said: “Before the opportunity of coming here the therapy kept me alive but I would have good days and bad days. After I decided to come to the Games with my family there were good days followed by a better day followed by an even better day. 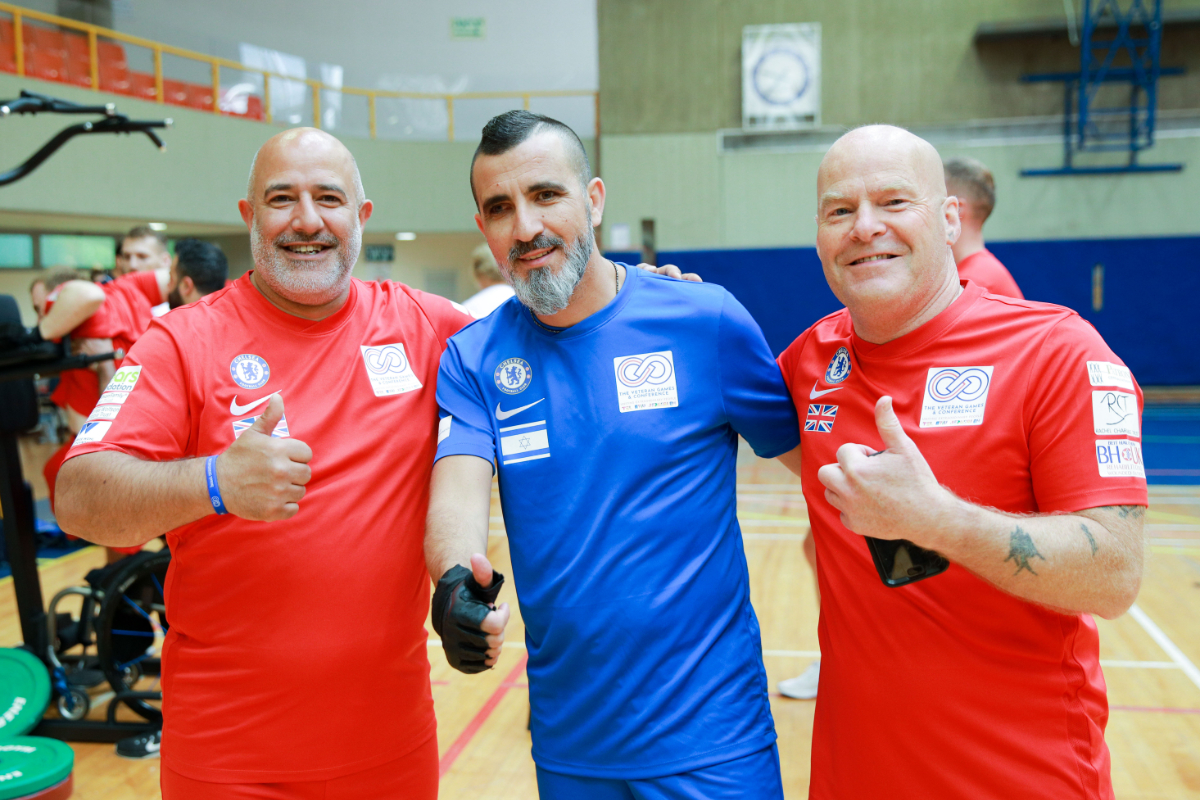 British and Israeli athletes at the Veterans Game in Israel

“Being here is 50 percent of my exposure therapy so when I get back to Leeds I’m going to have a lot more confidence. It’s been amazing for my rehabilitation. If not for the Games I’d probably still be sat in my living room feeling very sorry for myself. I hadn’t smiled for years.”

But over the five-day trip that smile was a permanent fixture on the 32-year-old’s face – partly thanks to the opportunity to spend quality time with his wife and kids aged two to 12. ‘It’s brought us closer together because when I was suffering in the house I wasn’t a father figure. For them to see me come out of my shell and compete, hopefully they think a little bit better of me now.” Eavesdropping on to his dad being interviewed, his oldest son Kyle interrupts with words that must have been music to his ears: “What do you mean hopefully?” 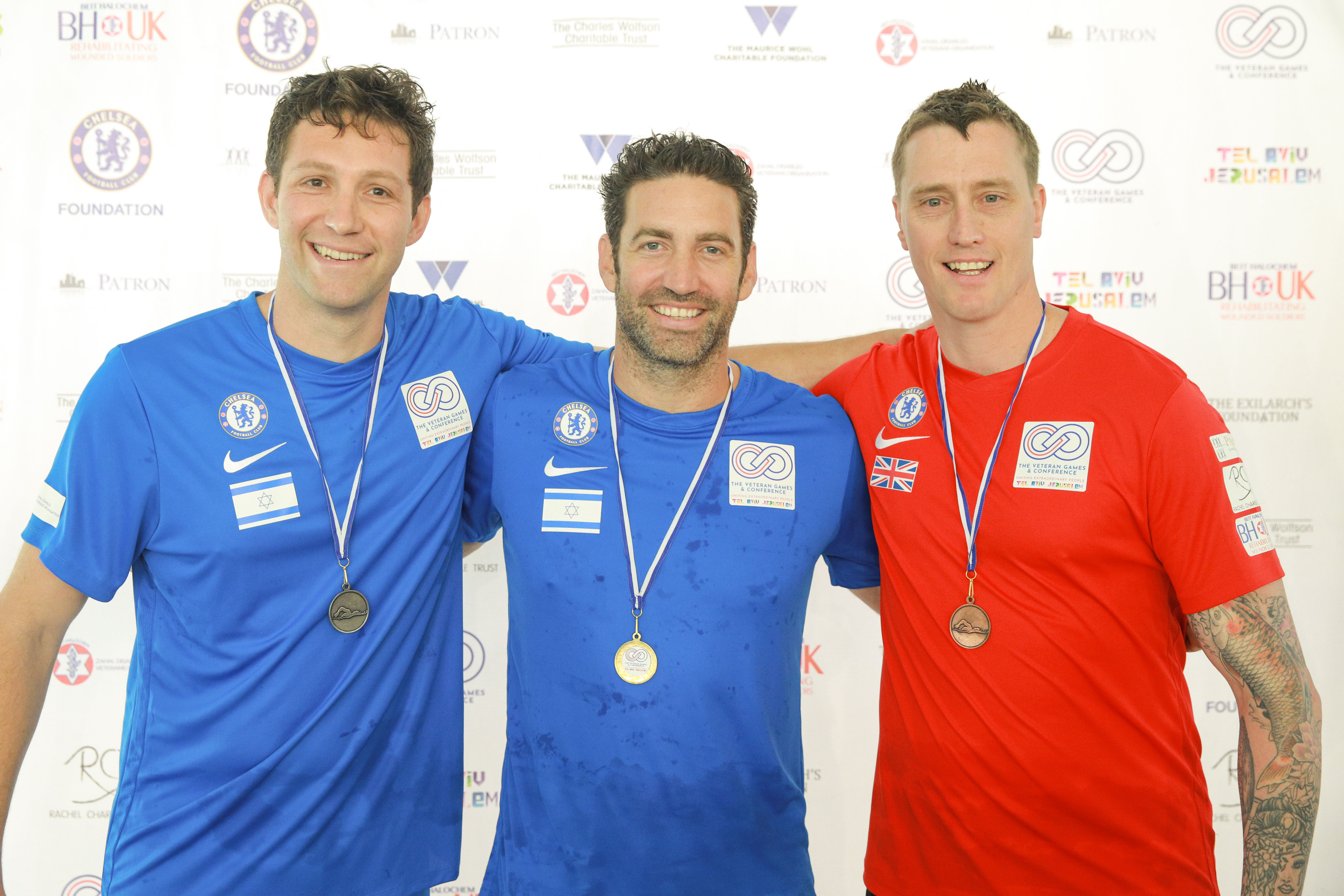 British and Israeli athletes at the Veterans Game in Israel

The inaugural event – conceived and developed by Beit Halochem UK chairman Andrew Wolfson together with the Israeli Embassy – was inspired by the Prince Harry-founded Invictus Games and funded by leading British Jewish philanthropists. It brought together British and Israeli veterans to compete in swimming, rifle shooting and X-Fit (a range of strength and endurance exercises) at Beit Halochem’s state-of-the-art centres in Tel Aviv and Jerusalem.

Like Invictus, it recognised the capacity for sport to boost rehabilitation. But it was complimented by a mental health conference featuring experts from both countries.

And the main programme provided more time for sharing experiences of war and recovery and for families to spend quality time together, according to Matthew Neve, who won gold in archery at Invictus two years ago. The RAF veteran suffered a breakdown after the Iraq War when he was charged with loading on to vehicles the bodies of fallen colleagues – before eventually discovering a passion for sport that enabled “me to get out of my head”. 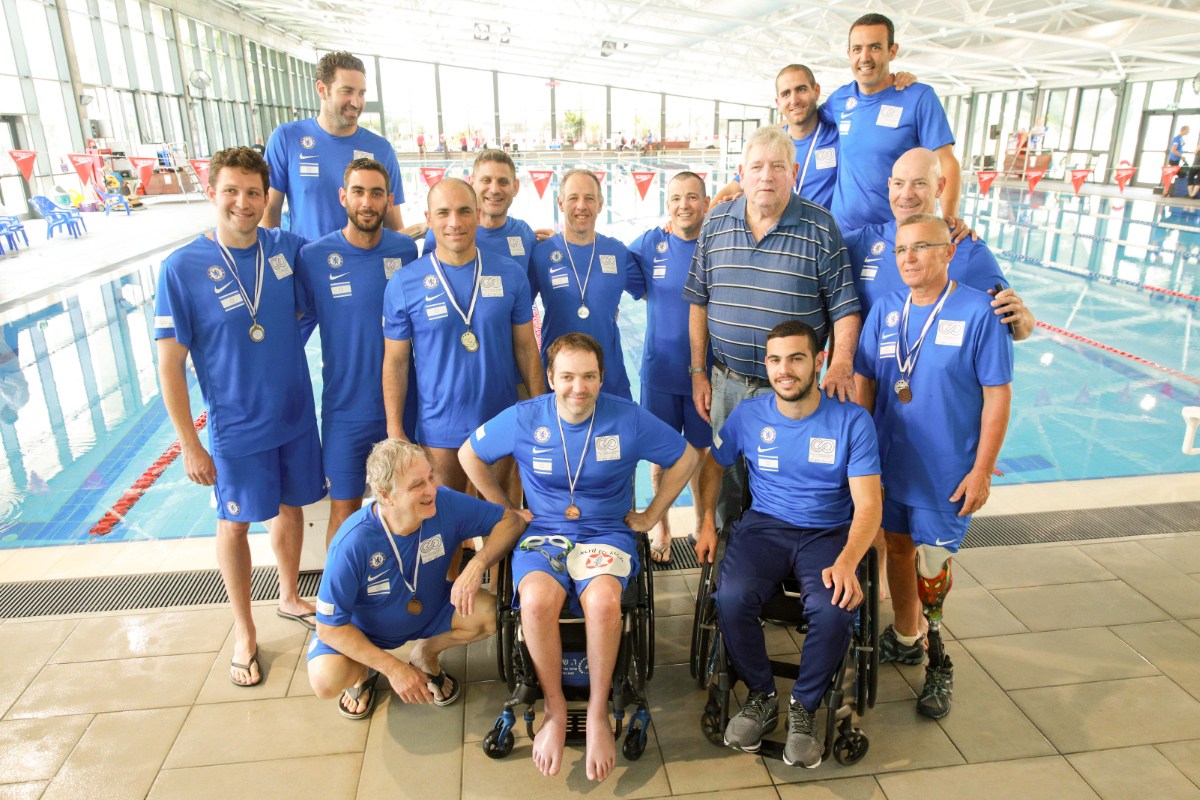 Israel’s team at the Veterans Games!

He said it was often the families who faced the “brunt of angry outburst and not wanting to get out of bed” and the Veteran Games had enabled them “to meet and talk to other families who’ve been through similar. It helps expand their support network like it has mine. There’s a few of us who’ve got quite close and we look forward to staying in touch”.

Saying he’d found a new sporting passion in shooting “much to my wife’s dislike as I now want to buy a rifle to take part”, he added: “It’s also been great chatting to the Israeli guys because we realise we have had similar experiences and also rely on sport.”

He acknowledged that news coverage had initially made his wife Zoe concerned about bringing their daughters to Israel but the couple are now considering coming back for a family holiday. “It’s a beautiful country,” Zoe said. “Everyone has been so kind.” 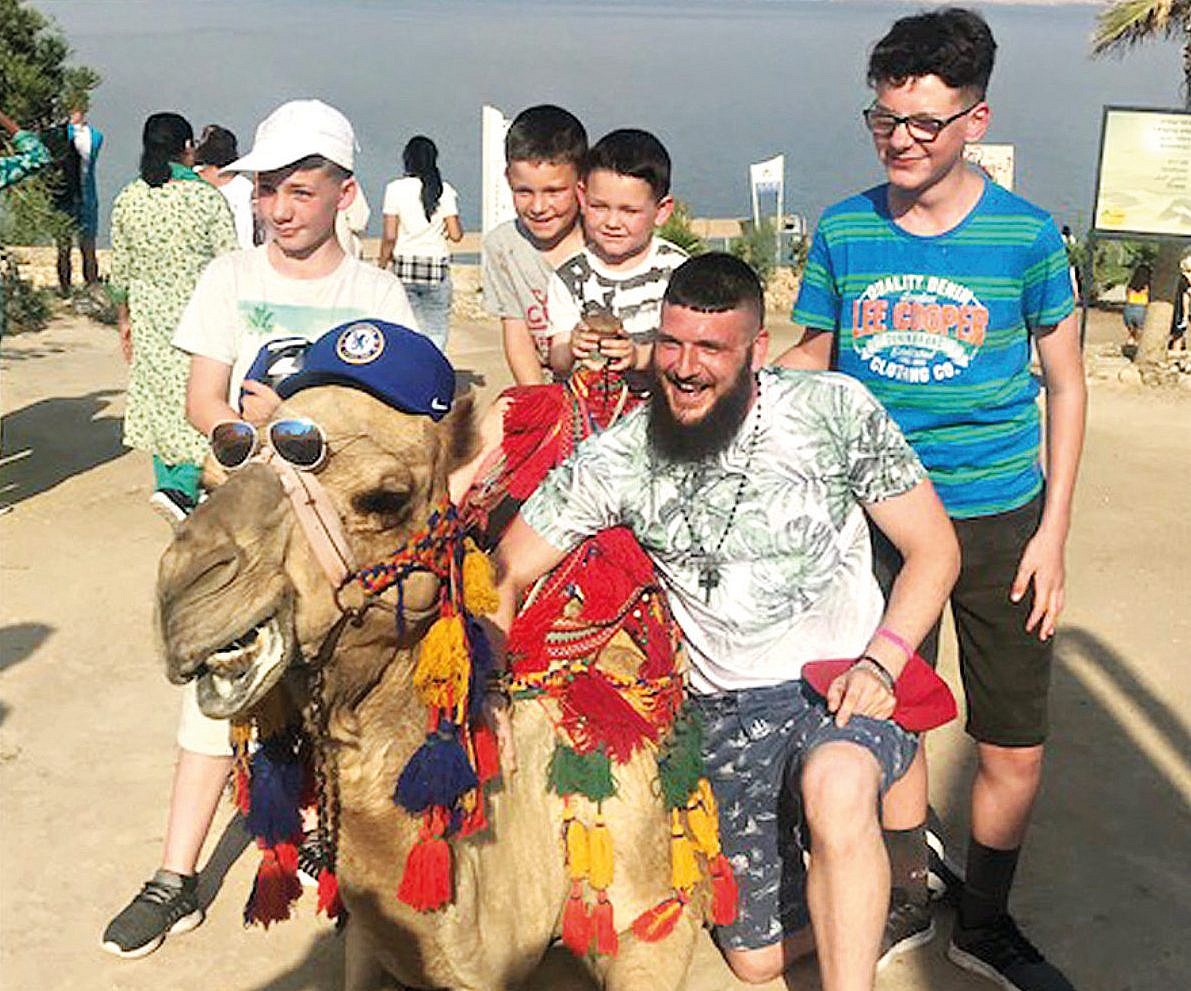 James Stobbs and family at the Dead Sea.

The group were treated like the heroes they are from the start on Sunday when they were waved off at Heathrow by Ambassador Mark Regev. On arrival at the 5 star Carlton Hotel, they received branded rucksacks, water bottles and matkot bats featuring the Games motto ‘Uniting extraordinary people’.

Food was never far away: one participant pointed out over dinner in Tel Aviv port the next day that they’d just taken part in a culinary tour of the city which had directly followed lunch at Beit Halochem. Other highlights included football training with coaches from Chelsea FC for youngsters, dinner in the Judean desert and tours of the Old City in Jerusalem . 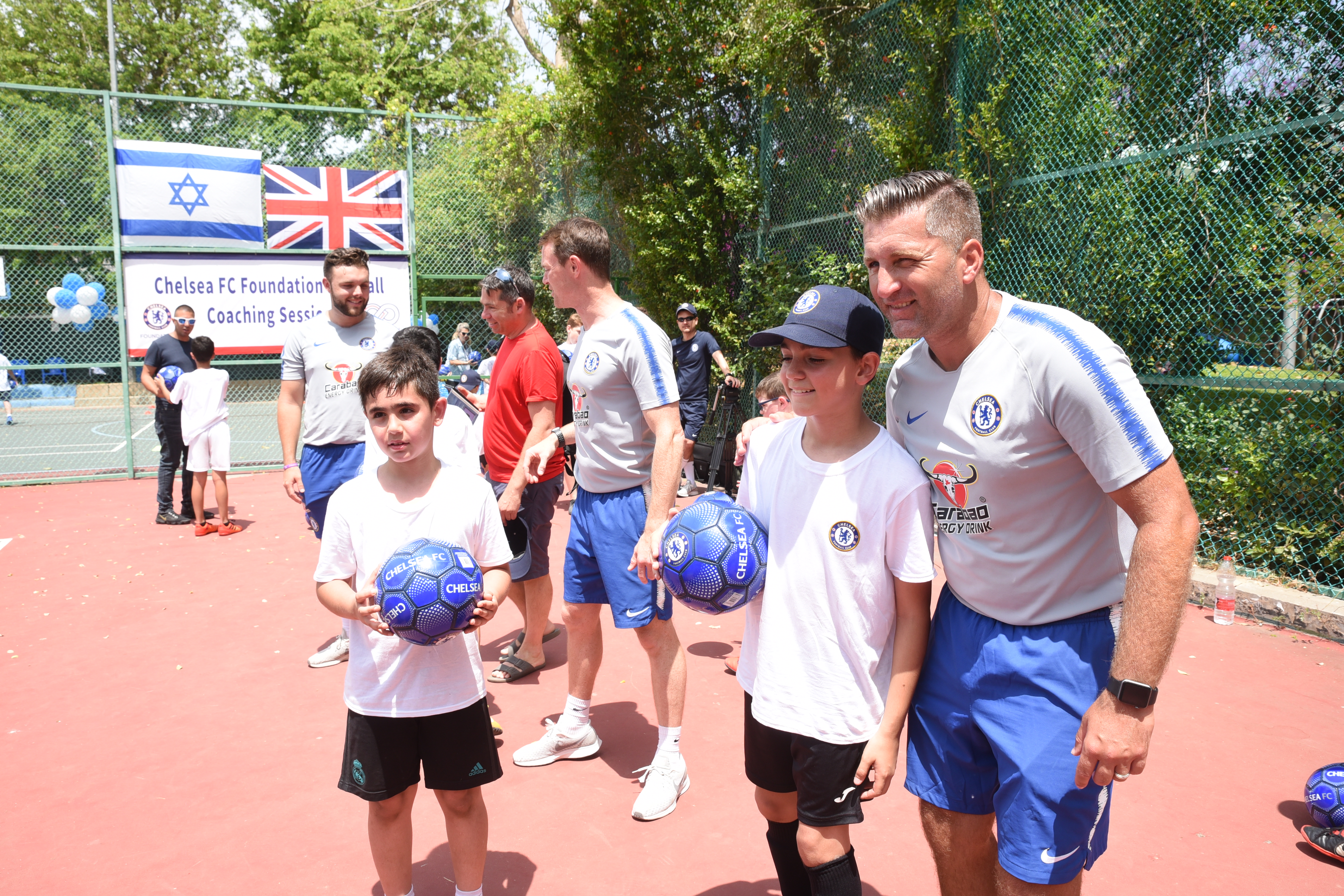 Chelsea staff with young people at the Veterans Games!

It’s little wonder that by day two several participants were proudly uttering ‘sababa’ in answer to almost anything, while others set their sights firmly on finding an Israeli wife.

RAF Benevolent Fund ambassador Joanna Martin, who competed in shooting after a training accident left her in a wheelchair, marvelled at the “amazing” facilities at Beit Halochem as she got to know fellow charity ambassadors she’d never previously met.

While she said Gaza was the first thing that came to mind at any mention of Israel before this week, it was clear she had been transformed into a cheerleader for the country. The 57-year-old said: “I’m definitely going to go home and tell people they have to go to Israel.”

While this was one occasion when the taking part was more important than winning medals, the participants strained every sinew to push their war-scarred bodies to the limits, often inspired by the performances of others.

The presence of Paralympic swimmer Hanoch Budin was a reminder of the heights injured veterans can reach. One of Israel’s most decorated athletes, he credited the family-friendly facilities at Beit Halochem with being instrumental in his success.

He said: “We have one of the best pools in the world and the best people helping. “Everywhere you go you have the best facilities and the best people helping you to achieve your best results,” he said. “If I couldn’t have brought my kids to the kindergarten here while I trained I don’t think I could have done what I have. When you’re coming home the thing they see most is your disabilities – but then they come here and see you can excel. They understand it’s not something which acts a barrier to achieve. 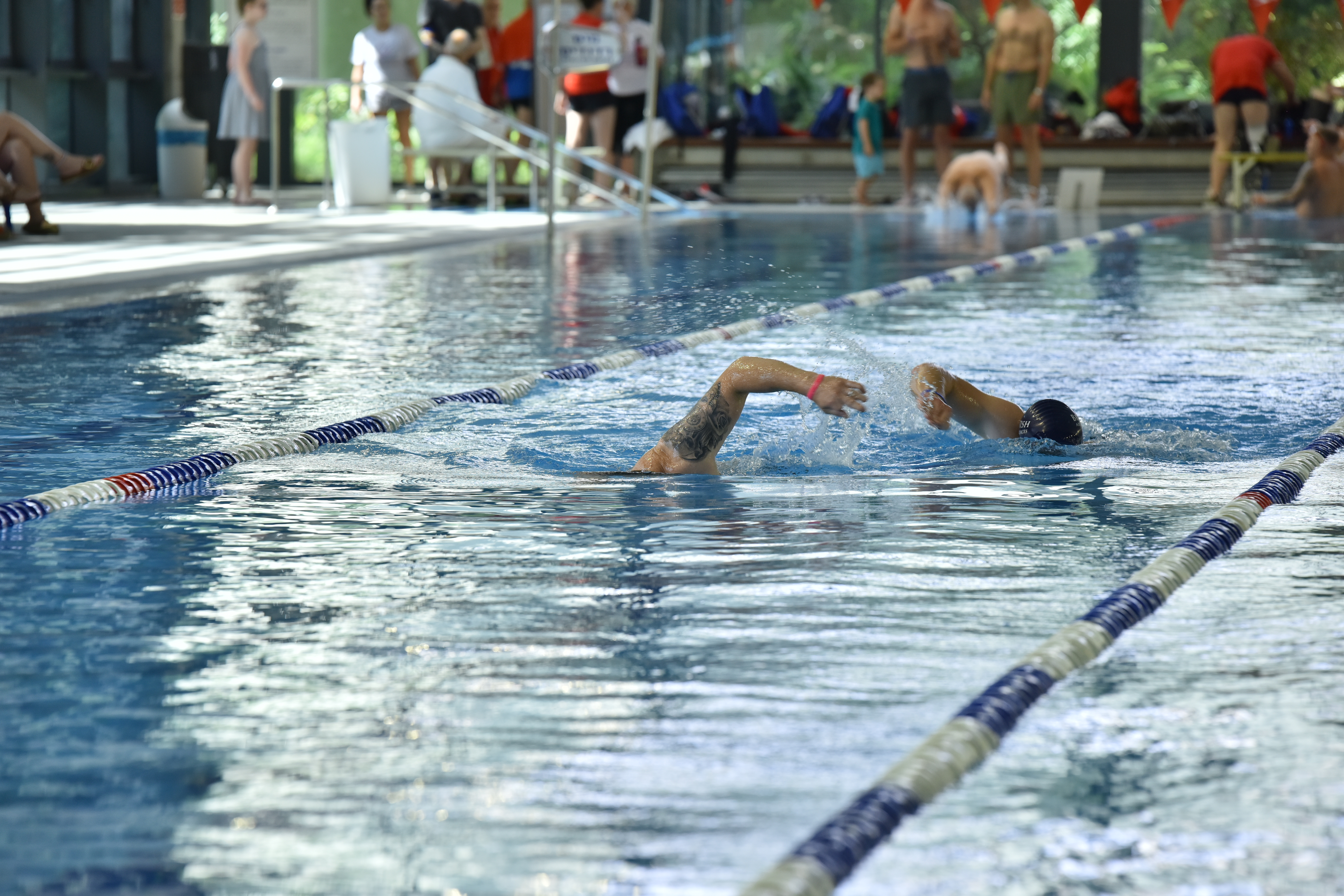 In the pool at the Veteran Games

After meeting some of the British delegation for drinks, he said: “We have so much in common. I made great friends. Once the veterans go back home they will be great ambassadors for Israel and will also better understand the Jewish people back in the UK.”

There were constant reminders through the week of the deadly serious backdrop to the trip. Jake Saxon, who has been treated by Rock 4 Recovery, said the environment had allowed one former veteran to open up to him about his suffering for the first time.

Participants also attended a memorial ceremony at the British war cemetery in Ramle at which King David was remembered as the bible’s most famous sufferer of combat-related trauma . Clearly moved by the visit, former Royal Marine Jerome Scherrer said: “It’s humbling they have this in Israel.” Joking that he might move to the country, he added: “We used to joke when I was in the forces about joining the IDF. They always seem to know what they’re doing and they look after their veterans so well.”

Wolfson and BHUK chief executive Spencer Gelding vowed this trip would not be the end of such projects.

The Israeli Embassy’s Michael Freeman, who helped organise the initiative, said: “When we planned it we had a grand vision in our minds and it’s exceeded all those expectations. If there are people who want to make it happen maybe in two years time we can have another round with more countries joining in and this can become one of the key events in the sports and recovery programme for injured veterans from Britain, Israel and around the world.”

As a patron of the Royal Marines Charity, Businessman and philanthropist Keith Breslauer ensured it sent the largest contingent to the Games.

He said: “I have worked very hard over many years to drive tikun olum, to serve our purpose to help make the world a better place. By being proud of my faith and heritage while helping injured veterans, I had the opportunity to introduce my friends in the British armed forces to the greatness of Israel and to share through sport and social experiences support and positive reinforcement.”