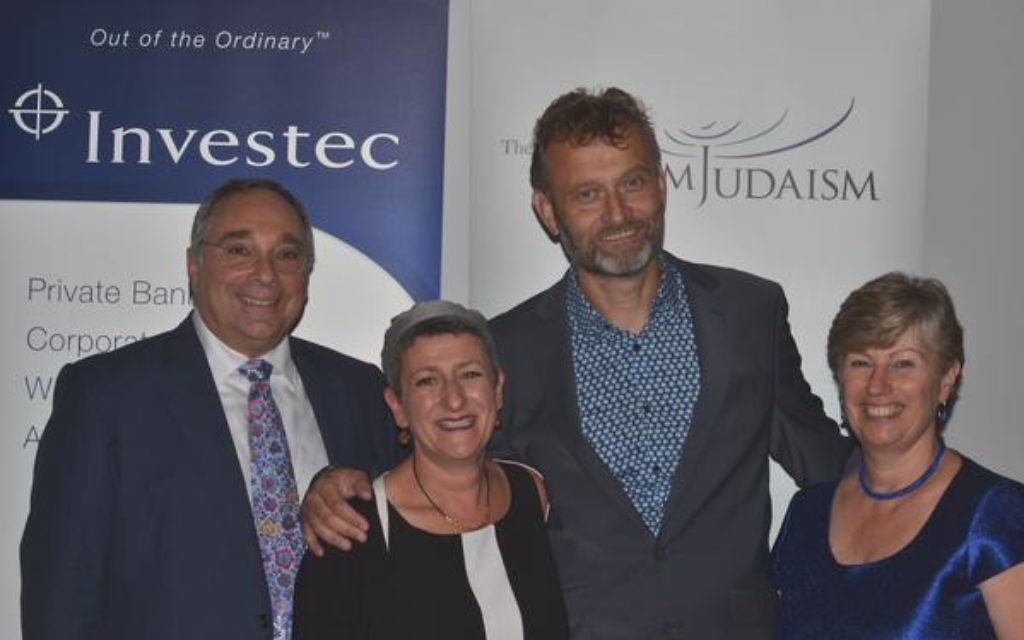 As the guest speaker at the event, the ‘Mock the Week’ and ‘Outnumbered’ star paid tribute the community’s “absolutely fantastic” tradition of giving during an entertaining address, full of humorous anecdotes.

He focussed on his encounters with religion, having grown up as the son of a Bishop but surrounded by the Jewish community.

Dennis paid warm tributes to Judaism’s tradition of debate as “informed, intelligent and interesting” whilst noting the “great traditions” of food and family, and of course the “comedically rich heritage”

Dennis speaking at the event. (Source: Reform Judaism on Twitter)

The evening featured a tribute to West London Synagogue (WLS) as the community celebrates its 175th anniversary.

Mike Grabiner, past Chair of the World Union for Progressive Judaism, presented WLS Chair Jill Todd and Senior Rabbi Baroness Julia Neuberger with a framed copy of a sermon from a 1922.

Grabiner then added that the synagogue has “always been a beacon of innovation; of sincerity; of progress and of leadership”.

An appeal was made by Stephen Moss, President of WLS and a former Chair of Reform Judaism, paying tribute to the movement’s “vital and relevant” work “providing strategic leadership, delivering change, giving stability and suggesting a compelling vision of Jewish life”.

The Movement for Reform Judaism’s Annual Dinner, supported by Investec ,and took place in at the Montcalm Hotel near Marble Arch in London on 10 September.

Thanks to all who made our Annual Dinner sponsored by Investec such a special occasion! http://t.co/JUXEPggajg pic.twitter.com/eThZaoJl2J