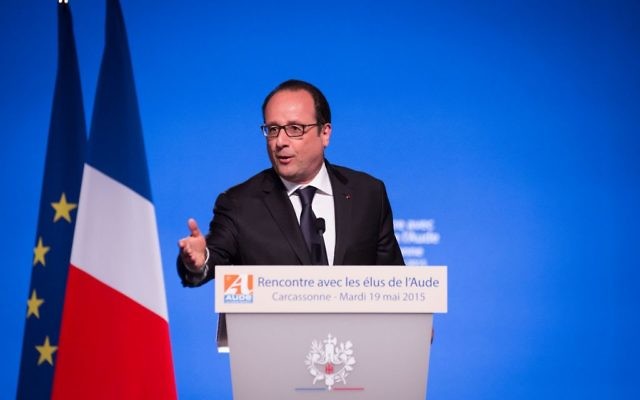 French President Francois Hollande said he will not seek another term, clearing the path for a presidential bid by his pro-Israel prime minister, Manuel Valls.

Hollande, whom polls give a single-digit approval rating, surprised many with his statement Thursday in a televised speech. He is the first president to decide not to run for a second term in at least five decades.

“I am aware today of the risk that going down a route that would not gather sufficient support would entail, so I have decided not to be a candidate in the presidential election,” Hollande said in his address from the Elysee Palace.

Valls, who is seen as a hardliner on law-and-order issues within his left-wing Socialist Party, has said in recent week that he is “ready” to run for president but has not yet announced his candidacy. Still, he is seen as the favourite to be the presidential candidate for the Socialists in the second and final round of voting, which is scheduled for May 7, according to Le Figaro.

Valls, who is married to a Jewish woman, is the first French prime minister who publicly denounced anti-Semitism as a form of or portal to anti-Semitism. His strong statements in favour of Israel and French Jewry have allowed him to consolidate considerable popularity and support among French Jews.

He received a hero’s welcome on Jan. 11, 2015, when he was among the few politicians who showed up at the Hyper Cacher in eastern Paris to join the thousands of French Jews who had gathered there hours after a jihadist gunned down four shoppers inside the kosher supermarket.

Valls has explicitly linked his pro-Jewish views to his Jewish wife, the violinist Anne Gravoin, saying in 2011 that his marriage connected him “in an eternal way” to Israel and the Jewish people.

If Valls is nominated as the Socialist presidential candidate, he will run against Marine Le Pen of the far-right National Front party and Francois Pillon of the Republicans.

In an interview earlier this week, Michel Zerbib, news director at Radio J, the French Jewish station, said that whereas Fillon’s tough stance on Islam may appeal to many Jewish voters who feel threatened by Muslim extremists, “if Valls runs he could change all that because of the considerable popularity he enjoys” among French Jews.