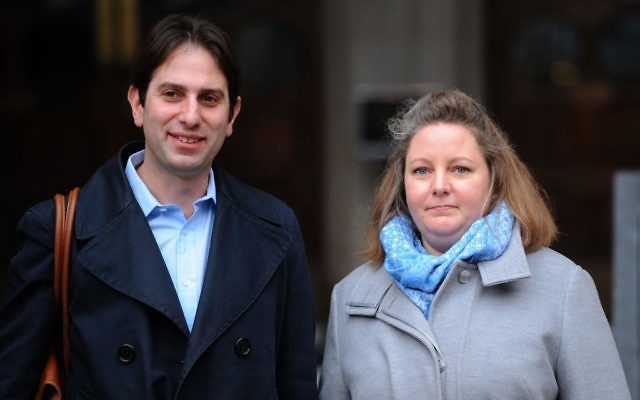 A heterosexual couple who object to the “patriarchal baggage” of marriage have lost their latest battle for the right to enter into a civil partnership.

Rebecca Steinfeld, 35, and Charles Keidan, 40, want to secure legal recognition of their seven-year relationship through that route – but are prevented because the Civil Partnership Act 2004 says that only same-sex couples are eligible.

The Jewish academics, who live in Hammersmith, west London, and have a 20-month-old daughter, say that the Government’s position is “incompatible with equality law” .

But on Tuesday, the Court of Appeal dismissed their challenge.

Karon Monaghan QC told Lady Justice Arden, Lord Justice Beatson and Lord Justice Briggs that the issue was whether the bar on opposite-sex couples entering into civil partnerships was incompatible with Article 14 of the European Convention, which relates to discrimination, taken with Article 8, which refers to respect for private and family life.

She said: “They wish very much – and it is of very considerable importance to them – to enter into a legally regulated relationship which does not carry with it patriarchal baggage, which many consider comes with the institution of marriage.”

Dan Squires QC for the Secretary of State for Education, who has responsibility for equalities within Government, said that a decision was taken, after two public consultations and debate in Parliament, not at this stage to extend civil partnerships to opposite-sex couples, abolish them or phase them out.

It was decided to see how extending marriage to same-sex couples impacted on civil partnerships before making a final decision which – if reversed in a few years’ time – would be disruptive, unnecessary and extremely expensive.

He described the judge’s decision as “unimpeachable”.