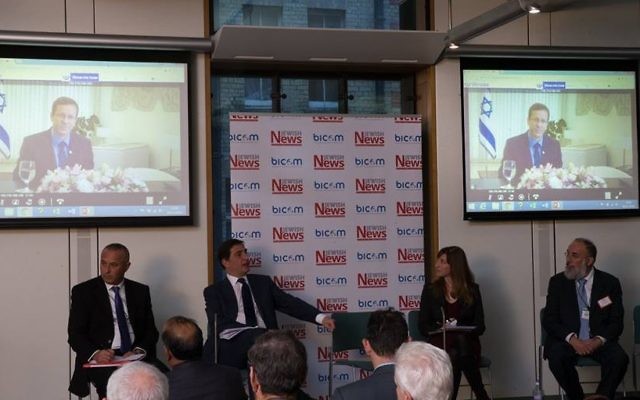 Israel’s Zionist Union leader, Isaac Herzog, has “vehemently” denounced the country’s proposed Legislation Bill, characterising it as “actually a battle over who is going to be the leader of the right,” Naftali Bennett or Benjamin Netanyahu.

Mr Herzog was speaking by video link at Wednesday’s Jewish News/Bicom Shared Strategic Challenges conferences. The bill is an attempt to legalise Jewish settler outposts built on privately-owned Palestinian land in the West Bank. One such settlement is Amona, near Ramallah, which the bill would reprieve from demolition if it becomes law.

The Knesset vote has now been delayed until next Monday, December 5. Mr Herzog told Bicom director James Sorene: “A small group within the coalition, based on the settlers’ movement of Jewish Home, together with strong Likud elements, is causing the government to move on the Legalisation Bill, which is averse to all we know about the rule of law and international law. I understand the personal circumstances of the citizens of Amona, they are good Israelis, they have been there for 20 years, but the Supreme Court ruled unanimously two years ago that it must be evacuated as it is on private Palestinian land, and we must abide by the ruling, with all the pain it entails.”

The Opposition leader said he had recently quoted a speech made by Yitzhak Rabin in his first term as prime minister in 1976. “He said, once the countries of the region recognise Israel, once the region crosses the Rubicon, all the rest is solvable — and it is true.

“The region has recognised Israel, big time: the moderate Sunni nations, our immediate adjacent neighbours, Egypt and Jordan. There is what is called the mini-Arab-Quartet of the UAE, Saudi Arabia, Egypt and Jordan, which, together with Israel, can pursue a unique golden opportunity, which has been there for months and may go away because of regional circumstances”.

Mr Herzog added: “Unfortunately there is no seizing of the moment”, revealing that this was behind his thinking when he tried to persuade Prime Minister Netanyahu to bring the Zionist Union into a National Unity government. Instead, the prime minister had chosen to make Avigdor Lieberman his defence minister, and he did not think it likely that the offer to join the government would be renewed..

Declaring that there was “a general fatigue and disappointment with PM Netanyahu”, and turmoil on the right, Mr Herzog also said he hoped to attract Yair Lapid’s centrist group, Yesh Atid, to join his Zionist Union bloc in the Knesset. “Today 70 per cent of Israelis say the country is going in the wrong direction. In order to change that we need an increased centre left party to change the leadership of Israel.”

He said he had made this point to Yair Lapid a number of times “but he totally rejects it. He believes he can win from his position. I beg to differ.”

James Sorene asked the Labour leader to clarify what had taken place between him and the leader of the British Labour Party, Jeremy Corbyn. Mr Herzog spoke of the close and historic ties between the two parties and said that he had offered Corbyn the opportunity to come to Israel, visit Yad Vashem and “understand the Israeli story — but unfortunately I got a refusal. But I hope he will reconsider”.

Mr Herzog and MK Michael Oren were both unable to attend the conference in person because of the Legislation Bill in the Knesset.