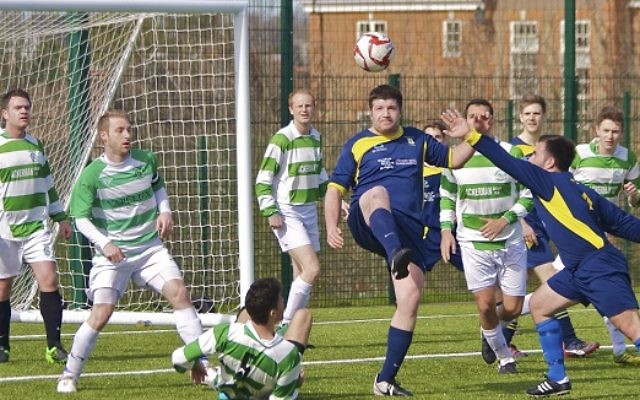 Hendon United moved back to the top of the Premier Division after beating Brady 4-0 on Sunday morning.

GOALS OF THE WEEK:

1) Dovi Fehler (Hendon United) – Ball arrived at Dovi’s feet on the edge of the box, before  a tight touch and quick fire shot through the defenders legs landed into the bottom far corner

2) Sam Modlin (Oakwood B) – A stunning lob over the Temple Fortune goalkeeper with the outside of his foot, for what was his fourth goal in three games

3) Oli Sade (Los Blancos) – Picking the ball up on the halfway line, dribbled around four players before slotting home comfortably with his left foot

5) Ben Winters (Maccabi London Lions Blue) – A short corner played to him on the left hand side of the box, beat one man and from the top left corner of the 18-yard box, hit a stinging shot which was moving all over the place and nestled into the top right hand corner

6) Daniel Garfinkle (Fairlop FC) – Bradley Gayer and James Jaconelli combined to play in Garfinkle, he skipped away from his man leaving himself one-on-one with the goalkeeper, which saw him cooly open his body and bend the ball around him into the back of the net

SAVES OF THE WEEK:

1) Ben Law (North London Raiders B) – Stayed up big and strong when facing a Blancos striker bearing down on him, did brilliantly to smother a goal-bound effort.

QUOTES OF THE WEEK:

3) Aaron Dias (Fairlop FC) – “They are currently renaming the Cruyff turn to the Berkeley turn. He sent one of Catford’s midfielders to the local Nisa”

MACCABI LONDON LIONS BLUE (PREM) 3 SEDGLEY PARK 2
Lions booked their place in the last eight of the cup as they battled their way past their Mancunian opponents, who finished the game at Rowley Lane with eight men

Jordan Aspis, Ben Winters and Michael Kenley were all on target for Samuel Marchant’s side. He told jewishnews.co.uk: “This was a strange game to say the least. We expected a tough physical battle from the Manchester side and they definitely showed that.

“We weren’t at our best at all today, but at the end of the day we’ve won the game, we are in the quarters of the cup and we have an away day in Manchester, so we can’t really complain!

“We found it difficult to break down the 10 men of Sedgley after their early red card, but we dug in deep and kept composure. Going 2-1 down after half-time was difficult to take but we reacted well and took more control of the game.

“Two further red cards followed for Sedgley, both for bad challenges and the game of course was there for us, we just had to work hard and grind it out. Winters scored a worldie with ten minutes to go and Kenley got the winner in the final minute. It was a struggle at times for us but we did what had to be done and that is all that matters.”

BRADY MACCABI 0 HENDON UNITED SPORTS 4
Hendon went back to the top of the table thanks to this convincing win over Brady.

Rocky Spitzer, Zac Lewis, Ari Last and Dovi Fehler scored the goals for the visitors which saw them leapfrog Oakwood to lead the way at the top by two points.

Player-manager Greg Corin told jewishnews.co.uk: “It was another dominant display from our team and we’re delighted to have a third win In four games against a good Brady side.

“Our attitude was to be really focused from the first minute and we didn’t relent, pressing and keeping up the pressure all game. I’m really pleased with how we performed. It’s easy to slip up and be complacent when you have a fixture situation where you play the same team a few times in quick succession.

“We now head in to a big league fixture against Redbridge off the back of a couple of really good team performances and hopefully we can take that level of confidence through to our next game and make a good account of ourselves against a team who have some fantastic players and will no doubt be a real challenge for us.”

CAMDEN PARK 1 MACCABI LONDON LIONS WHITE 5
The Lions moved up to third spot thanks to this comprehensive win over bottom side Camden – leaving them 10 points adrift at the bottom of the table.

LOS BLANCOS 3 NORTH LONDON RAIDERS B 2
Raiders spurned the chance to leapfrog Faithfold at the top of the table as they were somewhat surprisingly beaten by the Blancos boys.

Oli Sade’s double – including a Lionel Messi-esque solo stunner which saw him take on four players from the halfway line – and Jamie Kutner’s strike seeing the hosts to a stunning win.

David Dinkin’s close-range finish and Anthony Goodmaker’s header from Mark Leader’s free-kick kept them in the game, with manager Doron Salomon telling jewishnews.co.uk: “We were our own worst enemies today. We gifted Los Blancos all three of their goals and put unnecessary pressure on ourselves. It would be remiss not to acknowledge that the goals still had to be finished and they were very well taken.

“There are only so many times we can rely on a second half performance to fix our first half errors and today no matter what we tried we couldn’t make anything click. It was a bad result and a bad performance. After a good run it halts our momentum but we’ll be ready for a huge game next weekend against Faithfold.”

OAKWOOD B 4 TEMPLE FORTUNE A 0
Oakwood moved to within three points off top spot thansk to this comfortable win against the bottom side.

Two goals from Sam Modlin, coupled with Tom Prais’ strike and an own goal sealing the win for Jason Stein’s side.

Stein told jewishnews.co.uk: “A thoroughly professional job from the team today. It was a must win game for us. We couldn’t afford to drop points.

“We moved the ball around really nicely. As always with us we left some goals out there but the ones we did score were all nicely taken.

“The shadowy fixture figure overlords have deemed it that we don’t have a game for a few weeks, so we’ll keep fit and prepare for the remaining three games when we do get them.”

FAIRLOP FC 2 CATFORD & BROMLEY MACCABI 0
Fairlop moved up into fourth – leapfrogging the Cats in the process.

Daniel Garfinkle and James Jaconelli both on target for the victors.

Player-manager Aaron Dias told jewishnews.co.uk: “I’m sure Jeff will agree with me when I say the scoreline flattered Catford. We knew it was going to be a tough game after the draw earlier in the season and the last minute change of pitch to a muddy bobbly pitch was never going to suit the Jewish Barcelona. But we started fast and went 1-0 up in 10 minutes, the lads must have had a late night though as they went to sleep for the last 20 minutes of the first half.

“But we came again in the second half and after wasting a number of good chances, finally got the second which killed off any chance of a late surge for Catford.

“Overall, really happy with our performance, I think today showed how far the team has matured since our incorporation, and at no stage did the boys panic.

“The club have rewarded the boys recent form with a winter break to Barcelona so no game next week, then onto the big one the dons away, lets just hope they remember the goalposts.”

REAL HENDON 3 STRAW HAT PIRATES 0
Hendon are into the top half of the table thanks to this win over The Pirates.

Jordan Alex, Gav Noe and Lolu Hibbert were all on target, with manager Rafi Addlestone telling jewishnews.co.uk: “A fine performance from the Yellow and Blacks, with strong performances all over the park.

“Wunderkid Joe Metliss controlled the game from the middle of the park, while Raffy Zysblat made three outstanding saves at crucial times to keep a clean sheet.

“Defensive rock Yossi Goldberg and midfield maestro Motty Korman rolled back the years to teach the young opposition a lesson. And finally, left-back and player of the season contender Gali Kolt had a typically solid and committed defensive performance, combined with a continued threat on the overlap and even an ‘amazing assist’ for the crucial second goal with a 60 yard throw in.”

TEMPLE FORTUNE B 1 FAITHFOLD B 2
The battle of the bottom two saw The Greens win just their second league game of the season as they join Fortune on seven points.