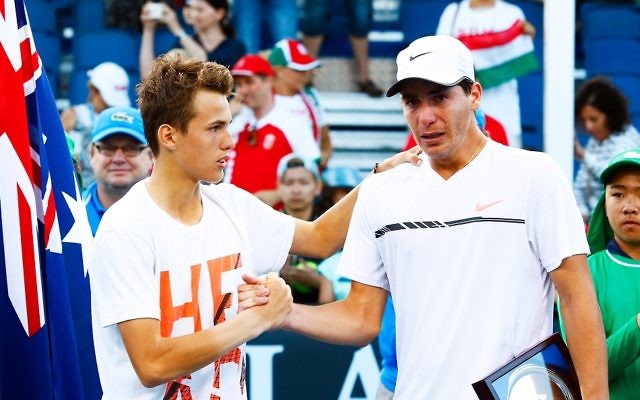 The 17-year-old won the first set against his Hungarian opponent, Zsombor Piros, though saw the 16-year-old show great mental strength and resilience to turn the match around in his favour.

The first meeting between the two, Piros claimed the opening break in just the second game of the first set, but Oliel hit back immediately, before breaking it again to claim the set 6-4.

Hungarian 16-year-old Zsombor Piros has captured his maiden junior Grand Slam title, fighting from a set down to defeat Israeli Yshai Oliel 4-6 6-4 6-3 in the Australian Open 2017 boys’ final on Saturday.

Lightning struck twice at the start of the second set, with Oliel broken early again, and with each then holding their serve, the Hungarian, found himself serving for the set. Oliel broke back to get it to 5-4, but Piros broke back immediately to claim the second set 6-4 and level the match at 1-1.

While the momentum lied with Piros, Oliel had a great chance to stamp his authority on the third set when he found himself with three break points in the first game, though unable to take any of them, he was then broken in the sixth game, after which Piros never looked back as he clinched the deciding set 6-3.

A visibly distraught was unable to speak during the medal ceremony, though did say afterwards: “I’m very disappointed with today’s result. I felt like I could win. But I’m happy with my tournament and with my recent progress. I’m certain that if I continue this way I will reach these stages again and hopefully win.”

Israel Tennis Association CEO Shlomo Glickstein said: “This was an amazing tournament and a superb achievement for Oliel, it will help his ranking, his level of play, his confidence and his belief in his own abilities.”

Piros graciously admitted the better person had lost. He said: “I don’t play good shots. I think today he was better. I will be honest. He was the attacker like most the time. I was the defender a few times. [As the game went on], I think he just realised that I’m closer to the win, and that’s why he just thinking about that. I think he was nervous.”