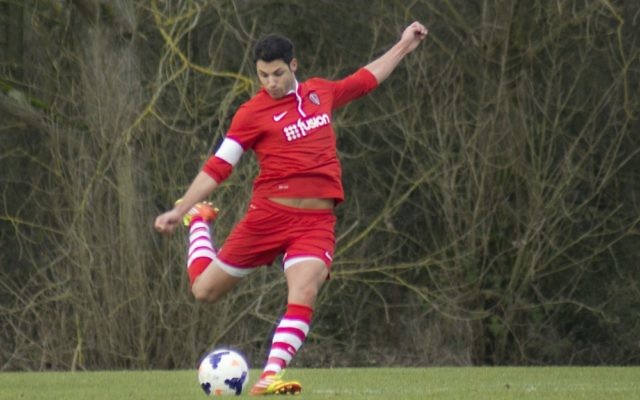 James Gershfield has set his sights on becoming London Lions’ all-time leading goalscorer after he broke the record for most goals scored in a season, netting his 42nd strike of the campaign at the weekend.

His strike in their 5-0 Herts Centenary Trophy semi-final win over Bishops Stortford saw him better Max Kyte’s 41 goals, which he achieved in the 2015/16 season, as the side kept alive their bid for a league and cup treble.

Delighted with feat, he told Jewish News: “I’m over the moon. It’s up there with one of my best personal achievements in my career if not the best. I was aware of the record set by Max at the start of the season and my aim from the very start was to beat it. I didn’t think about it too much in the opening games, but as the goals went in and I got nearer to the 41 mark, it starting playing on my mind before each game. I’m proud to have reached it and now my aim is to set the bar for the next challenger.”

Hoping to break more records and eyeing up being the club’s top ever goalscorer – which stands at Adam Stolerman’s 134 goals, he said: “I’ve now scored 102 goals and Adam’s tally is the next target, I don’t think I’ll beat that record this season, but maybe next!”

Saying how he couldn’t have enjoyed his goalscoring exploits without his teammates, he said: “It’s all down to the team and I can honestly say I wouldn’t have achieved this without them. The service that I get from them is amazing, week in, week out they provide me with chances, we have quality all over pitch and it’s exciting to be part of this team.
The win over Stortford keeps the Rowley Lane side on track for what would be a first ever treble, and Gershfield says: “We have our eyes set on all three. We’re challenging on three fronts and each and every member of the team and coaching staff are relishing the idea of a treble.

“I’ve been involved in many teams since I started playing football, but have never played in a team with such a strong bond and a team spirit. Everyone gets on with each other and there are no groups within the team, we’re all united as one. I can honestly say I haven’t enjoyed my football this much in a long time.

“Our success so far is down to the team-spirit in the camp and although nothing has been achieved yet, I’m confident we can go on to be the most successful Lions team to date. A lot of credit must go to Andy, Steve and Darren who also give up a lot of time and effort and make sure we are armed with everything we require to succeed. From training on a Thursday to matches on a Saturday and mid-week, everything is spot on.”