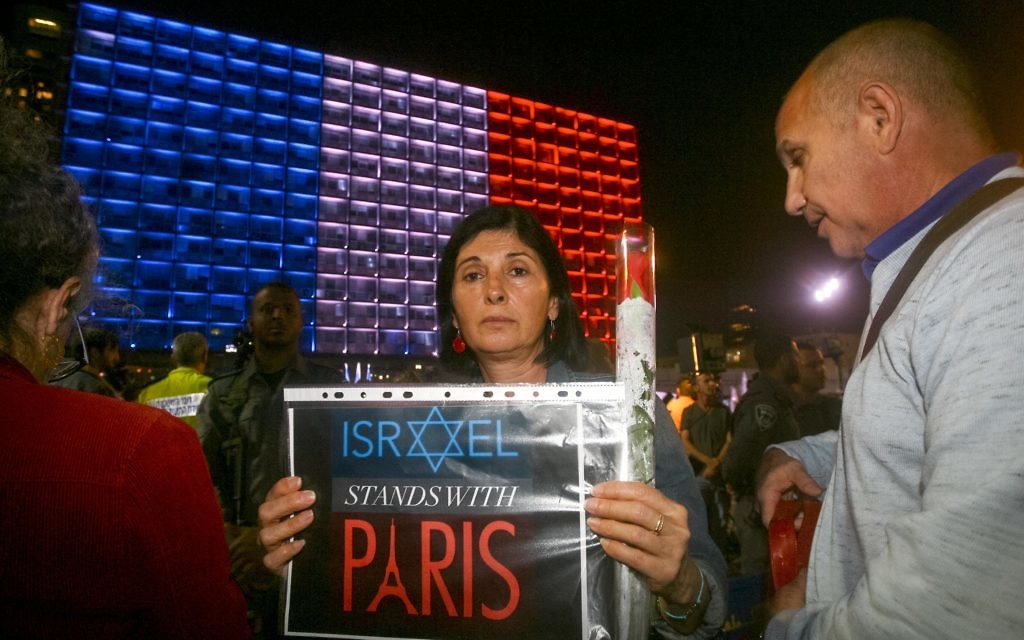 France’s Jewish community is united in grief with their fellow countrymen and women in the wake of last Friday’s terror attacks which left 129 people dead and hundreds more wounded.

Terrorist teams targeted different venues – the national football ground, the Stade de France, where President Francois Hollande was watching a game; a group of local neighbourhood cafes; and the once-Jewish owned concert venue, the iconic Bataclan, where more than 80 people were murdered.

The predominantly Sephardi Paris Jewish community is traditional and its young people more often spend Friday nights at home with their families, which may well have led to the few Jewish-related casualties in the carnage. One who died was Djamila Reibenberg, wife of Gregory Reibenberg, who was the majority share owner of the cafe La Belle Equipe, one of the targets for the gunmen. Another was a 22-year-old university student, Justine Moulin, shot dead at La Petit Camboge, also attacked by the terrorists. Ms Moulin was not Jewish but was the granddaughter of a well-known member of the Paris Masorti community, Professor David Ruzie.

Rabbi Jonathan Wittenberg, senior rabbi of Masorti Judaism in the UK, said: “We respond to the appalling terror attacks in Paris with deep sorrow for the families of all those murdered, and with prayers for the wounded and traumatised. Our spiritual response to terror is a profound affirmation of the value and sanctity of life as affirmed throughout Judaism, in every true expression of faith, and in the hearts of all who genuinely trust in God”.

The Bataclan, sold just two months ago by Jewish owners who had run it for 40 years, frequently hosted pro-Israel events and was well-known as a target for anti-Zionist radicals. The band that was playing on Friday night, the American group Eagles of Death Metal, played in Tel Aviv this summer in direct defiance of Pink Floyd’s Roger Waters who has called for a blanket cultural boycott of Israel. In the wake of Friday’s terror attacks the band has announced its intention to return to play in Israel as soon as possible.

Chief Rabbi Ephraim Mirvis signed a book of condolence at the French Embassy in London on Tuesday and spoke to his counterpart, the French chief rabbi Haim Korsia, after the attacks.

“We stand at one with the French people at this sad & tragic time” – CR signs the Book of Condolence @FranceintheUK pic.twitter.com/FaNffo4fdk

United Synagogue president Stephen Pack wrote to the French ambassador in the UK. He said: “The horror of the recent events in Paris has prompted an outpouring of emotion across the Jewish citizens of the UK and indeed the wider world. As a people, our history is filled with all too many memories of the suffering and anguish that such terrorism brings. In London this weekend our synagogues were filled with people whose heartfelt prayers were with the victims, their friends and families.

“Together with the people of Paris our determination is to stand firm in our unqualified rejection of the extremist terrorism that lay behind these attacks. The United Synagogue community is proud to stand together in brotherhood with all of the people of France”.

The Paris Jewish community suspended a number of planned events in light of the attacks, including a protest rally due to be held by Crif, the equivalent of the Board of Deputies, against the arrival in France of the Iranian president, Hassan Rouhani. In the event Mr Rouhani postponed his visit. Instead the community rallied to a special solidarity and memorial service at the Synagogue de la Victoria, conducted by Chief Rabbi Korsia. Chief Rabbi Korsia said: “French Jews feel with all intensity the pain of the families touched by the tragedy, and the pain of the nation in general.” But French society, he said, would “rise up from its grief like American society rose up from the tragedy of 9/11 and like Israeli society, which never lay down for attacks.”

Rabbi Moshe Levin, head of the Conference of European Rabbis and the secretary of the French chief rabbi, said: “The Jewish community of France, as all Jews around the world, is in deep shock over the massacre of citizens from all religions. Our hearts are with the bereaved families and we wish the injured a full and quick recovery from their wounds”.

Rabbi Levin added that French Interior Minister Bernard Cazeneuve had promised a significant increase in security in and around Jewish institutions throughout the country.

On Sunday, six French Jews emigrated to Israel, joined the following day by 40 more. Avi Meyer, foreign spokesman for the Jewish Agency, said dozens more were expected during the week – although almost all of these immigrants would have planned their aliyah long before last weekend’s killings. More than 6,000 French Jews have arrived in Israel since the beginning of the year, many after January’s terrorist attacks on the Charlie Hebdo magazine and the HyperCacher supermarket, where Jews were specifically targeted.

In Jerusalem, one of the most controversial right-wing rabbis, Dov Lior, said that the Paris killings were punishment for what Europe did to Jews during the Holocaust. He made his comments during the funerals of a father and son, Rabbi Yaakov Litman and his son Netanel, killed in a West Bank terror attack on Friday afternoon.