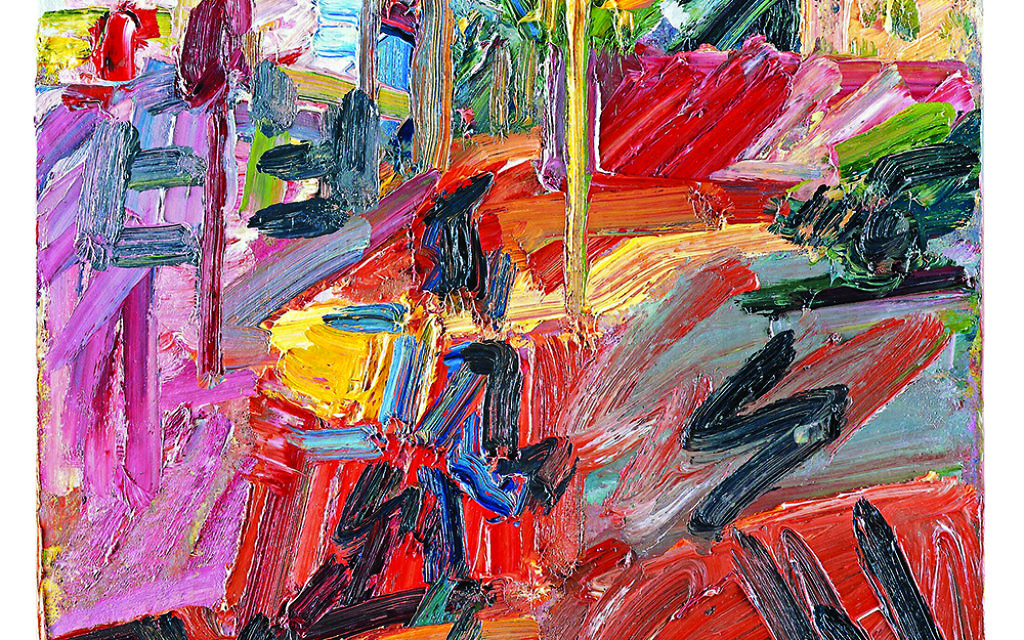 Rebecca Wallersteiner explores the Tate’s retrospective of 84-year-old Jewish artist Frank Auerbach, one of the last painters of the kitchen-sink realism school, whose powerful works have been compared to the likes of Francis Bacon and Lucian Freud

Enigmatic and reclusive, Frank Auerbach is regarded by many as England’s greatest living artist. He is one of the last painters of the kitchen sink realism school, which emerged in the late 1950s and early 1960s and whose members include Francis Bacon and Lucian Freud. Painting 365 days a year, from sun-up to sun-down in a furious race against time, Auerbach daily scrapes back the surface of his canvas until he feels satisfied with the painting.

“This part of London is my world. I’ve been wandering around these streets for so long that I’ve become attached to them and I am at least as fond of them as most people are of their pets,” Auerbach says of the area around Camden Town where he lives.

For 37 years, his close confidante Catherine Lampert has sat for him and is now the curator of Tate Britain’s major retrospective which opened earlier this month of Auerbach’s work.

I was lucky enough to meet him in the 1990s, during my years working for the artist Lucian Freud, his closest friend, who generously left his own treasured collection of paintings and drawings by Auerbach to the nation in lieu of inheritance tax – and so that we can now all enjoy them.

Auerbach is reluctant to talk to friends about his life beyond the studio. An only child, he arrived from his native Germany on the Kindertransport in 1939, aged eight ­ – and never saw his parents again. Years later, he discovered they had been killed at Auschwitz. As a young man, the artist sold his pictures from pavements, asking for just a few pounds. They now sell for millions and are collected by museums.

Despite this, he chooses to remain living in the same modest home and studio in Camden which he first moved into in 1954. It is furnished spartanly with just a few chairs, a table and a wooden desk. The floor is splattered with paint and there are canvases turned to the wall.

Auerbach has created a family of portrait-sitters, ranging from close friends like Lucian Freud and artist Leon Kossoff to actors and film-makers.

Lampert, who became a sitter and is a close friend, says: “Auerbach’s paintings, both of people and of the urban landscapes near his studio in Camden Town, are some of the most resonant, inventive and perpetually-alive works of art of the 20th and 21st centuries.”

Auerbach has been an obsessive painter for years of the few square miles of north London ranging from Mornington Crescent to Primrose Hill. Lampert has chosen to include nine of his marvellous urban landscapes in the Tate show, painted thickly in his characteristic earth colours of oranges, browns and blacks.

He can however become absorbed in his work. “He frequently shouts out loud, cursing his efforts, or recites poetry,” says Lampert, who adds that this can at times be disconcerting for his sitters.

Unlike the raffish Lucian Freud, who enjoyed champagne and fine dining with society beauties, Auerbach barely drinks and seldom socialises. Today, aged 84, he is still striking and handsome, although there is a melancholy sadness and stillness about him.

Both he and Freud fled Nazi Berlin, although Freud’s parents survived. Every day, Auerbach gets up at 5.30am and walks around Camden before most Londoners awake. At this early hour, he sketches the beloved streets around his home. Passers-by tend to leave him alone. He normally works every day of the year except Christmas Day, when he used to lunch with Freud.

“Frank is my best friend and a very nice man,” Freud once told me. Rising at dawn, the two artists would often breakfast together, and Freud went on o accumulate the biggest private collection of Auerbach’s work and used to ask his friend’s advice about paintings.

From his earliest works of the 1950s, some of which are included in the Tate retrospective, Auerbach’s intentions have been consistent.

“What I wanted to do was to record the life that seemed to me to be passionate and exciting and disappearing all the time,” explains Auerbach.

Also included are his turbulent, powerful portraits of his beloved wife Julia. The couple met as students at the Royal College and married in 1958.