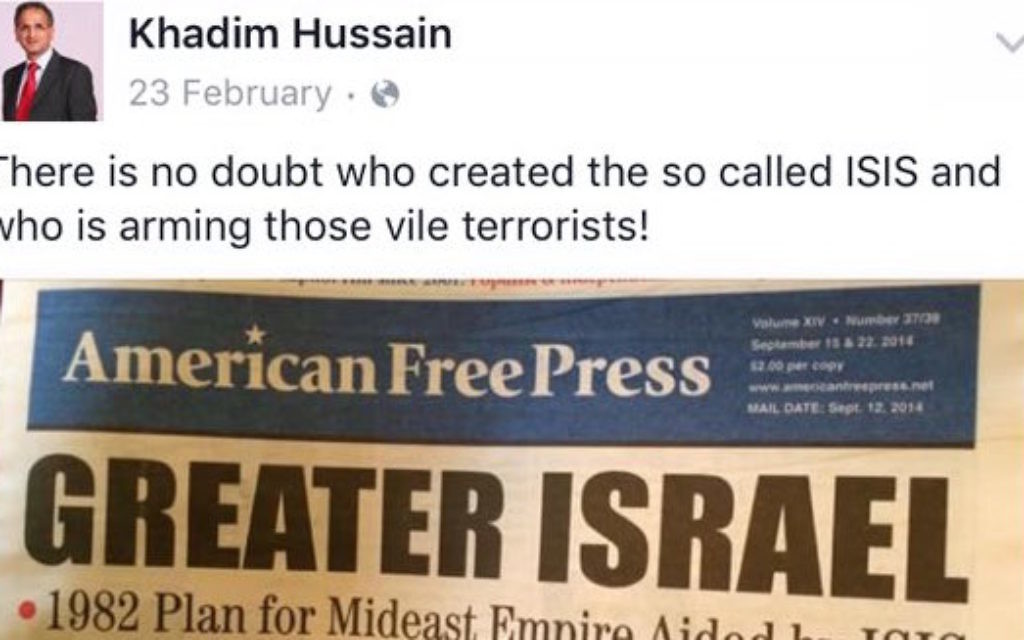 Labour has suspended suspend Khadim Hussain, who served as the Lord mayor of Bradford from 2013-4, after he became the latest Labour party member embroiled in controversy over offensive posts on social media.

The district councillor for Keighley Central, who is believed to be a candidate in May’s elections, shared one post which featured an image of the Nazi leader and decries the fact the deaths of millions of Africans are not taught in schools. “Your school education system only tells you about Anne Frank and the six million Zionists that were killed by Hitler,” it said.

Khadim Hussain shared a post which said: “Your school education system only tells you about Anne Frank and the six million Zionists that were killed”

Jewish News also discovered a link on his Facebook page to an article entitled ‘Greater Israel courtesy of Israel’.

It contains the line : “We’re told these terrorists, who incidentally sprang out of nowhere (nothing to do with Israeli, US  and UK foreign policy), just happened to stumble upon a ****load of state of the art firepower. These terrorists simply picked it up off the floor. How convenient is that..but let’s quickly drop the notion anyone was criminally negligent because the Zionist propaganda  tool known as the media could have its hands full when it comes to explaining how the entire US military is unable to stop these murderous maniacs.”

Above the post, the councillor wrote: “There is no doubyt who created the so called ISIS and who is arming those vile terrorists!”

In the past two weeks, Labour has suspended member Gerry Downing, who posted material on “the Jewish question” and Woking Labour vice-chair Vicki Kirby after the Guido Fawkes website revealed she had been readmitted despite posts suggesting Jews having “big noses” and that Hitler might be a “Zionist God”.

Jewish Labour Movement chair Jeremy Newmark said: “We call on the party to suspend Councillor Hussain following the precedent set over recent weeks, and for a swift and robust investigation.”

Marie van der Zyl, Vice President of the Board of Deputies of British Jews, said, “Bradford councillor Khadim Hussain is sharing antisemitic sentiments that are unacceptable in any part of public life and should have no place in our politics. We urge Labour to suspend him immediately, investigate promptly and take all necessary further action.”

Hussain was contacted for a response but has yet to respond.