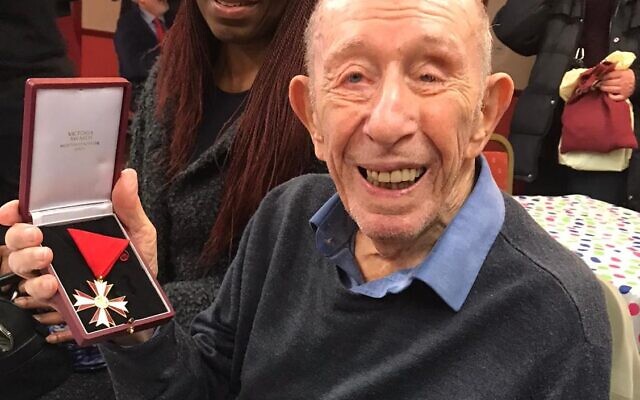 Eric Sanders, a Jewish refugee from Austria who arrived in the UK with his family after the Nazis invaded his home country, has passed away aged 101.

Sanders, who served in the British armed forces before becoming a teacher and later a screenplay writer and translator, passed away peacefully at home this week.

During World War Two Sanders served in the British Army for seven years – three in the Special Operations Executive.

He served one year as an interpreter at a German Prisoner of War camp and another in the legal division during the British Occupation of Austria.

Moving to live in London with his wife and family Sanders later received an Austrian Cross of Honour for Culture and Science.

Sanders was a long-time member of the Labour Party in Norbury and Pollard Hill – having joined over 70 years ago making him “possibly” their oldest member at his time of death, said Reed.

Eric Sanders passed away peacefully yesterday aged 101, a Jewish refugee from the Nazis who fought for Britain then became a teacher, possibly Labour’s oldest member, we are heartbroken to lose our wonderful inspirational friend pic.twitter.com/eAa0M5P5VP

The MP had previously spoke of how he found Sanders such an inspiration during a House of Commons speech.

Sanders was born in 1919, the son of Jewish parents,with his father working as a grocer.

He was forced to leave Austria during the Anschluss in 1938 and arrived in the UK with his family.

While his younger brother left for then Palestine, as the Nazis arrived in Vienna, Sanders fled to the UK.

He later wrote his autobiography “Emigration ins Leben. Wien-London und nicht mehr retour” (Emigration to Life: Vienna-London and not back) as well as a novel “Secret Operations. From Music to Morse and Beyond”.

The novel told the story of a young promising pianist and composer, Eric, whose chances of a career have been destroyed by the arrival of the Nazis.

Sanders was a regular speaker at schools and at Labour fundraisers and he also appeared at Jewish Labour Movement events as a member.

The Association of Jewish Refugees paid tribute, saying it was saddened to hear of the passing of our member, Eric Sanders, at 101 years old. Eric was born in Vienna in 1919 and came to the UK as a young man with his family after the Anschluss. It’s particularly poignant that Eric passed away just two days before the 82nd anniversary of his arrival in the UK, on 1 September 1939. Our thoughts are with his family.”