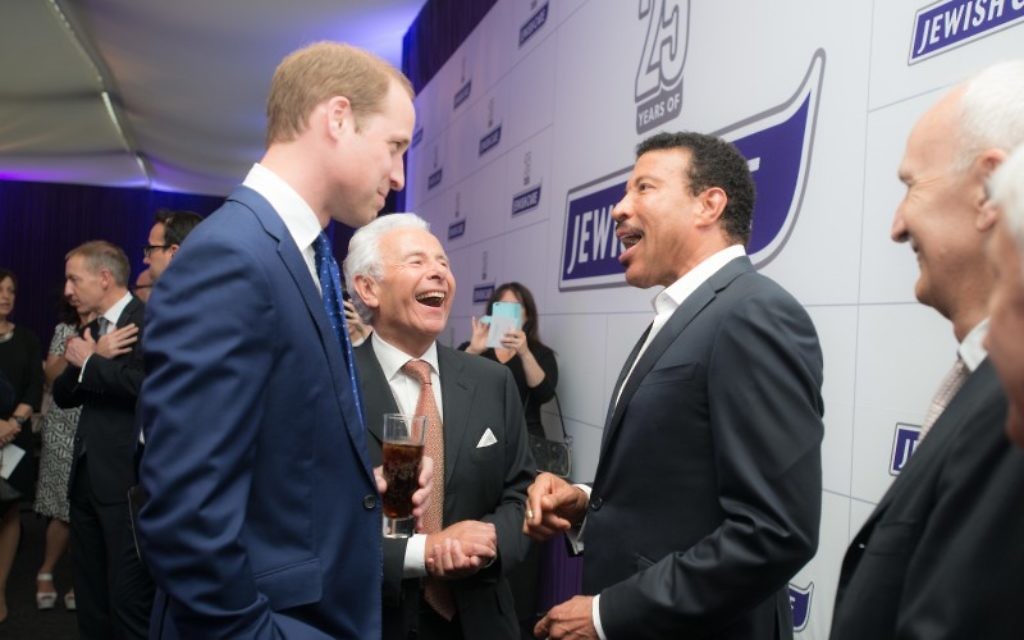 Prince William has acknowledged the anxiety felt by members of the Jewish community in recent months and hailed Anglo-Jewry’s “loyalty to one another and society” in an historic speech to Jewish Care’s 25th anniversary dinner.

The Duke of Cambridge met staff, service users and young volunteers of the charity during his first appearance at a communal event last night – his appearance helping create one of the largest ever fundraisers the community has seen seen.

Addressing the 1500 guests at Alexandra Palace, he recalled how the birth of Queen Victoria in 1819 coincided with the “remarkable birth” of what became known as the Jewish Blind Society, a precursor to Jewish Care.

“Over the next two centuries, the world changed considerably. Yet there has always been one constant in the United Kingdom – a Jewish community which has organised itself to support those who need help and support.

“This common thread through history – of caring for one another and generosity of time and money – is something that many sectors of British society can be rightly proud of. But you in this room deserve particular praise. The results of your commitment to one another within the Jewish community are obvious – the real and loving care that thousands of elderly and vulnerable people receive, among the many works that you carry out.”

In a reference to the impact of heightened anti-Semitism and terror attacks on the Continent, he added: “During a year when many in the Jewish community have had cause to feel under threat, for no reason other than simply the fact of your Jewishness, your unity is all the more precious. Your commitment and loyalty to one another, and to society more widely, is ultimately what keeps you strong.”

The second in line to the throne described Jewish Care as “a leader in the social care field” which “uses its knowledge, expertise and experience to engage in the debate on high quality care, especially in relation to dementia. Your Holocaust Survivors Centre is a second home for many people who were liberated 70 years ago from those evil places”. Expressing hope it would continue to thrive for the next 25 years, he ended by wishing the charity “a happy birthday, mazeltov”, sparking a huge standing ovation.

Lord Levy, Jewish Care’s president, had earlier introduced the Duke by saying his presence was special for the entire community. Recalling how Prince Charles had been a guest of the charity on three occasions including one with Princess Diana in 1985, he told the Duke: “You and your family are very special to our community. Every Shabbat and every big festival prayers are given and blessings said for Her Majesty and the whole Royal Family.” He also touched on the importance of the Queen’s forthcoming visit to Bergen Belsen to survivors – some of whom attended the dinner – and Jews around the world.

Holocaust survivors, young volunteers and those living in Jewish Care accommodations were among those to rub shoulders with the royal at a special reception. Among those meeting him were comedy writer Ivor Baddiel, who appeared in the night’s appeal video alongside his brother David to speak about the support given by the charity to their father who has dementia.

The Duke held hands with 101-year-old Rosetrees resident Dorothy Conway as she asked him about the latest addition to his family, Princess Charlotte, and he asked about how she had celebrated her birthday at the care home. Clearly smitten, she said meeting him was even better than she had imagined, adding he was “so handsome with lovely teeth and haircut”. Camp survivor Freddie Knoller arranged for a copy of his biography to be passed to the guest of honour as he had done years before for his grandmother, before telling the Jewish News: “He’s such a wonderful man. I’m looking forward to him being King.”

Two young volunteers at Sinclair House, Aimee Cohen and Joshua Carmel-Brown, also enjoyed a brief chat. “He asked about our volunteering and if we had exams coming up,” said Aimee, 14. “He told us he wasn’t very good at maths at school. We told him about the leadership programme and he said it was fantastic work. He was very genuine.”

Legendary singer Lionel Ritchie performed at the dinner, including a 30-minute set of his greatest hits that had guests dancing and singing along. In a moving moment, he dedicated his opening number ‘Hello’ to the Duke after recalling how Princess Diana had once told him it was his favourite song.
“It’s a pleasure to be with you all tonight but especially this gentleman,” he said.

David Cameron, Tony Blair and leaders of the UK social care sector were among those toasting the charity’s 25th anniversary in video messages. It was also announced on the night that planning permission had been granted for  major refurbishment of Princess Alexandra home in Stanmore.