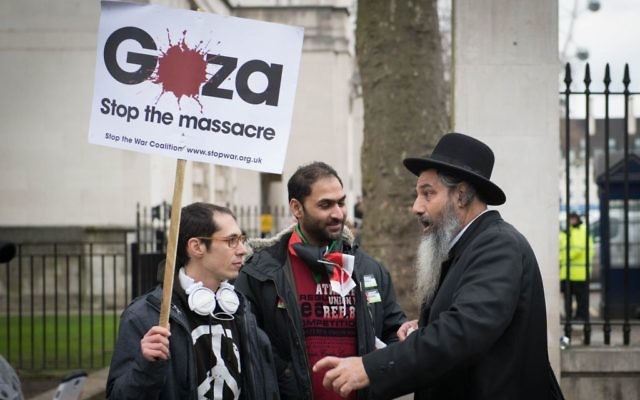 Hundreds of pro and anti-Israel people demonstrated opposite Downing Street this morning as Benjamin Netanyahu arrived for talks with Theresa May.

Carrying placards proclaiming ‘Free Palestine’ and calling for the Israeli prime minister to be taken to The Hague, the crowds protesting against Netanyahu swelled to around 300 by the time the PM’s convoy arrived. More than 150 joined the counter-demonstration, which was organised by the Zionist Federation.

At one point, the larger demo chanted ‘from the river to the sea’ – seen by israel’s supporters as a call for the Jewish state’s destruction – as the country’s supporters sang ‘Am Yisrael Chai’ – ‘the people of Israel live’.

“Regardless of politics, we are here to ensure the relationship continues to thrive and the leaders of the two countries must be able to meet,” said ZF director Arieh Miller.

“At a moment the UK needs to build strong economic relationships across the world and particularly with one in seven drugs in the NHS coming from Israel, it’s as important as ever to build those ties. With cybercrime being a growing issue and Israel leading in combating it, the UK must be able to learn from the experts in its closest ally in the Middle East.”

Others addressing the crowds included Israel Britain Alliance’s Michael McCann, Luke Akehurst of We Believe in Israel and Board of Deputies president Jonathan Arkush.

He said: “I’m very pleased such a large crowd has come in the middle of a working day to welcome Netanyahu . As I just told an Iranian media outlet this morning, he is the democratically elected leader of the UK’s most dependable ally in the middle East.” Directly addressing the Palestine Solidarity Campaign, which organised the main demo, he decried the lack of freedoms for gays and trade unions within the Palestinian Territories.

As pro-israel crowd sing 'The people of Israel live', the anti demo chants 'from the river to the sea' – meaning Israel's destruction pic.twitter.com/GkWFvcgCQN

A large police presence and barriers separated the two demonstrations and kept them well away from the gates of Downing Street.

One speaker addressing the group condemning Netanyahu insisted that Israel was not interested in international law and said the crowd demanded a British leader who would raise the issue of settlements with her Israeli counterpart – following several new announcements on construction since the inauguration of Donald Trump.

With banners calling for netanyahu to be tried at The Hague, protesters chant: How many kids have you killed today?' pic.twitter.com/2vQlepk62K

Prominent gay rights campaigner Peter Tatchell told Jewish News he joined the PSC demo because he wanted to promote a negotiated settlement with security for Israel and justice for the Palestinians.

He added: “We are very worried that the new settlements further undermine prospects for peace. We want Theresa May to tell Benjamin Netanyahu hat Britain will not conduct any new trade while while there are new and expanded settlements.”

There was no sign of any Hezbollah flags as there were when Netanyahu last visited Number 10 two years ago.

But one demonstrator carried a banner branding Netanyahu a “Nazi murderer’. She told Jewish News’ reporter to ‘f*** off’ after being asked for a comment, before offering an approving thumbs up to a group of Neturei Karta protesters as she joined the demo. 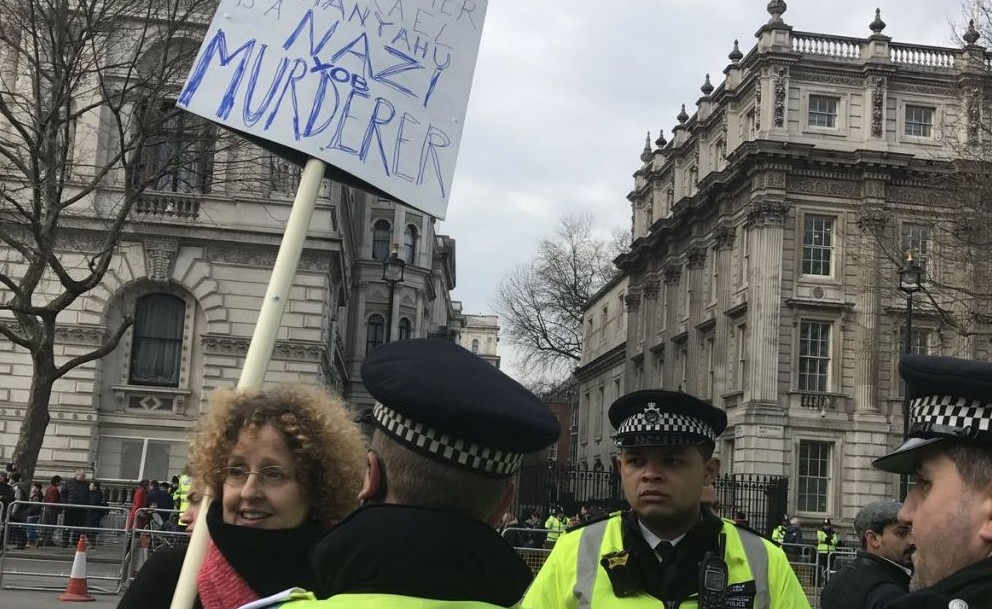 One demonstrator carries a banner branding Netanyahu a “Nazi murderer’. She told Jewish News’ reporter to ‘f*** off’ after being asked for a comment, before offering an approving thumbs up to a group of Neturei Karta protesters as she joined the demo.