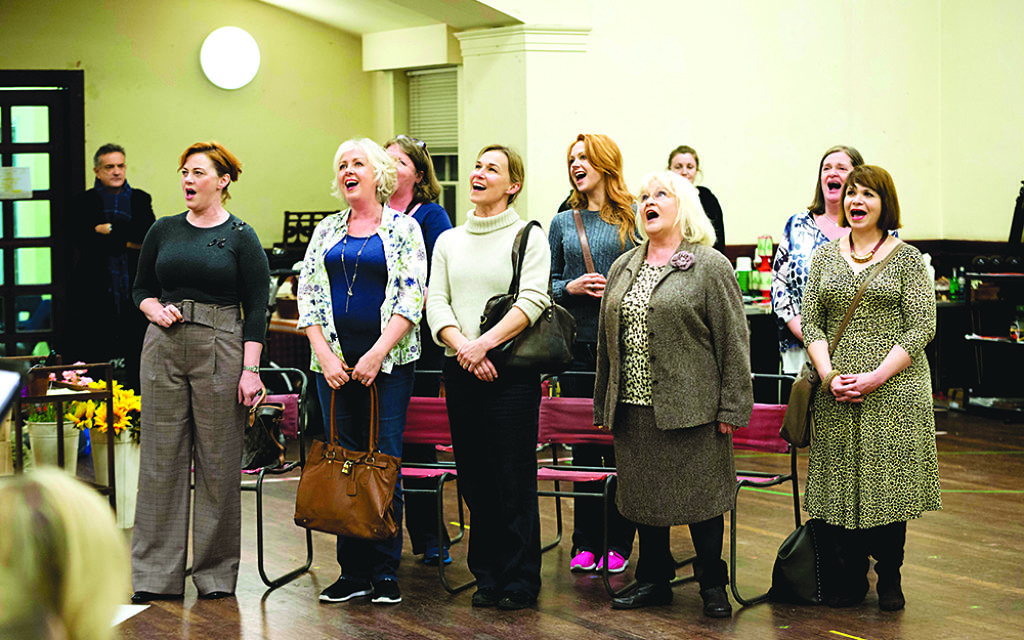 The cast in rehearsals for The Girls, a new musical incarnation based on Calendar Girls

Stripping naked on stage is enough of a daunting prospect for most, but for Debbie Chazen, the act of baring all had taken on a new poignancy.

It was her first day in rehearsals for the stage version of Calendar Girls, an emotive play based on the real-life exploits of 11 Yorkshire women, who famously appeared naked with strategically-placed props for their Women’s Institute calendar – and helped raise millions for Leukaemia Research in the process.

The play’s message was close to Chazen’s heart: both her father, Arnold, a former choir master at Wembley and New West End Synagogues, as well as cantor at Alyth Gardens, and mother, Freda, who was involved in amateur operatics, had died from cancer.

But that very day, there was another reason for the Jewish actress to feel a sense of trepidation about stripping off in her role as Ruth. For Chazen, too, had just been diagnosed with breast cancer.

The 45-year-old, who is known for her various roles in the BBC sketch show, Tittybangbang, as well as her recurring stint as consultant Fleur Fanshawe in Holby City, recalls that time as a “surreal experience”.

She says: “I found a lump on my breast. It was just so bizarre to be in a play about cancer where I had to show both boobs – one of which was about to hit the dust! The only way I could think to make sense of it all was to write about it and so I kept a diary, which was actually very healing. I thought I have to do this with a sense of humour, because otherwise I’m not going to make it.”

Eight years on and following a mastectomy, Chazen is cancer-free and reprising her role as Ruth for The Girls, the hotly-anticipated musical adaptation of Calendar Girls.

Opening this weekend for previews at Phoenix Theatre, Tim Firth, who scripted the film and award-winning play, has teamed up with Gary Barlow for this latest incarnation of the inspiring tale.

“Personally I absolutely love it as a musical,” says Chazen, who has played Ruth in the West End and on tour since 2009. “Gary’s beautiful tunes enhance the words and it ramps up the poignancy a hundred times. Although it’s very moving as a play, as a musical, every time I hear the songs I cry, because the music and words together just go straight to your soul.”

There’s no doubting the past few years have been a personal and emotional journey for the LAMDA-trained actress, who says surviving cancer has changed her outlook on life.

Chazen, who lives in London with her husband, Michael Korel, reflects: “What my parents’ early deaths have taught me is that life is even shorter than you think it is, and if you don’t get on with it, embrace it, do what you need to do in life and do it with a smile, then what’s the point? To live a life in fear is not really living, so just get on with it.

“I was 38 when I was diagnosed and at one point I was told it was terminal. To be honest, at that stage I was already an actress with some success, I’d found the love of my life, I had my own flat and my own car, I’d travelled and seen a lot of the world. I thought if I go now, I’m happy.

Her renewed lust for life means the bubbly actress has thrown herself fully into the roles that have come her way in recent years, which include everything from playing a deranged kidnapper in Doctors to sharing a scene with Benedict Cumberbatch in Sherlock and a humanoid named Foon Van Hoff in Doctor Who.

“The joy of being an actress means you can have split personality disorder with absolute joy,” laughs Chazen. “I get to be all these mad and wonderful people and it’s such fun. My favourite is probably Doctor Who, when I had a scene with the gorgeous David Tennant and Kylie Minogue and I had to hug them both!”

There is, of course, her recurring role as Ruth, loosely based on real-life calendar girl Ros Fawcett, which Chazen is looking forward to reprising – although, eight years on, she admits feeling “totally nervous” every time she approaches that infamous photoshoot scene.

“And this time I’ve got to sing naked!” she quips, but adds the role has done wonders for her body confidence.

“When I first did the play, I was 10 stone heavier and every time I had to do it felt awful and soul destroying. But when I looked out into the audience, there were women absolutely awestruck that someone like me could take my clothes off in public.

“Today I weigh less, but I’m still tubby and I’ve only got one boob. If just one person can look at me and say: ‘Well she managed to do it’, then that’s a job well done!”