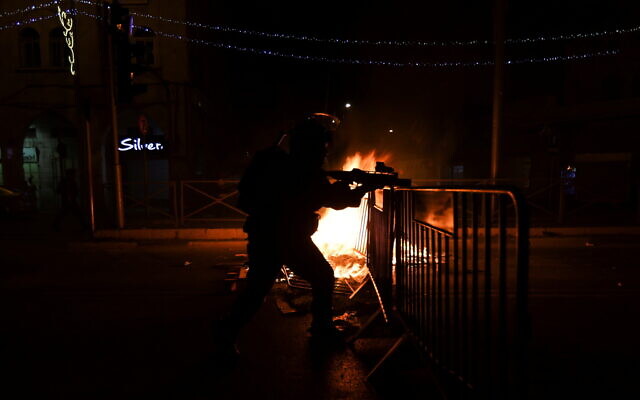 An Israeli policeman next to a burning barricade during clashes with Palestinians on Saturday night in Jerusalem's Old City, May 8, 2021. (Photo: Reuters/Ronen Zvulun)

Board of Deputies President Marie van der Zyl has said she is “deeply concerned” about the rising tide of violence in Jerusalem and has called for “all concerned to de-escalate the situation and to refrain from inflammatory actions and rhetoric.”

In a Yom Yerushalayim statement released before Hamas fired rockets aimed at Jerusalem from Gaza on Monday, the Board president said: “we are deeply concerned by the ongoing tensions in Jerusalem, the Gaza border and elsewhere.

“Our thoughts are with those who have been injured and we pray that they should have a speedy recovery.

“We call on all concerned to de-escalate the situation and to refrain from inflammatory actions and rhetoric.

“Decision-makers should act with empathy and compassion, and be guided by the simple but profound act of seeing each resident of Jerusalem as deserving of dignity.

“The Holy City should be no place for extremism or violence and should instead be a centre for peace and prayer. ”

Earlier the pro-peace organisation Yachad had circulated an open letter to the Board calling for them to “speak out now against racism and violence in Jerusalem.”

But after Hamas fired rockets after the passing of an ultimatum for Israel to withdraw security forces from both the Jerusalem compound that is home to the al-Aqsa mosque and the Old City’s Sheikh Jarrah neighbourhood, Yachad issued its own statement on the escalating situation.

“We unequivocally condemn these acts of violence,” said the pro two-state solution group.

“There’s no excuse for the indiscriminate targeting of civilians.”

The Zionist Federation accused Hamas of “hypocrisy” tweeting that the terror group “condemns Israel for its riot dispersal tactics at Temple Mount but launches rockets toward their holy city. Seems that their hatred trumps sanctity.”

The We Believe In Israel grassroots campaign group also responded on social media to the reports of the seven Hamas rockets by condemning the “indiscriminate rocket attacks fired towards Jerusalem are taking place now which could harm Palestinians as well as Israelis.”

The group added:” This violence must stop now.”

The hard-line Israel Advocacy Movement tweeted: “Hamas orchestrated the riots on the Temple Mount. Now they’re firing rockets at Jerusalem. They are determined to drag the region into war.”

Palestinian media  claimed Israel had carried out a rocket strike in Gaza in response to the rocket attacks causing casualties.