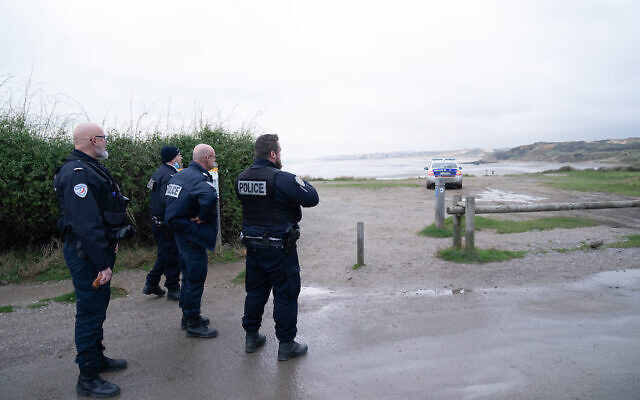 French police look out over a beach near Wimereux in France believed to be used by migrants trying to get to the UK after a boat capsized off the French coast with the loss of 31 lives on Wednesday. An emergency search was sparked when a fishing boat sounded the alarm after spotting several people in the sea off the coast of France. Authorities found 31 bodies and two survivors while one person was missing. Picture date: Thursday November 25, 2021.

The deaths of at least 27 migrants in the English Channel has been called an “unspeakable tragedy” by Chief Rabbi Ephraim Mirvis.

British Jewish campaigners responded with horror following news that a dinghy capsized off the coast of Calais, causing the loss of dozens of lives this week.

Chief Rabbi Mirvis said the disaster  was an “an unspeakable tragedy which will rightly occupy political leaders on both sides of the Channel but we must not lose sight of the human catastrophe at its heart. 27 precious souls lost. They were not the first, we must do everything we can to ensure they are the last.”

Meanwhile, World Jewish Relief, said it was “deeply saddened by the deaths”, which “could have been prevented”.

It added: “No one should feel like their only option is to risk their lives crossing the channel in a small boat. As an organisation founded to rescue Jewish refugees from Nazi-occupied Europe, World Jewish Relief knows the importance of safe routes to the U.K. for those fleeing danger.”

Lord Alf Dubs, who fled the Nazis on the kindertransport and now campaigns for refugees, said the “tragedy was foreseeable and predicted.”

The peer had spearheaded a bid for amendment to legislation allowing child refugees to be reunited with their families. He said: “More cooperation is now urgently needed with France, Belgium and other EU partners to find shared solutions. Refugee children stranded in the EU, with family here, need to be provided with safe routes to the UK as a matter of priority.

“More people making the perilous journey across the Channel have been brought ashore in the UK following the deadliest day of the current migrant crisis.”

Ahead of talks with Home Secretary Priti Patel, French interior minister Gerald Darmanin said the was an “absolute tragedy” as he blamed human trafficking gangs who promised people the “El Dorado of England” for a large fee.

This comes as new figures showed asylum claims made in the UK have risen to the highest level for nearly 20 years.

Boris Johnson called on France to agree to joint police patrols along the French Channel coast, while French politicians pointed the finger at UK authorities for failing to tackle the issue.

On Thursday, it was announced that the French authorities have arrested five suspected people traffickers in connection with the incident.