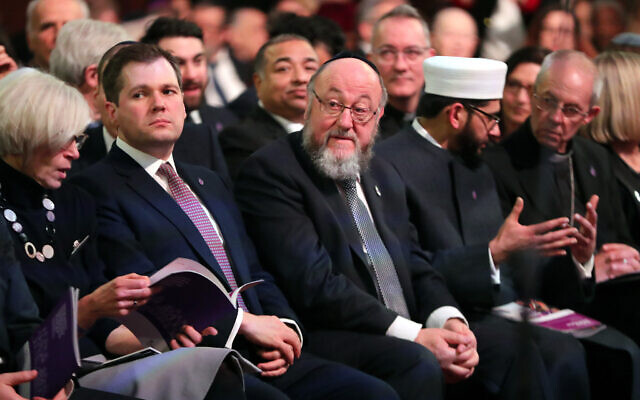 A devastating report into child abuse in religious organisations is an “urgent wake-up” call, the Chief Rabbi has said.

Yesterday’s report from the Independent Inquiry into Child Sexual Abuse (IICSA) found “shocking failures” in many religious settings to protect children, including in Jewish organisations.

Some major Jewish organisations did not even have a child protection policy, it found, while concerns were heard about potential for child abuse in unregulated yeshivas.

Chief Rabbi Ephraim Mirvis, who was praised for his “clear communication” of the “abhorrence of child protection failures”, said everyone must take greater responsibility to protect children.

“The report confirms beyond any doubt that perpetrators of abuse find it all too easy to hide in an environment where religious institutions command a great deal of respect and where a hierarchy of religious leadership is in place,” he said.

“These, together with a variety of other cultural factors, including a power imbalance and fear of reputational damage, have made our children more vulnerable to the scourge of abuse.

“This cannot be allowed to continue any longer.”

He added: “The failure to protect our children, and to report abuse where it occurs, is a complete abrogation of our responsibility to God and to one another. It cannot and must not be tolerated.”

The report recommended that all religious organisations should have a child protection policy, and that the Government should legislate to amend the definition of full-time education.

Among the shocking examples child abusers attempting to hide from justice was the case of paedophile Todros Grynhaus, a prominent member of the Manchester Charedi community.

Grynhaus was convicted to 13 years and two months in prison in 2013, with a judge finding he had “felt able to rely on a prevailing attitude of insularity” in the community to avoid being held to account for his crimes.

Some Jewish organisations, including the United Synagogue, were praised for being a “rare example” of an umbrella body which provides support for safer recruitment.

The United Synagogue’s chief executive, Steven Wilson, welcomed the report, saying the movement would support “more formal and proportionate regulation of child protection within religious organisations and would be pleased to work with the Inquiry on this important piece of work.”

Other Jewish bodies were criticised, however, including the strictly-Orthodox Union of Orthodox Hebrew Congregations (UOHC).

The inquiry said that there was “a mismatch between the organisation’s stated position and its actual practice in responding to allegations of child sexual abuse.”

The organisation’s Rabbi Jehudah Baumgarten had told the inquiry that the rabbinate was clear child sexual abuse must be reported to the relevant authorities.