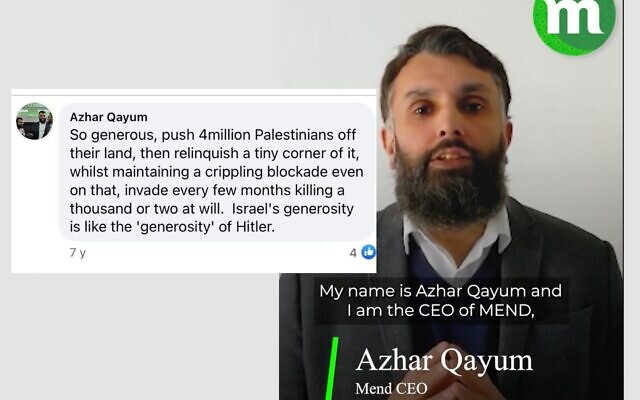 The chief executive of Islamic advocacy group Muslim Engagement and Development (MEND) wrote that “Israel’s generosity is like the ‘generosity’ of Hitler” in an incendiary social media post.

Azhar Qayum made the claim during a heated online debate sparked by the 2014 conflict between Israel and Hamas.

MEND’s chief exec also supported a suggestion by another contributer to the Facebook discussion that supporting Zionism is the equivalent of backing the Nazis, the Ku Klux Klan in America and the apartheid regime of South Africa.

Commenting on a suggestion Israel had been “generous” when it withdrew from Gaza in 2005, Qayum wrote: “So generous, push fourmillion Palestinians off their land, then relinquish a tiny corner of it, whilst maintaining a crippling blockagde even on that, invade every few months killing a thousand or two at will.

Explaining his comments, Qayum told Jewish News: “The comment you have sent is from 2014 (seven years ago) and before my time in MEND.

“I used the word as you would of any nation that had recently used its armed forces to kill thousands of unarmed civilians and NOT as an insult to any people.

“Having had a huge amount of anti-racism training in my MEND years I would now not use the word ‘Hitler’ in this context, particularly as I now know how some have made antisemetic comments when making comparisons to Nazi Germany.

“However, it was never intended in any way to be antisemitic and any insinuation that it was will be challenged. I will continue to work with all communities, including the Jewish community, to challenge all types of racism and bigotry, including antisemitism.”

“It is a moral inversion that hijacks Jewish trauma from the Holocaust and turns it into a stick to beat Israel.It is obscenely offensive and should be roundly condemned.”

Qayum had been part of a heated Facebook discussion group, which was launched by someone who claimed Israel was “trying to destroy Palestine.”

Responding to claims Israel was a democratic and secular state, he wrote:”A democracy is not only about elections. Hitler was elected. As to secular, when you term yourself a Jewish state that goes out of the window.” 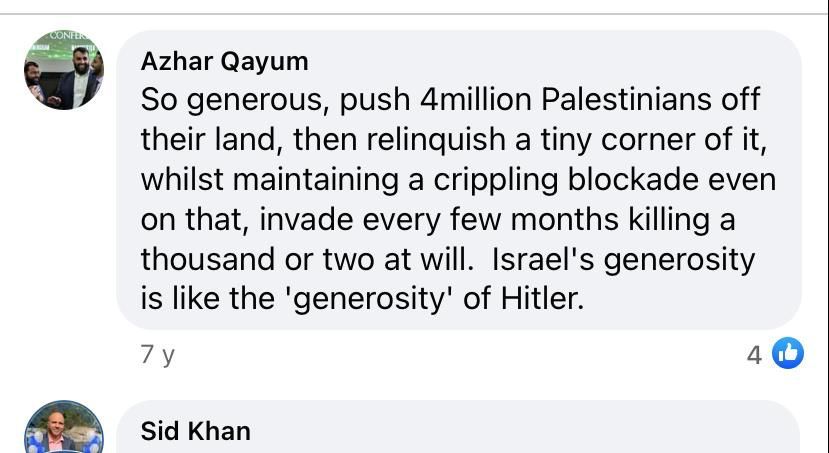 Qayum claimed the Middle East had two “secular democracies” in Turkey and Tunisia – and that “Israel doesn’t come close.”

Later in the debate he responded to the suggestion that “given the chance Hamas would wipe Israel off the face of the earth.”

Qayum wrote:”What’s fact is that Israel has already wiped Palestine off the fave if (sic)  the earth.”

He also later reposted a comment from another person in the discussion which was directed at a pro-Israeli commentator.

The comment reposted by Qayum said of the pro-Israel contributer:”If you were in South Africa you’d be a racist, in America you’d probably join the KKK, and if you were in Germany you would probably be a Nazi.”

MEND has regularly been at the centre of controversy since it was founded by Sufyan Ismail.

It was set up as an NGO that aims to encourage British Muslim communities to be more involved in British media and politics.

Ismail has previously caused upset when he claimed, after MPs voted to recognise Palestine, that it was “the first vote lost by the Israeli lobby in parliament for 300 years.”

Ismail stood down as MEND’s chief executive in 2016, where he was then replaced by Qayum.

As chief executive of the organisation, Qayum was at the forefront of recent cricism of Professor Swaran Singh’s report into anti-Muslim sentiment in the Tory Party.

Qayum has also been heavily involved with events put on by the Stand Up To Racism group, who are closley linked to the Socialist Workers Party.

He has also called for social media companies to be more effective in tackling online racism.

Responding to newspaper reports about England and Man City star Raheem Stirling, Qayum tweeted on July 4: “Why are our papers so dam racist. They do it so effortlessly.”