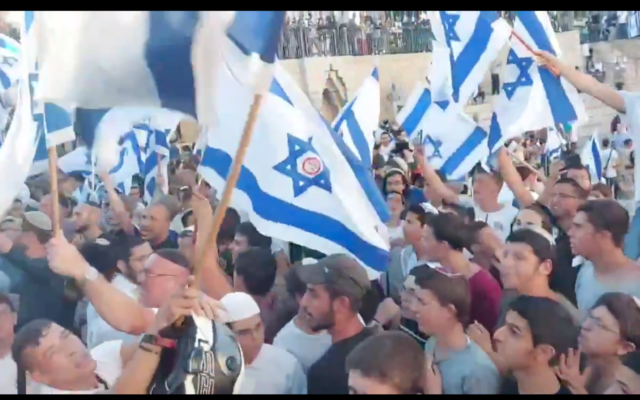 Screenshot from video where racist chanting was heard

Weeks of calm in Jerusalem and Gaza shattered spectacularly on Tuesday after a Jewish ultra-nationalist marched through Jerusalem led to chants of ‘Death to Arabs’.

British Jewish leaders branded the chants ‘racist’ , saying they were the “antithesis of the values of Judaism and Zionism.”

Shortly after, incendiary balloons were released into Israel from the Gaza Strip, prompting Israeli overnight airstrikes on the enclave.

The fury stemmed from a rescheduled ‘March of Flags’ by 5,000 mostly religious Jews in the Old City of Jerusalem, organised by right-wing Israeli groups, which later descended into racist chanting.

New Israeli foreign minister Yair Lapid said: “It is incomprehensible how one can hold an Israeli flag in one’s hand and shout ‘death to Arabs’ at the same time. This is not Judaism, not Israeli, and it certainly is not what our flag symbolises. These people shame the people of Israel.”

The incident was condemned by the Zionist Federation UK’s acting chair, Richard P Woolf, who said he was “disappointed to read about the racist chants made by a small minority of Israeli Jews”.

He added, “this minority’s abhorrent calls for “death to Arabs” bring shame upon all of Israel and stands as the antithesis of the values of Judaism and Zionism.” The ZF also called on Israel’s new government to “address this ongoing issue of anti-Arab racism”.

Board of Deputies President Marie van der Zyl condemned the “distressing and threatening chants against Arabs”, saying it “utterly condemns this awful racism.”

Yachad, which campaigns against Israel’s presence in the West Bank, said: the “flag parade in Jerusalem was approved with the understanding that it would result in racist extremism.” It said while Palestinians were told to close their shops, “Jews were allowed to march through the Muslim quarter while spouting racism. There are not two equal sides here”.

Calling chanters a “disgrace”, it said that “if our communal organisations want to be seen as credibly anti-racist, they have a duty to condemn” the chanting.

Meanwhile, with a heavy police response and feelings of bitterness by right-wing supporters of the ousted Benjamin Netanyahu, there were fears of a renewal of intercommunal violence between Jews and Arabs, as was seen last month in cities like Lod.

The march, which is usually held on Jerusalem Day, was cancelled this year, as Israel fought a bitter battle with Hamas. It celebrates Israel’s capture of the holy city in 1967 and winds its way in part through Muslim-majority areas, which many consider to be a provocation.

In response to the incendiary balloons sent over the border, which destroyed crops in around 26 fields, the Israeli Air Force attacked what it said were Hamas military installations in Khan Yunis and Gaza City. Urged by Egypt to avoid retaliation, Hamas did not respond with rockets.