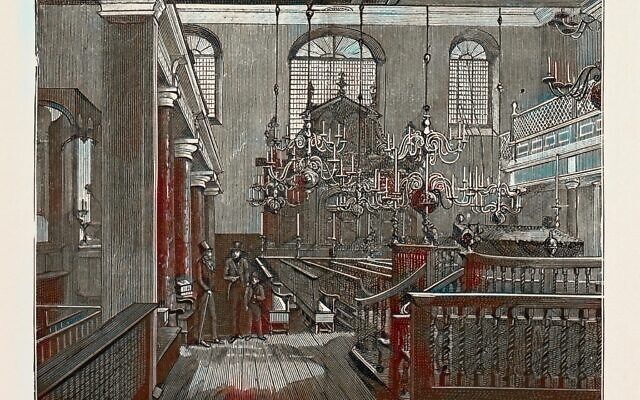 A 48-storey tower which the UK’s oldest synagogue feared could spell the end of its services has been rejected, after more than a thousand objections.

Bevis Marks, a historic synagogue in the City of London, had raised the alarm that a 48-floor office block at 31 Bury Street was one of two developments which would leave the building overshadowed in darkness.

The synagogue is lit by up to 240 candles, and its lighting is constrained because it is a Grade 1-listed building.

Councillors at the City of London today refused to approve the towering development, after objections being raised across the community, including the Chief Rabbi and historian Sir Simon Schama.

The meeting heard objections from Sarah Sackman, and the synagogue’s Rabbi Shalom Morris, who raised concerns the tower would block out sunlight and make worship difficult.

“Bevis Marks is where I got married. I speak alongside thousands of British Jews who are concerned about this application,” said Ms Sackman, a planning lawyer speaking in a personal capacity.

“The true extent of the harm to Bevis Marks is being missed. Considered both individually and cumulatively, the impact of this scheme is the straw that breaks the camel’s back.”

Rabbi Morris said: “The only reason I’m speaking to you today is because the Jewish community believes the very future of Bevis Marks, our cathedral synagogue, is at risk if you approve this scheme.

“That’s not hyperbole, or theatrics. Our actual lived experience of the place informs our keen awareness that placing a 48-storey tower to our southern exposure will cause us harm.

He added: “It will diminish the spiritually uplifting and practically necessary light that filters into the synagogue … There’s so many ways Bevis Marks will be harmed by this scheme that I’m shocked we’re even having this meeting, but here we are.”

Speaking on the equalities impact, the City was criticised by a third objector, Robin Makin, who noted that an invitation to speak at the committee was emailed out on Shabbat, with a response required on a Jewish festival.

Councillors ruled fourteen votes to seven that the development shouldn’t go ahead, despite its planning officers recommending approval.

Its planning officer Gwyn Richards said that the City had consulted five experts who concluded that the change to lighting levels would be minimal.

“It’s considered that these are very small reductions, which would be minimally noticeable to the users of the synagogue,” he said.

“Officers consider that such a small reduction in light would not impact the ability to read or appreciate internal features of religious significance and therefore we conclude will not harm the building’s religious use.”

Mr Richards also claimed that “rigorous conditions” would have been applied to ensure the demolition of the Bury St office block does not affect the synagogue’s foundations.

Speaking for the applicant, Alexander Morris, said the developer had met with the synagogue more than any other consultee to try and assuage concerns.

A final decision will be made by the City of London’s assistant town clerk, after receiving the recommendation of the committee. A second 21-storey tower in nearby Creechurch Lane has still yet to be decided.