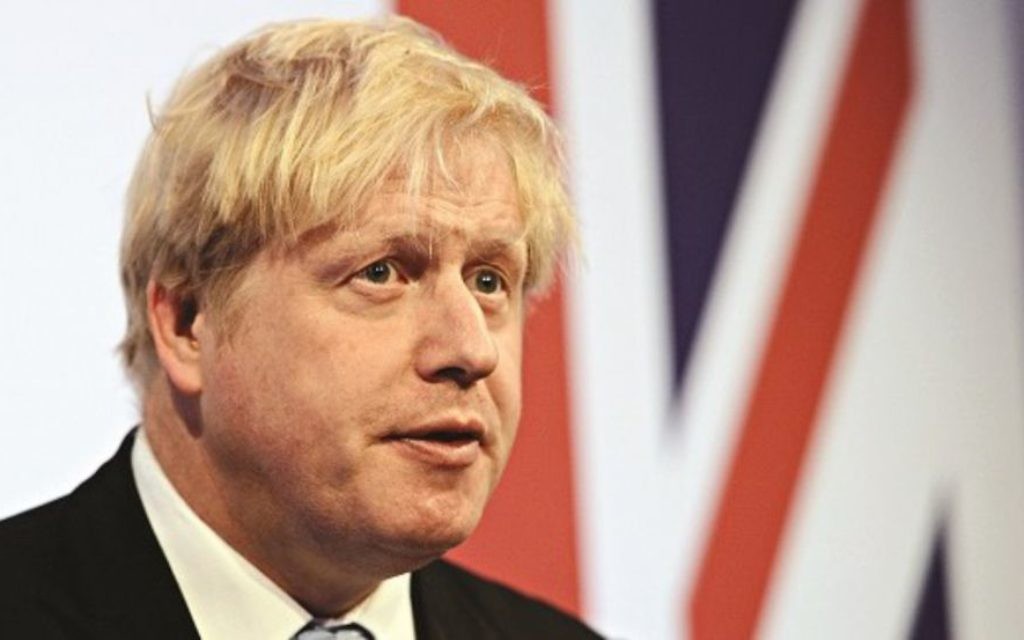 Boris Johnson has told Iran to “cease this madness” over its breaching of the nuclear deal and said he was “prepared” to re-start sanctions against Tehran.

The former foreign secretary’s comments came in the only Jewish media interview of his campaign to become prime minister, during which he vowed to maintain the proscription of terror groups on EU banned lists after Brexit and to pursue Palestinian leaders over their policy of paying salaries to terrorists.

He also responded to concern over his labelling of Israel’s actions in the 2014 Gaza conflict as “disproportionate” and said “wild horses wouldn’t keep me away” from becoming the latest PM to visit the Jewish state.

On Iran, Johnson insisted the nuclear deal which the UK remains a signatory to has stopped Tehran from building a nuclear weapon – but said Britain must now wait for a the international watchdog to confirm Iran’s claims that it has already broken its terms before considering sanctions. “I don’t want people to think I’m in any way soft on Iran. We face a very difficult situation and I am certainly prepared to go down that route if they have breached the nuclear deal. My strong, strong advice to the Iranians would be to cease this madness, not to take any further steps that would break the terms of the agreement, and not to acquire a nuclear weapon.

“I think that there are enough tensions in that region without triggering a nuclear arms race, whose consequences would be very hard to foresee, and which would certainly pose very difficult choices for any Israeli government. I certainly think you could not fault the UK government for being tough on Iran’s sanction busting. As Prime Minister, I’d make sure we continue to do everything we can to constrain Iran’s disruptive behaviour in the region.” 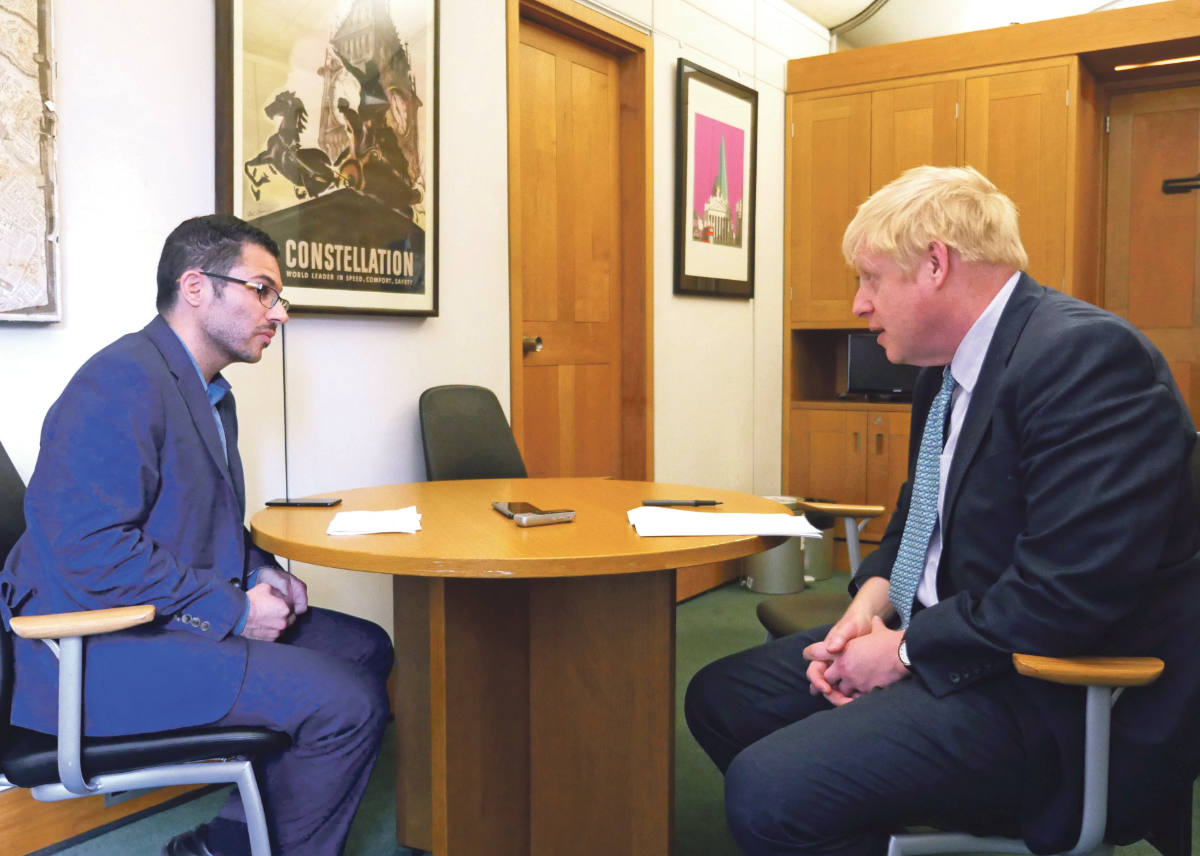 The Uxbridge and South Ruislip MP described himself as a “passionate Zionist” and Israel as “great country” that “I love”. It was in this context that he sought to explain his characterisation of the IDF’s operation against Hamas in 2014 as “disproportionate” – a claim that differentiated the London mayor’s response from that of David Cameron’s government.

“Those of us who support Israel always want Israel to show the greatest possible restraint in all its actions and to do everything it can to minimise civilian casualties. It’s totally unacceptable that innocent Israeli civilians should face the threat of rocket fire and bombardment from Gaza. I understand why Israel reacted in the way that it did and I understand the provocation and the outrageous behaviour that occasioned that response. All I’m saying is that you know in any such response it’s always right to be proportionate. 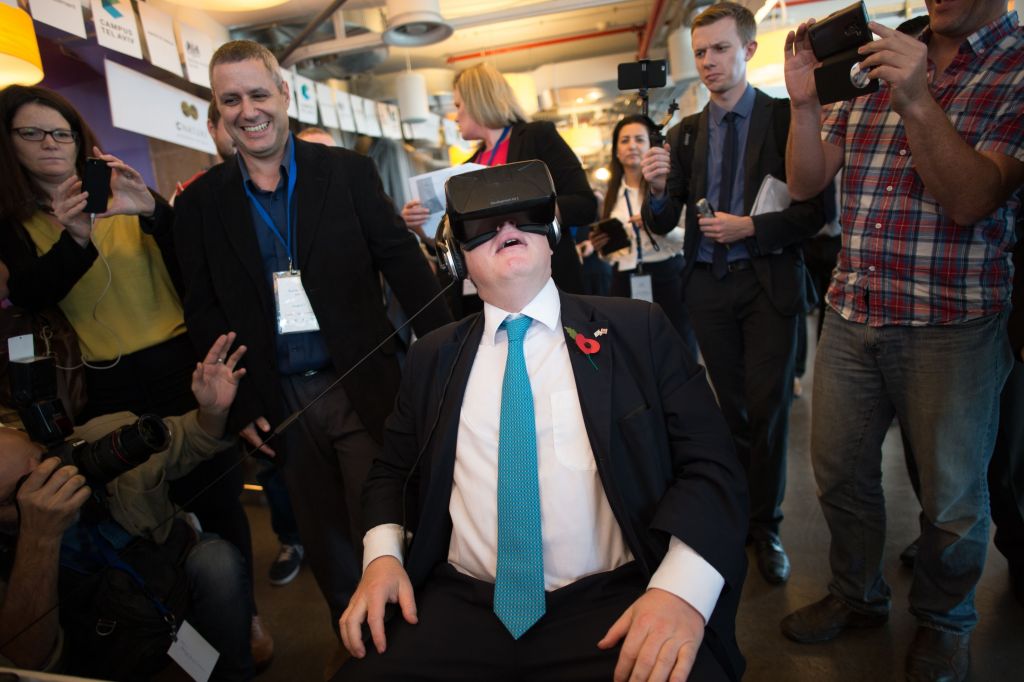 Ex-Mayor of London Boris Johnson tries on an Oculus virtual reality headset at Google’s offices in Tel Aviv, Israel, at the start of a four day trade visit to the region in 2015.

As London mayor, he led a successful trade mission to Israel and the West Bank, but the final day made headlines for the wrong reasons after a series of engagements were cancelled amid Palestinian anger at his colourful dismissal of Israel boycotters.

“I was proud to be the Mayor who led the first ever London-Israel trade mission. I’m proud that the UK is now Israel’s biggest trading partner in Europe and we saw huge investments both ways, partly actually as a result of that trip. We did a lot of good business but we want to step it up. There’s much much more to be done and I will be actively supporting trade and commercial engagements of all kinds.”

“I don’t want people to think I’m in any way soft on Iran. We face a very difficult situation and I am certainly prepared to go down that route if they have breached the nuclear deal.

Asked if he agreed with leadership rival Jeremy Hunt’s description of boycotts as “antisemitic”, he said: “I think it often stems from that syndrome, definitely. Anybody who knows anything about it knows that actually the boycott and disinvestment movement will probably hit hardest Palestinian community people who are in jobs, are benefitting from Israeli investment, Israeli farming, whatever. It just makes no sense at all.”

Johnson said he “could see the logic” in moving the British Embassy to Jerusalem but believed “the moment for us to play that card is when we make further progress”. And he added the moment for this country to formally recognise Palestine would be when Palestinian leaders “meaningfully recognises Israel and stops threatening to revoke recognition”. 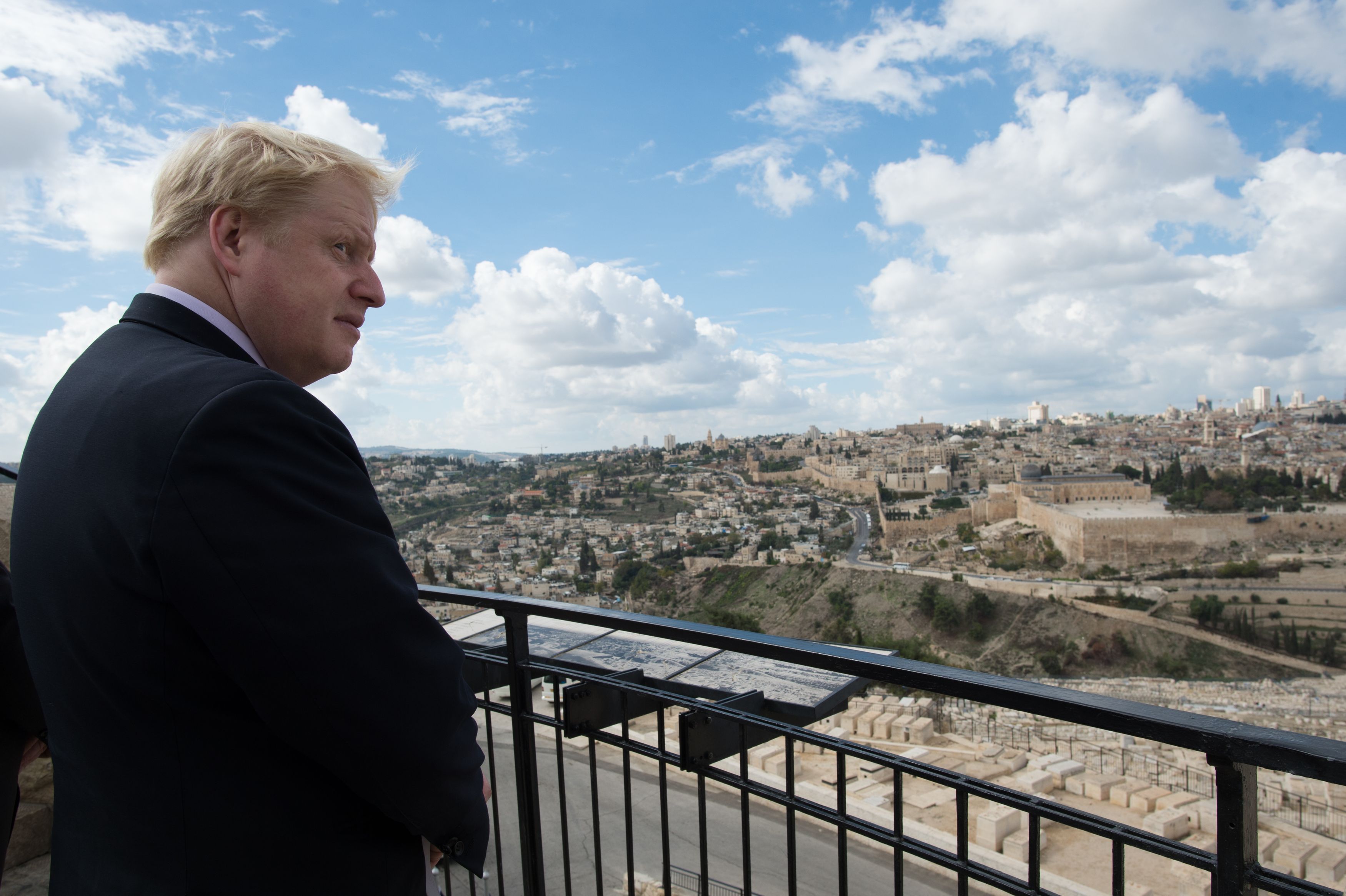 Boris Johnson looks out over the Old City of Jerusalem from the Mount of Olives during his trade visit to Israel (2015).
Photo credit: Stefan Rousseau/PA Wire

He also strongly condemned the Palestinian policy of offering salaries to terrorists. “There are funds that are made available to the Palestinian Authority that end up in the pockets of terrorist families, and that is indeed a point I raised with Mahmoud Abbas, and will continue to raise,” he said. “I think it’s ludicrous that there should be any kind of financial incentive or compensation for terrorist activities.” In 2016, the government froze millions of pounds to the PA amid claims aid supposedly paying for civil servants in Gaza was being transferred to the Palestinian Liberation Organization, which offers payment to terrorists serving sentences in Israeli jails.

Closer to home, the leadership frontrunner confirmed for the first time that “all the necessary steps” will be taken to ensure terror groups like the political wing of Hamas, the Popular Front for the Liberation of Palestine and the al-Aqsa Martyrs’ Brigade remain proscribed in Britain post-Brexit.

There are funds that are made available to the Palestinian Authority that end up in the pockets of terrorist families, and that is indeed a point I raised with Mahmoud Abbas, and will continue to raise

They are currently proscribed in member states as a result of being on EU banned lists, with the Board of Deputies and Jewish Leadership Council warning the Treasury would need to act to prevent a lifting of sanctions when the UK leaves the EU. The former London mayor committed to “copy over the list of organisations that are currently on EU-only lists”.

If he wins the keys to Number 10, government spending on security for communal buildings would “absolutely” remain at at least the same levels as today and he will “continue to support” the planned Holocaust memorial and learning centre in Westminster. He added: “I will make sure that shechita is protected and traditional observance is permitted. Of course, it is very important also that this country maintains high standards of hygiene and animal welfare.”

Boris Johnson hands out sweets to youngsters at Chanukah In The Square.

He sought to reassure British Jews concerned about the possibility of a Jeremy Corbyn government of his experience of defeating the Labour leader’s left-wing ally Ken Livingstone to City Hall. But he said the best way of avoiding that scenario was to leave the EU in October and insisted he had the “credibility to explain the Brexit deal that I do to the country. It will be a very good deal but if necessary we’ll have to come out without a deal. I also have a lot of experience of defeating the London Labour left.”

But he didn’t go as far as Matt Hancock’s description of Corbyn as an anti-Semite. “I can’t make a window into his soul, and discover exactly where his feelings lie on this. I think there is no question that he is indulging and condoning antisemitism in the Labour Party that is quite extraordinary and reprehensible. It would never have been tolerated 20 years ago.”

I think there is no question that he is indulging and condoning antisemitism in the Labour Party that is quite extraordinary and reprehensible. It would never have been tolerated 20 years ago.

Johnson was pressed repeatedly on whether he felt he shouldn’t have used the words he did by comparing veiled Muslim women to letterboxes and bank robbers – for which he apologised for the offense caused.  But he would say only: “It was a thoroughly liberal article defending the right of women to wear the burka.”

And would he be more careful in future with his language about minorities? “I remain frank and unexpurgated in my language. But I am always sensitive in the concerns of the Jewish community and other monitory groups and will continue to be true to that.”