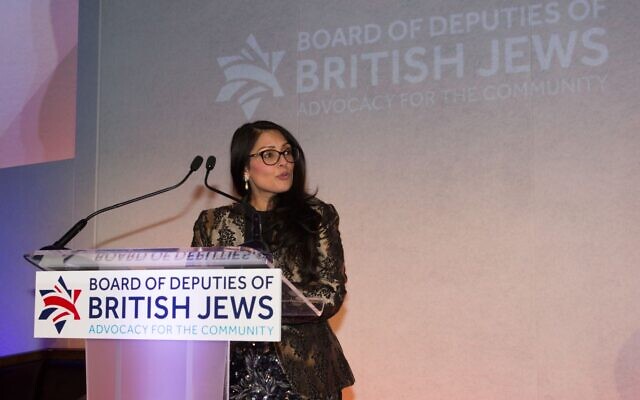 The Board of Deputies of British Jews, the Jewish Council for Racial Equality, Rene Cassin and World Jewish Relief have released a joint statement raising concerns over the Government’s Nationality and Borders Bill.

Home Secretary Priti Patel had delivered the opening speech for the second reading of the Bill in the House of Commons last month.
It has been hailed as the cornerstone of the Conservative’s new plans for immigration – aiming to deliver the most comprehensive reform in decades to the asylum system.
The intervention by the British Jewish organisations stated that they also “share a common desire that the UK must protect and support those in need of asylum.”It added: “Many people in the Jewish community originally came to the UK as frightened and vulnerable refugees – some on the Kindertransport – and were welcomed into this country.”
The communal group’s then referenced the Torah and the command: “When a stranger resides with you in your land, you shall not do them wrong. The stranger who resides with you shall be to you as one of your citizens; you shall love them as yourself, for you were strangers in the land of Egypt”Confirming they shared the Government’s desire to reform the asylum system, the joint statement said the Bill “seeks to assess those seeking asylum differently based on their means of arriving in the UK rather than on what they have fled from, and their respective protection needs.”
The Jewish group’s added:” The assumption that by restricting the rights and entitlement of those seeking asylum here will reduce the scale of people smuggling is not clear.
“In reality, this attempt at deterrence will not protect those fleeing persecution, oppression or tyranny.
“It will do little to prevent dangerous Channel crossings nor undermine the efforts of people smugglers.
“We have concerns about the proposals to limit access to family reunion for many people granted refugee status, because of how they arrived in the UK.”These proposals are likely to reduce the number of families being reunited and increase the risk of families taking dangerous journeys to be with their loved ones.”
The organisations also said it was a “missed opportunity that the Bill does not set targets or seek to expand on the number of those being resettled.”
They also said they “are worried by the suggestion to expand the UK’s indefinite immigration detention system into offshore facilities, and we encourage the Government to consider the proven community-based alternatives to detention.”
Last week the Board received widespread criticism after the Jewish Council for Racial Equality (JCORE) failed to receive the necessary two-thirds majority amongst Deputies to be admitted onto the communal organisation.