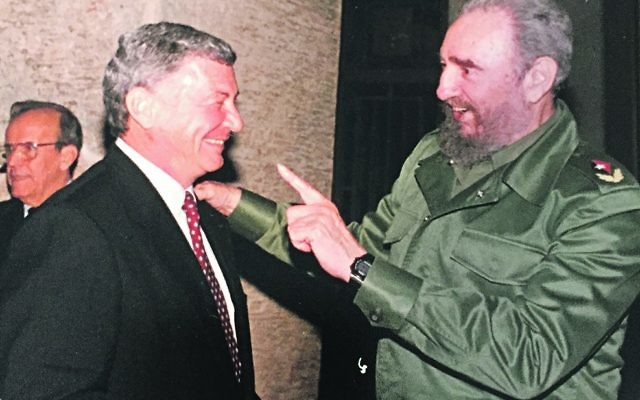 The American Jewish leader once jokingly described as a “dictator” by Fidel Castro this week spoke warmly of the late Cuban revolutionary and Communist firebrand, saying he was a “supporter of the Jewish community”.

Speaking to Jewish News, Jack Rosen, chairman of the American Jewish Congress (AJC), told of his many private meetings with Castro, who died last month, aged 90.

“When we first met, he was a hardened leader, a gun on his desk,” said Rosen. “He espoused a very tough anti-American line, but this softened over time. I saw him reach out.”

Over more than 20 private meetings across two decades, mainly lunches and dinners lasting up to six hours, the pair would talk about politics and world affairs, with Castro holding court, but also asking Rosen about Jews, Judaism and Israel.

“He was curious and interested. Once, he asked me if Jews believed in the after-life. He wanted to learn,” said Rosen, recalling how he first explained to Castro why he needed to bring kosher for Passover wine and food to the embargoed island’s Jewish community, even offering the late leader a bottle or two to try.

The two were “able to speak frankly,” he said, an understanding that was tested when Castro’s Cuba strongly supported the Palestinians, most famously at the United Nations, sponsoring a motion equating Zionism with racism.

However Rosen said he “never heard [Castro] criticise Israel in private, and he didn’t rush to defend [the motion]”.

He added that Castro was not evidently hostile to Israelis, either, and was in dialogue with “an extremely high-ranking Israeli” who had business interests in Cuba.

“I would often see Israelis in Cuba when I visited, when there weren’t many other foreigners,” he said. “They were welcome, and knew they were welcome.”

Equally, Rosen said Castro gave Cuba’s Jews the freedom to practice their religion, and supported the renovation of Havana’s synagogue, when it had pigeons flying in and out.

“So he certainly wasn’t oppressive towards Cuba’s Jewish community. I wouldn’t go so far as to say he was a ‘friend’, but he was a supporter.”

The AJC chief looks back on his time with Castro fondly, acknowledging that every so-called “dictator” has a human side, but at the end of one memorable evening with the great raconteur, it was Rosen who was labelled a “dictator” – by the man the CIA could not kill.

“As we prepared to leave around 3am, Castro approached one of us and asked why we hadn’t asked him anything,” recalls Rosen’s compatriot Eric Gertler. “A startled guest responded nervously: ‘I was told Jack Rosen would ask all the questions.’ Castro replied, ‘Ah, yes, I understand. That Mr Rosen, he is such a dictator!’”