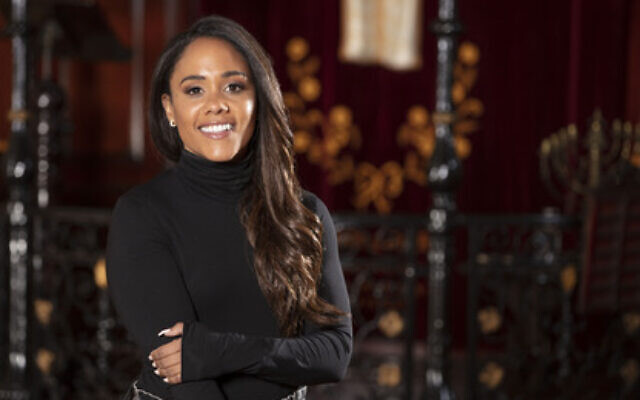 Football pundit and former footballer Alex Scott, pictured at Sandys Row Synagogue - the oldest Ashkenazi synagogue in London - discovers her Jewish roots in the new series of Who Do You Think You Are?

Football pundit and former player Alex Scott discovers she has Jewish roots in the new series of Who Do You Think You Are?

The seven-episode series, which airs on BBC One next month, features the 36-year-old learning more about the Jewish ancestry on her mother’s side and hears that her great-grandfather faced down fascism in London’s East End in 1936 – the same year that the infamous Battle of Cable Street took place.

In the course of her journey, she visits Sandys Row Synagogue, the oldest Ashkenazi synagogue in London and last remaining synagogue in Spitalfields.

Scott, who mostly played as a right-back for Arsenal WFC and made 140 appearances for the England’s women’s national football team, also travels to Jamaica to uncover history on the other side of the family and learns of tremendous hardship and suffering, as well as some uncomfortable history.

Meanwhile YouTuber Joe Sugg discovers a remarkable family history as far back as the Great Fire of London, and comedian Josh Widdicombe traces his lineage back to the Elizabethan and Tudor courts.

Executive producer for Wall to Wall Colette Flight, says: “Who Do You Think You Are? is back with another line-up of Britain’s best-loved celebrities exploring their family histories across the UK, Ireland, Denmark and Jamaica.

“The incredible personal stories they unearth of their ancestors’ lives – from royal love triangles to labourers fighting for their rights, from Victorian child sweeps to battling fascists in London’s East end – reflect and illuminate all our collective history.”