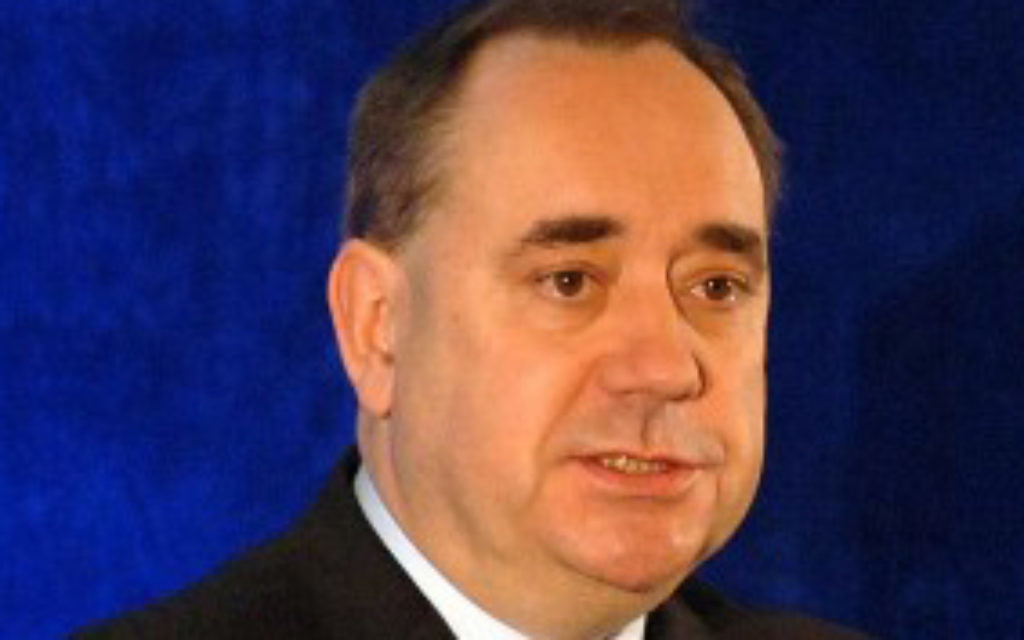 The search for a site for the UK’s new national Holocaust memorial was launched last night as it was announced Alex Salmond will play a key role alongside the director of New York’s 9/11 memorial in ensuring the memory of the Shoah lives on in Britain.

The former Scottish National Party leader and newly-elected MP will join the board of the United Kingdom Holocaust Memorial Foundation, it was announced at last night’s Holocaust Educational Trust dinner.

The Foundation is tasked with taking forward the recommendations of David Cameron’s Holocaust Commission, which include creating a state of the art education centre and memorial in central London.

Salmond said: “By ensuring generations come to understand the horrors that the world endured seventy years ago, the Foundation will create a lasting message about the dangers of prejudice and hatred taking root in any society. I’m proud to be involved with this work.”

Ed Balls and Lords Alliance and Feldman will also sit on the new board, representing the three other largest parties in Westminster, alongside CST chair Gerald Ronson. Their work will be supported by a Survivors Group and an Education Advisory Group, including representatives of the Charedi and Gypsy-Roma communities.

Inviting proposals for a suitable site for the memorial and learning centre, the Foundation has now published criteria including that it can accommodate events for up to 500 people and that it be created at a location with high footfall to ensure maximum impact.

Sir Peter Bazalgette, the Foundation’s chair, also told guests at the Guildhall  that testimony from 20 survivors had been recorded as part of its work, and he urged survivors and liberators who had not already done so to come forward.

Sir Peter said: “We have much to do to ensure that Britain will always remember humanity’s darkest hour. I am delighted to welcome such a wealth of experience and talent to the Foundation’s board. With cross party support, we have established a UK wide consensus and together we will honour Britain’s pledge to our remarkable survivors that their legacy be secured.”

Speaking to more than 400 guests including a host of parliamentarians, be praised the work of the Holocaust Educational Trust and joined fellow speaker Saajid Javid, the business secretary, in paying tribute to British hero Sir Nicholas Winton. He hailed the Royal Mail’s decision to issue a special stamp in his honour, congratulating Jewish News on its campaign for the rare accolade.

Javid said: “I call on every decent Briton, whether you’re of any faith or none, to join us all in the fight against extremism and anti-Semitism.  And I call on everyone here today to support the Holocaust Educational Trust, and to give the memory of the Holocaust a place within your walls. Because it happened. And it falls to us to see that it never happens again.”

It was also announced during the dinner – which was compared by two of HET’s young ambassadors – that Sir Eric Pickles will become the PM’s new Special Envoy for Post-Holocaust issues.

HET chief executive Karen Pollock said: “our challenge is how we ensure that the legacy of the Holocaust is preserved for generations to come, educating the next generation and continuing to challenge the antisemitism that continues to blight our society.”