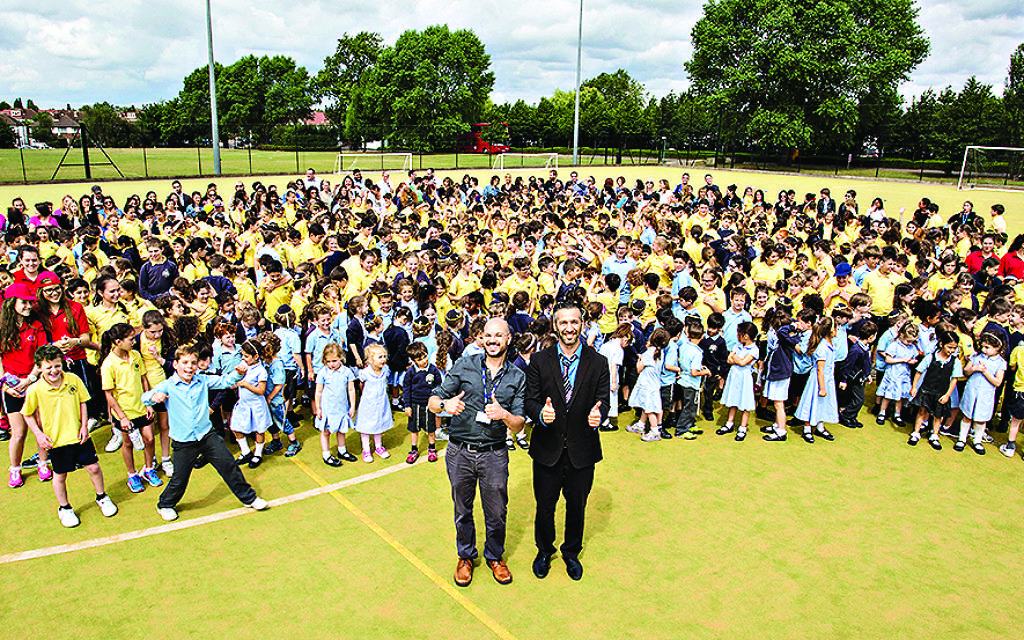 This week’s community-news roundup! If you want to send in your community stories, email: communities@thejngroup.com

Sinai school hops to it!

Sinai school hops to it! [Picture: James Shaw]
Pupils, parents and staff from Sinai School hopped into the record books last week after they took part in a world-record simultaneous hop. Beating the previous total of 674 participants, the attempt, which took six months of planning and organising, saw a new record of 691 people hopping for 10 seconds. This ensured they ended the school year with more than a spring in their step!

More than 90 former residents from the Norwood Orphanage from around the world met for a reunion – in the year which sees the charity mark its bicentenary of Royal patronage. Norwood Old Scholars Association chairman Jack Matthews arranged the reunion at The DoubleTree by Hilton Hotel in Holborn, which included the charity’s oldest resident, 102-year-old Kitty Freud. Matthews said: “We don’t have reunions very often so it was great to have it this year, with Norwood celebrating this special anniversary. People really made an effort to get here so we had a great turnout.”

A team of Tottenham Hotspur legends, including Darren Anderton, Ramon Vega and Justin Edinburgh, took on a team of Manna Meir Panim supporters in a charity football match to raise funds for the Israeli charity. Each of the 22 supporters raised enough sponsorship money to take on the stars for 45 minutes, although it was the former pros who ended up cruising to a 12-1 win. There was also a kids’ penalty shoot-out against the Spurs legends goalkeeper, which was won by Ben Corney. The match raised £10,000 to help those in poverty in Israel. Match organiser Laurence Stein said: “We’re delighted so much money has been raised to help those who are poverty-stricken.”

Eight young people graduated from Norwood Binoh’s transition and apprenticeship programme in a ceremony held at the Kennedy Leigh Family Centre. The scheme aims to help students with special educational needs and disabilities achieve their full potential and gain the qualifications they need to move into further education or into the workplace, through training and on-the-job work placements. Teacher Melanie Coberman said: “The students were an absolute joy. They have such wonderful personalities and they’ve now developed the confidence to go on to the next stage in their lives.”

Year 9 pupils from JFS have taken part in this year’s school Hand-in-Hand programme, an initiative which began 15 years ago and sees the pupils engage in meaningful educational volunteering opportunities. This year saw the JFS Jewish Informal Education Programme team coordinating the programme alongside GIFT, as students interacted with several organisations including Zaka, Shaare Zedek Hospital, Camp Simcha and the Michael Levin Lone Soldier Centre. Headteacher Jonathan Miller said: “At JFS, we are preparing our students to be the future leaders of our community. I’m proud that so many of our students engage in active volunteering and that our alumni play leading roles in so many of our communities’ charitable organisations.”

Five-year-old Samuel Van Emden, who was diagnosed with Acute Lymphoblastic Leukaemia (ALL), last September, has raised £2,300 for Camp Simcha after having his art work put on show in an exhibition. Having enjoyed art sessions with the organisation’s art teacher, Samuel is entering a less intensive period of treatment, giving him the opportunity to exhibit his creative efforts to raise money for the charity that has supported him and his family since his diagnosis. Samuel’s mother, Charlie, said: “Samuel loves the art sessions and they have been a real boost during the treatments. He has endured nine months of intense treatment, but has come out the other side with a smile on his face, like the superhero he is.” Camp Simcha art teacher Belinda Glyn said: “Samuel is a delight and the art he created is unbelievable for a boy his age. It’s also been incredibly beneficial, a real release for him as he chats away to me while he works. What he’s been going through is traumatic and this gives him a chance to offload while he focuses on something else.”

Mazeltov to the hasmo girls!

Mazeltov to the hasmo girls!

Year 7 Hasmonean girls celebrated their batmitzvah year in school, together with their teachers, mothers and grandmothers. The evening was packed with inspiring talks from their headteacher Rachel Fink, batmitzvah teacher Esti Kimche and guest speaker Joanne Dove as the 90 girls entertained the 200-woman audience with singing and insightful speeches. As part of their GIFT social action for the evening, the girls brought one of their new batmitzvah presents, which they wrapped on the evening, and donated it to those in need through GIFT.

More than 150 volunteers from the US and Canada helped in the GIFT warehouse as they packed Shabbat food parcels for recipient families. They also assisted in a football boot programme, created by StepUp@ GIFT, whereby they cleaned second-hand football boots.

Albie Jackson, Totteridge Millhillians Cricket Club under 13s A-team member, has raised £400 for Emunah through a fathers and sons’ cricket match. The Yavneh College student was fundraising for Emunah to mark his barmitzvah this September at Seed, Edgware, and was spurred on by his mother, Wendy-Jane Jackson, who runs Emunah on eBay charity shop.

Children at Bushey Gan Nursery and Pre-School enjoyed a visit from local firefighters.