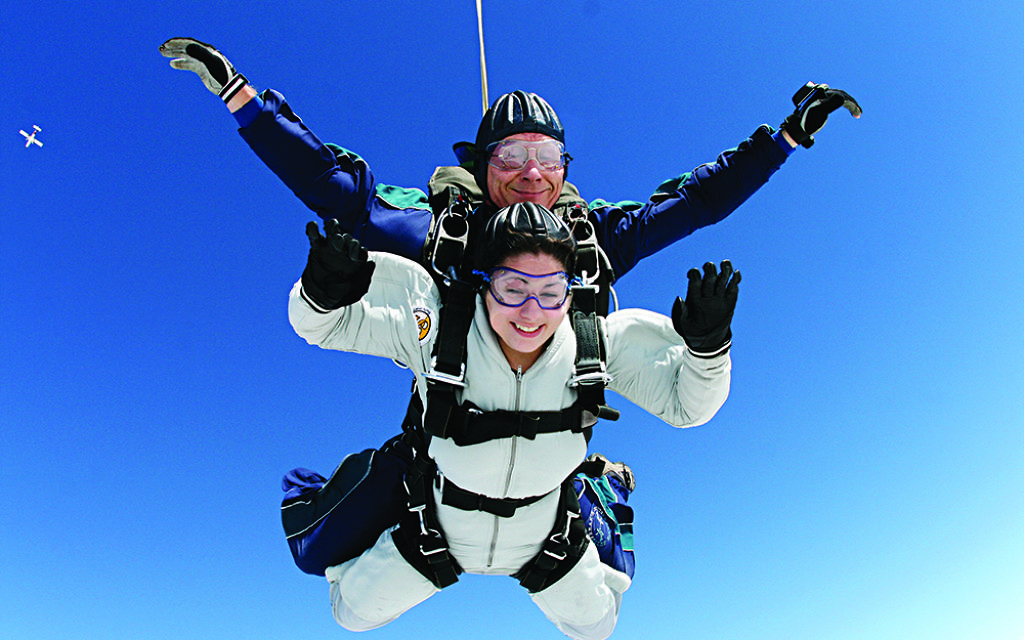 An inspiring young woman who defied a condition causing her constant pain to raise thousands of pounds for Jewish and non-Jewish charities has posthumously won the Jewish News-Mitzvah Day Community Hero award.

Rachel Morgan was selected from six finalists and dozens of entries after completing a series of physical fundraising feats including 13 skydives, despite suffering from Hypermobility Syndrome, which severely affects the body’s joints and pain pathways to the brain. Just three months before her death last month aged just 27, she underlined her relentless determination to help others by completed the Maccabi Fun Run in her wheelchair.

Among the causes she raised funds for through the challenges – and designing and selling jewellery – were Camp Simcha, Hypermobility Syndrome Association, RSPCA, Jewish Blind and Disabled and Marie Curie Cancer Care. And the fundraiser, who was nominated by Jewish Deaf Association, is still inspiring giving today after an online fundraising page was established in her memory by former classmates at Hasmonean to support Marie Curie in Hampstead – which supported Rachel.

Ilford North MP Wes Streeting – who joined a judging panel including Mitzvah Day founder Laura Marks, Sephardi community CEO Alison Rosen and Jewish News editor Richard Ferrer – said: “Rachel’s determination to raise money for such good causes through a range of physical tasks is even more inspiring given the physical she endured as a result of her condition. Her friends and family must be very proud of the way she triumphed in the face of adversity and lived her all-too-short life to the full.”

The award was collected by Rachel’s parents John and Judith at an event for volunteers marking the end of Mitzvah Day and attended by several other members of her family and friends. Judith – who was wearing one of Rachel’s dresses and a necklace she produced – said she was surprised at the honour after “so many deserving people” were short-listed.
But she said: “It’s a great honour. She’s probably up there laughing at the whole thing and deciding if she thought what I was wearing was appropriate. It’s nice to be able to contact friends and family and tell them there’s some nice news.”
She admitted the she had been “hesitant” about some of the challenges but added: “It did get easier – after the 13th skydive I was less anxious than the first one. It was fantastic to see the high it gave her from raising money as well as the physical activity giving such a thrill.”

Honour to present @JewishNewsUK @MitzvahDay hero award to parents of fundraiser Rachel Morgan, who passed away in Oct pic.twitter.com/Dob7000LhH

Tributes were also paid at the event to fellow finalist Esther Brookes, who passed away last Friday. Despite her deteriorating health, she created and ran a weekly session for Jewish Care residents in which they are encouraged to talk about their lives and passions.

The other finalists were Camp Simcha co-founder Meir Plancey; ForCrohns co-creator Natasha Adley; Holoacust Survivors Centre and Gift volunteer Simon Murray; and Jonathan Barr, who has twice run the New York marathon, on both occasions only months after treatment for cancer. He raised more than £11,500 for Chai Cancer Care and the North London Hospice alone in the second running last month.

In its tenth year, Mitzvah Day – praised by David Cameron as “a powerful movement for change” – saw a record 40,000 people giving of their time to support good causes both inside and outside the community, from visiting the elderly to cooking for the homeless to transforming local spaces.

Bringing together the cooking theme with interfaith that has become a hallmark of the annual day of social action, Muslim and Jewish women came together to rustle up some tasty treats at JW3. They were joined by communities minister Baroness Williams and Hampstead MP Tulip Siddiq. Among the other politicians taking part in Mitzvah day were Theresa Villiers, Oliver Dowden and Labour’s London mayoral hopeful Sadiq Khan, who helped serve soup at St Paul’s Church before heading to Oxford Street to collect supplies for Camden Winter Shelter.

Projects were also held in several other countries including Australia, Poland, Spain and Ghana. Marks said: “This year I was particularly impressed with the number of interfaith projects, particularly with Muslims, showing that fundamentally we are all citizens of the world with shared values and a burning desire to bring harmong, friendship and active giving to our local communities.”

Dan Rickman was named as the new director of Mitzvah Day.