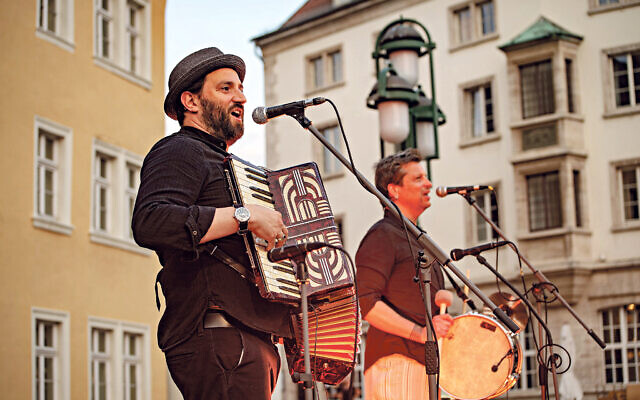 Organisers of Europe’s top Yiddish culture festival have said this summer’s theme is integrating the past, as a mammoth initiative to digitise 1,400 handwritten klezmer records gains momentum.

Yiddish Summer Weimar (YSW) 2021, in collaboration with the Klezmer Institute New York, takes place in Germany from 21 July to 21 August and showcases the new project to digitise hundreds of melodies and text notes from klezmer manuscripts.

Much of the material had been stored in the Vernadsky National Library of Ukraine, contained in notebooks created during expeditions through Eastern Europe before the outbreak of war in 1914.

Those expeditions, which in hindsight proved far-sighted, sought to document and protect Jewish music and culture of the era by capturing sound recordings, transcriptions of performed instrumental and vocal melodies, and photographs.

The digitisation is funded by crowdsourcing, but audio algorithms cannot recognise and interpret musical characters, so notation must be done by hand by experts in klezmer, Yiddish scholars and Russian speakers.

So far, volunteers have engraved around 450 melodies, about a third of the entire corpus. Institute director Christina Crowder said the project “was developed on open-source principles”.

An international community of around 200 volunteers have signed up to engrave, transcribe and translate the music and notes in the manuscripts.

“This approach reflects the creative impulse behind the act of ethnographic collection, which we hope to channel into the concert hall,” she said.

Historical sources as active ingredients in the creative process is a key focus of YSW 2021, held in locations around the city of Weimar, and festival workshops will explore ways to work with material from the past, including rediscovered melodies.

“For 20 years YSW has pursued a hands-on, project-based approach to learning and transmitting Yiddish and related musical cultures through co-creation that brings together scholars, performers, and audiences,” says YSW founder Dr Alan Bern. “Engaging with this largely oral culture means acquiring a range of skills that are not yet part of a standard western musical education.”

Crowder added that klezmer was “more than just a musical style, it is an element of a larger fabric linking the Yiddish language, prayer, dance and vocal and instrumental repertoires”.