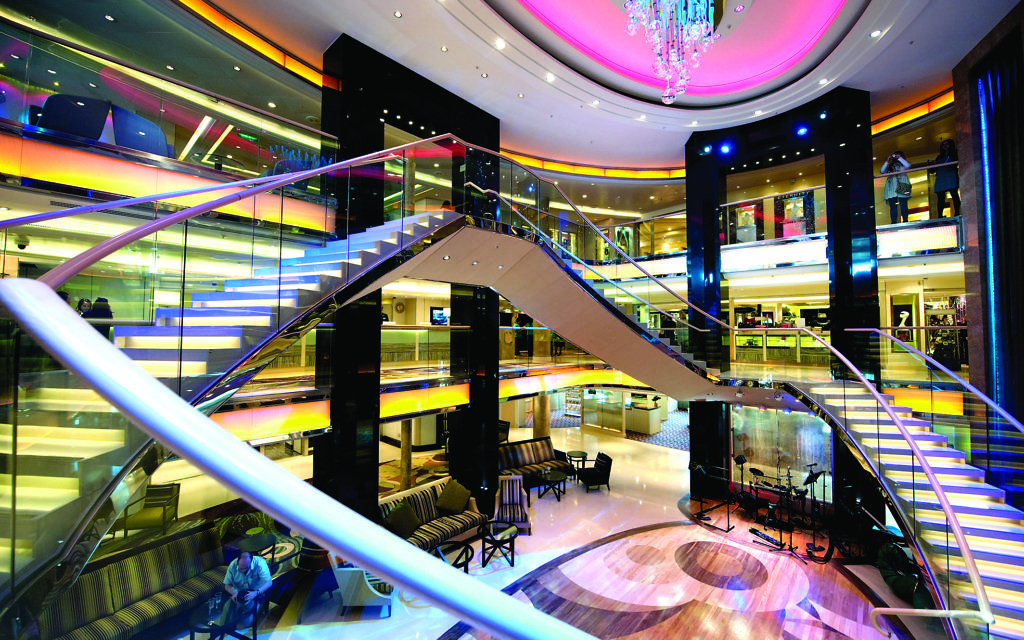 P&O Cruises Azura returns to Southampton after refit in Hamburg proudly showing off her new livery.
(Photograph by Christopher Ison ©)

It was refreshing not to have to worry about the weight or dimensions of our cases, or being affected by another air traffic or baggage handlers’ strike, or the children complaining, again, that their ears were hurting owing to the cabin pressure. What a pleasant change to leave behind the pitfalls of flying, jump into the car and drive direct to Southampton, home of P&O Cruises.

The last time I went on a cruise was in the 1980s with my parents and brothers, so I did not know what to expect on board the superliners that now serve the new millennium.

Launched in 2009, the Azura is a feat of modern engineering. At 115,000 tonnes, she towers magnificently over the ocean. An impressive three-floor atrium welcomes guests on board, with glass lifts to transport them to the majority of the ship’s 20 different decks.

There are various cabin options to suit every budget, from windowless inside four-berth rooms to sumptuous suites with
uninterrupted views across the sea. We opted for outside balcony cabins for our three nights on board. They were comfortable and our steward Connie ensured we were looked after.

At just over £300 each, this package seemed good value, especially considering most of the ship’s on-board facilities, as well as dining in some of the restaurants, room service and breakfast in bed, were included in the price.

A daily newspaper delivered to guests’ cabins details the array of activities available. From an early-morning stretch-and-relax session with personal trainers to a tour of the art in the ship’s own gallery, the variety of pursuits is impressive.

There are five swimming pools, including an adults-only version. ‘The Reef’ is the on-board club for tots to teens. Under-twos have the ‘Sea Bed’ club in the day, while little ones aged from six months to four years have a night nursery so mum and dad can leave them supervised and secure with a pager until two o’clock in the morning.

During the day, ‘Splashers’ club caters for two to four-year-olds with a specially-designed ball pool, arts and crafts tables, home corner, entertainment consoles, toilets and a baby-changing facility.

Older children from five to eight can enjoy ‘Surfers,’ with a choice of PlayStations, sports challenges and painting. ‘Scubas’ for nine to 12-year-olds has the latest technology and entertainment equipment as well as arcade games and art stations, while teenagers have their own dedicated club, ‘H20’. A mix of music, interactive games and discos are just a few of the activities on offer.

All the age groups have their own secure exclusive areas and with the exception of H20 children have to be registered and signed in and out by a parent. Assistant manager for youth, Chris, showed a real passion for working with children; indeed, P&O’s children’s clubs are approved by the NSPCC and you’d be hard pushed to find such a professional, friendly and reassuring set-up on land.

As much as there was to do on the ship, it was still nice to get off, although not all passengers did. Our first port of call was Guernsey, the most westerly of the Channel Islands. Owing to Azura’s size, we had to disembark by tender as St Peter Port can’t accommodate such a large vessel. With more than 3,000 holidaymakers on board, this process seemed badly planned and far too long. Regular cruisers assured me this was a one-off, but waiting two hours was annoying as it ate into our time on terra firma.

There is a wide choice of shore excursions and, for many, booking and paying for these on-board takes the effort out of exploring on shore. Organised coaches with tour guides all vetted by P&O ensure time away from the ship is just as enjoyable as time on-board.

We decided to explore on our own and were impressed by the island’s laid-back way of life and quaint architecture. Guernsey has its own banknotes, coins, stamps and postal system, with charming old blue post boxes. It has no representative in the British Parliament and makes its own laws and fixes its own taxes. This may be the reason why finance is its main earner, with many financial institutions incorporated here. The familiar sight of Marks and Spencer on the main harbour road, however, is a reminder it’s still unmistakably part of the UK.

Back on board, it was formal night, which happens at least once on most cruises and was included in the fare. We could eat in a choice of restaurants, which gives you the flexibility to arrive when you want and wait for a table. Our party of two families, including four younger children, totalled 11, so a paging system tells you when a table becomes available for your group size.

Govind, the charming head waiter in the Meridian Restaurant, was extremely attentive and thoughtful in offering us a selection of vegetarian dishes which we could pre-order for the following night when he realised we didn’t eat certain things on the menu.

Ornate glassware, black-tie waiters and crisp clean tablecloths give dining a real sense of occasion. Some of us opted for the five-course Marco Pierre White menu.

This sounded very appetising, but promised more than it delivered. With all the razzmatazz and hype surrounding eating on a cruise, the food was disappointingly average throughout. It was surprising to see plates of food with clear plastic covers, the type used in hospitals, being delivered into the restaurant in this way. For a supplement, you can dine in various speciality venues and on the last night we ate at the Beach House, where the £5-per-person supplement was well worthwhile as the food was much better than the inclusive dining.

Kosher meals by Hermolis are available and a full list of dishes is sent to customers when booking to be returned to the cruise line six weeks before departure.

Additionally, matzah crackers are carried on board and P&O offers breakfast cereals kosher stamped and individually boxed. Last year, the company carried 364 kosher passengers and also offers a wide fish and vegetarian menu from its own kitchens. Drinks are extra, but well priced – the most expensive bottle we could see on the menu was £22.50 and champagne was £39.50. The kosher wine is Carmel Ridge red or white at £16.50 per bottle. A cruise card is used for all extra spend items and shopping and simply charged to your credit card on the last day.

Our cruise was on the weekend of the FA Cup final between Arsenal and Aston Villa, and although the Azura had a sports bar, many customers were appalled the game was not broadcast. Fans from both teams were ranting at the reception staff demanding to see the captain. Whichever team you support, it is reasonable to expect such a match to be shown on a British ship in British waters with British punters and on this occasion P&O failed miserably to plan in advance and subsequently respond to its customers’ needs.

We docked in Zeebrugge for the second and last stop, from where we travelled to spend the day in Bruges. The city is dominated by its Market Square and its most remarkable landmark, the 260ft Belfry, It was a real pleasure to wander around Bruges and sample the local beer and visit the many chocolatiers for which Belgium is famous.

The next morning we docked in sunny Southampton and, after breakfast, headed home. All in all, it is a great experience where the ship itself is the destination. This great name in cruising is staying true to its heritage, but it does need to modernise for its customer base, maybe by introducing well-known eateries on board, as Center Parcs has done, as the food on board simply didn’t make the grade. Today’s tech-savvy traveller also expects internet to be free and maybe P&O should consider this in the future.

However, with a first-class kids club, something for all the family and attentive charming staff, why not try something a little different by taking to the seas?