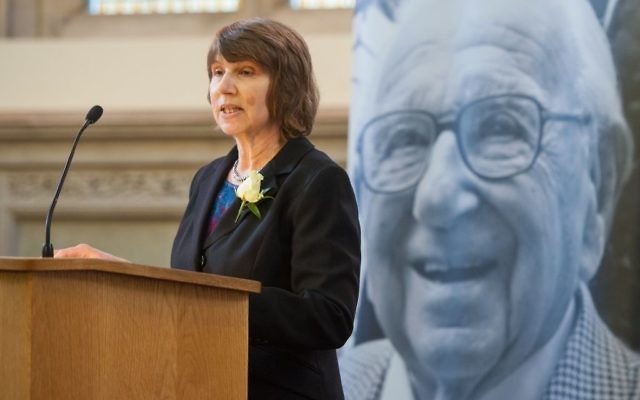 Barbara Winton, the daughter of Sir Nicholas Winton, - compared the “dehumanising language” of the Nazis to that seen in 2018 (Photo credit: Dominic Lipinski/PA Wire)

The daughter of Sir Nicholas Winton – who was hailed “Britain’s Schindler” after saving hundreds of children from Nazi tyranny – has called on Theresa May to reverse the closure of the Dubs refugee scheme.

Barbara Winton issued a personal appeal to the Prime Minister amid a mounting storm over the future of the programme for resettling lone youngsters in the UK.

In a letter to the Prime Minister, she wrote: “Donald Trump’s refugee ban echoes the terrible failures of the human spirit that, on the eve of the Second World War, saw country after country close its borders to Jewish refugees in urgent need of protection.

“‘If it’s not impossible’, he used to say, ‘then surely something could and something must be done’.”

The so-called Dubs Amendment, named after its architect the Labour peer Lord Alf Dubs, requires the government to relocate unaccompanied refugee children from other countries in Europe.

It emerged on Wednesday that a total of 350 youngsters will arrive under the scheme, sparking a furious backlash from campaigners and politicians who had originally campaigned for 3,000 to resettled.

Ms Winton went on: “The government has now announced the total figure of children to be helped through Alf’s amendment and, sadly, has announced a close to the programme.

“Every single child’s life is worth every single thing we can give. That the country has taken any of these children show my father’s spirit lives on.

“As my father’s MP, I know he deeply valued the relationship he had with you towards the end of his life, and at his memorial you very generously described him as ‘an enduring example of the difference that good people can make even in the darkest of times’ and said ‘I hope that his life will serve as an inspiration for us all … and encourage us to do the right thing’.

“As the world once again teeters on the edge of dark times, I ask you to remember those words.”

Controversy erupted over the Dubs scheme after it emerged that it would come to an end after 150 unaccompanied children are brought to Britain, on top of 200 who have already arrived through the programme.

The Government was not tied under the amendment to any specific figure, but the announcement on Wednesday drew an angry response from critics who expected the final number to be far higher.

As the furore continued on Thursday, the Archbishop of Canterbury added his voice to a chorus of protest

The Most Rev Justin Welby said he was “saddened and shocked” at the Government’s decision to limit the number to 350.

Mrs May insisted the Government’s approach to assisting refugees is “absolutely right”, while Home Secretary Amber Rudd defended the approach to the Dubs scheme – saying British and French authorities feared it was acting as a “pull factor” for children to head to the UK and provided opportunities for people-traffickers.

The Home Office has insisted it is not giving up on vulnerable children and youngsters will continue to arrive from around the world through other resettlement schemes and the asylum system.

In total, more than 900 unaccompanied children were transferred to the UK from Europe last year.