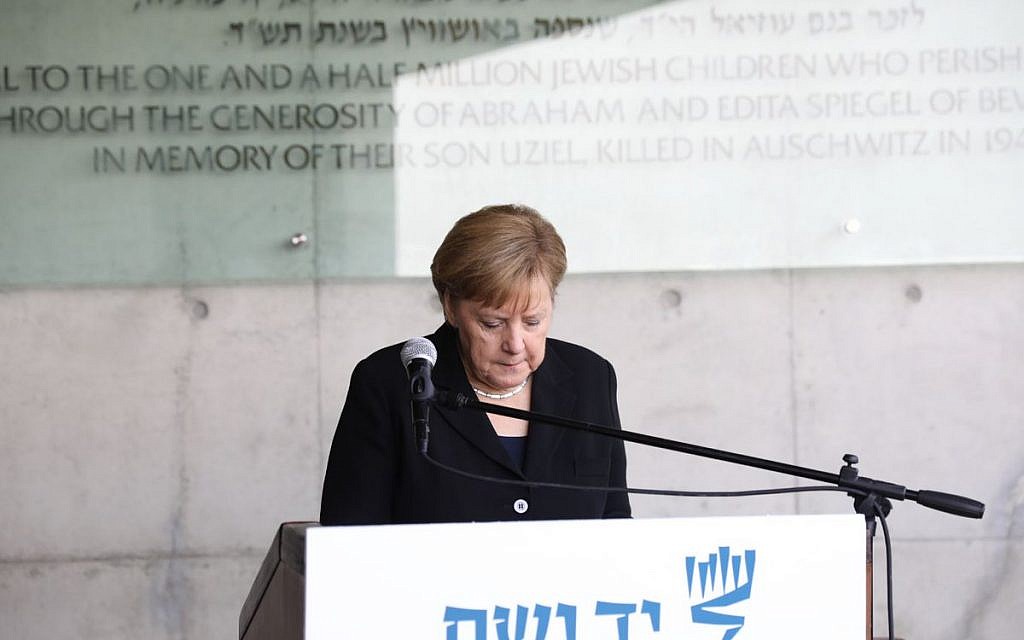 After a German court criminalised the nonmedical circumcision of boys in 2012, Angela Merkel did something very out of character for the “rule-of-law chancellor,” as she has been nicknamed.

Merkel said the ruling, which was brought against a person who circumcised a Muslim child, put Germany at risk of becoming a “laughingstock.” Her statement violated the country’s unspoken rule about chancellors not criticising the country’s judicial branch from their executive perch.

“I do not want Germany to be the only country in the world where Jews cannot practice their rituals,” she said at the time.

It was symbolic of Merkel’s commitment to the Jewish community “over realpolitik,” said Rabbi Pinchas Goldschmidt, the Zurich-born president of the Conference of European Rabbis. His organisation in 2013 honoured Merkel with a prize for “making a crucial intervention for enshrining milah in Germany and beyond,” as Goldschmidt termed it, using the Hebrew word for circumcision.

“She has been a steadfast ally, and not only in rhetoric but in decisive action,” Goldschmidt told the Jewish Telegraphic Agency.

In November, Merkel, 67, will step down after 16 years in power, ending the tenure of one of Europe’s most consequential leaders in recent memory. Her legacy — tainted for some by Germany’s acceptance of hundreds of thousands of Middle Eastern refugees and her policy of fiscal austerity toward the rest of the European Union — is mixed in her home country. But for the German and wider European Jewish establishment, her departure marks the loss of “a reliable partner for the Jewish community,” Josef Schuster, president of the Central Council of Jews in Germany, told JTA.

“I am deeply sorry to see Chancellor Angela Merkel leave the political stage,” said Charlotte Knobloch, a Holocaust survivor who heads the Jewish community of Munich. 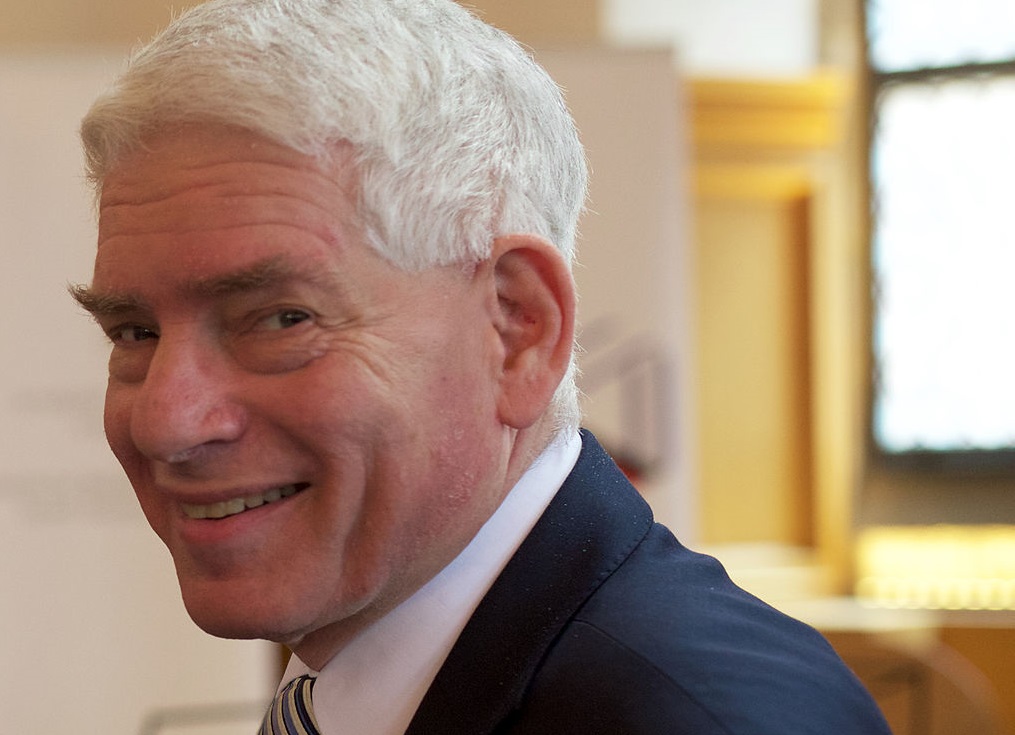 Merkel’s consequential policies have had significant impacts on German Jewry — both on the ground and politically, as the right-wing, populist AfD party and the more progressive Green Party have made gains in the wake of her party’s stumbles. Nevertheless, she leaves widely seen as a fighter for Jewish causes.

“It’s a mixed legacy, where the good greatly outweighs the bad,” Goldschmidt said.

The daughter of a Church minister from the former East Germany, Merkel is the European Union’s longest-serving sitting leader. She is not seeking reelection in Sunday’s general election, in which her centre-right party, the Christian-Democratic Union, or CDU, appears to be in a close race with the centre-left Social Democratic Party, or SPD.

As head of the E.U.’s largest economy, Merkel has pushed for pan-European solidarity. She has deepened Germany’s partnership with countries such as France and the United Kingdom — two nations Germany has turbulent history with. But her financial austerity measures — particularly toward Greece in 2015 as a precondition for an economic recovery bailout, which added to Greece’s political instability — alienated many Europeans, especially those from poorer economies. 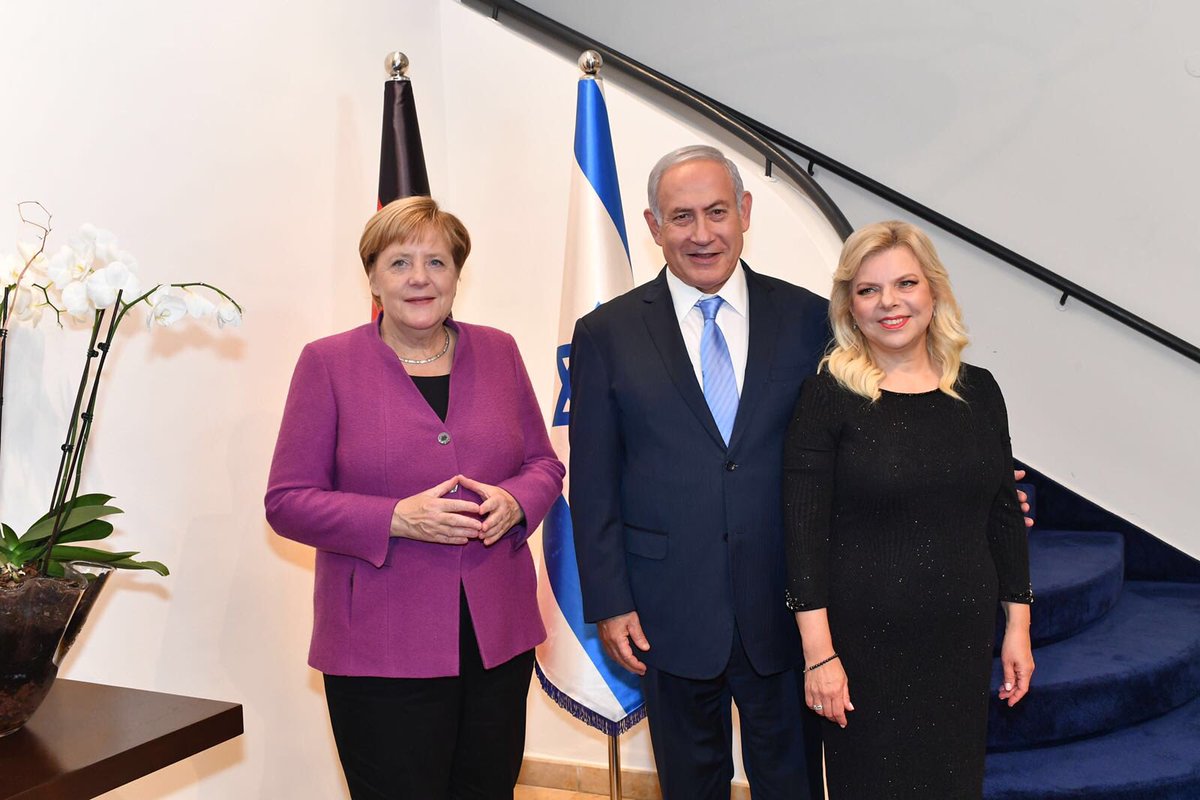 Domestically, she has overseen a tightfisted public spending policy — a frugality that helped Germany weather the economics of the coronavirus crisis better than most, with the help of a $1.2 trillion rescue funding plan. Her environmental policies include an ambitious plan to reduce CO2 emissions by 20% by 2040 in order to combat global warming.

But it was Merkel’s bold willingness to take in close to a million refugees — allegedly with little screening or long-term planning — at the peak of the Syrian Civil War that most polarised German society.

The move provoked a far-right backlash and helped fuel the rise of the AfD, or Alternative for Germany Party. The party seeks a return to “German as the predominant culture instead of multiculturalism,” tougher immigration laws and an end to public funding for mosques and other Muslim faith activities.

“As long as Merkel was strong there was no far right in the German parliament,” Goldschmidt said. “You can argue for and against the [refugees] decision on a moral level and on an economic level, but on the political one, it was an error.”

Some AfD leaders have advocated abandoning the apologetic rhetoric that has become the norm in Germany following its defeat in World War II and the trauma of the Holocaust. The party has also dealt with controversies involving antisemites and neo-Nazis in its ranks. The Central Council of Jews in Germany has urged citizens not to vote for AfD, calling it “a hotbed for anti-Semitism, racism and misanthropy” in a statement from Sept. 10.

But AfD, which is pro-Israel and whose program speaks of the “Judeo-Christian and humanist foundations of our culture,” has rejected claims that it has an antisemitism problem, and has kicked out multiple members for antisemitic behaviour and Nazi sympathies. It has some Jewish supporters, including a candidate for parliament in Berlin. 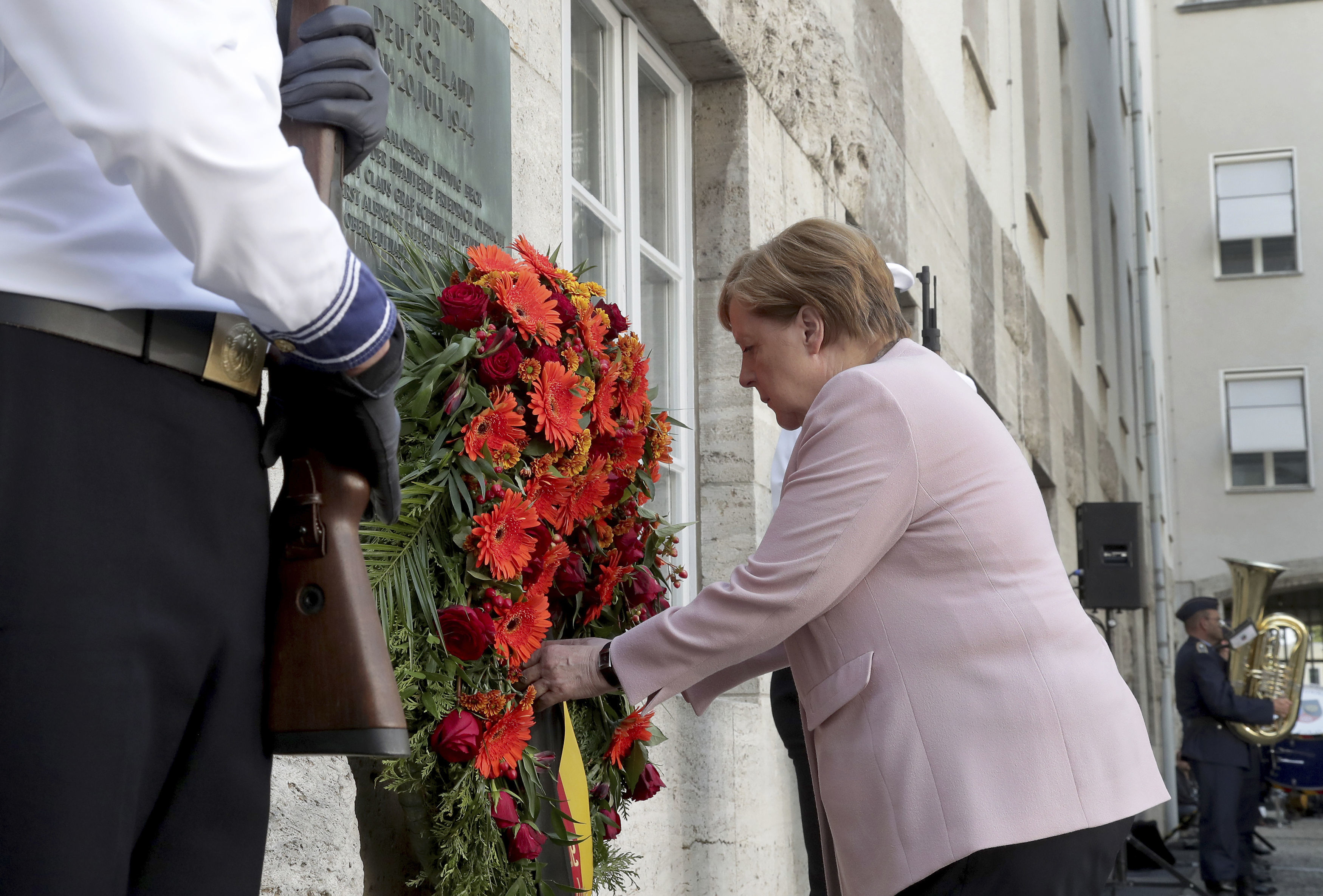 German Chancellor Angela Merkel adjusts a wreath during a memorial event at the Defence Ministry in Berlin, Germany, Saturday, July 20, 2019. On July 20, 2019 Germany marks the 75th anniversary of the failed attempt to kill Hitler in 1944. (AP Photo/Michael Sohn)

Some see a connection between these dynamics and the explosion in antisemitic incidents Germany has seen in recent years. The government documented 2,351 cases of antisemitism in 2020, the highest tally since 2001 and a 15% increase over 2019. The government attributes 90% of the incidents to the far right — epitomised in a neo-Nazi gunman’s attack on a synagogue in Halle in 2019. But critics of the government’s documentation practices say many of the attacks are actually carried out by people descended from Muslim families, and that Germany has downplayed those statistics to avoid looking Islamophobic.

According to those statistics, relatively few antisemitic incidents were perpetrated by people who came to Germany during the immigration crisis that began in 2011. But one such asylum-seeker was involved in the deadliest Islamist terror attack on German soil, a car ramming at a Christmas market in 2016 that killed 12 people. A 16-year-old Syrian refugee was arrested last week on suspicion that he planned to attack a synagogue near Dusseldorf.

Fears of the far right as well as the antisemitic attitudes of some German Muslims have risen so high that some Jews are questioning their future in Germany. And there are those who blame Merkel for the atmosphere.

“Just eight years ago I also voted for her. That was a big mistake,” said Pavel Feinstein, a 61-year-old artist and father of three from Berlin. “I’m thinking about aliyah,” he added, using the Hebrew word for immigrating to Israel. 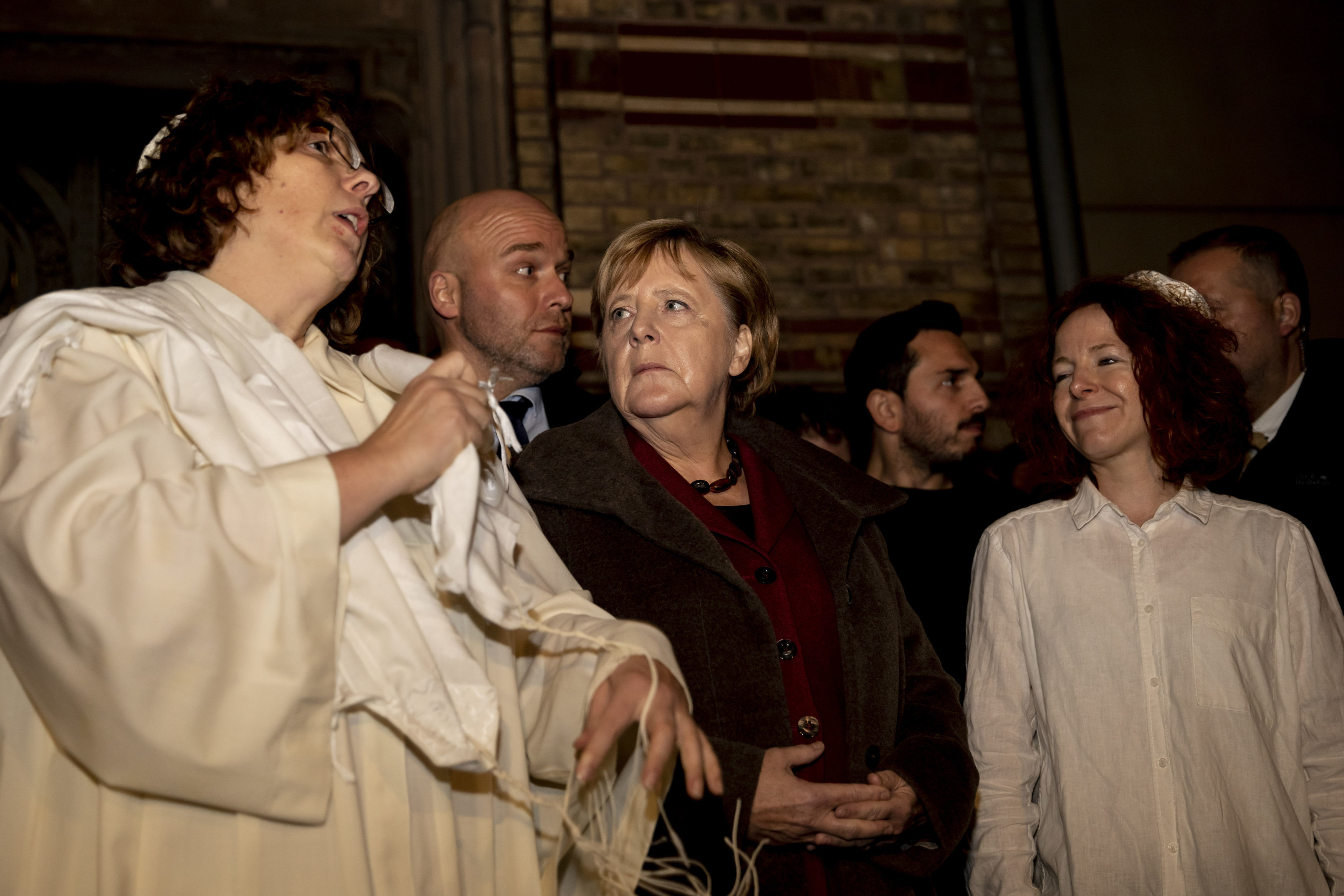 “I feel it is slowly but steadily becoming more and more uncomfortable and I don’t see any rosy prospects because of the demographic development,” he said, referencing the arrival of hundreds of thousands of Muslims to Germany. “She is responsible for it.”

Feinstein is one of the at least 100,000 Jews who immigrated to Germany from the former Soviet Union. He has in the past expressed support for AfD but declined to say who he intends to vote for on Sunday.

On antisemitism and Israel

Alongside the international scrutiny, Merkel has more quietly been a vocal leader in the fight against antisemitism.

During her tenure, Germany’s federal and state governments have all appointed special envoys for monitoring and combating Jew hatred. In the wake of the attempted Halle synagogue massacre near Berlin in 2019 — during which a far-right extremist failed to shoot his way into a packed synagogue on Yom Kippur and then killed two people near a kebab shop — Germany’s federal government gave German Jewry an extra $26 million for security needs.

In 2019, her government also allocated an extra $66 million for preservation work at the former Nazi death camp Auchwitz-Birkenau in Poland. During a visit there that year, her first visit as chancellor, Merkel said she felt “deep shame” at what her countrymen had done to Jews before and during the Holocaust.

“Remembering the crimes… is a responsibility which never ends. It belongs inseparably to our country,” Merkel said. “To be aware of this responsibility is part of our national identity.”

In 2015, Merkel became the first presiding chancellor to visit Dachau, the former concentration camp near Munich where the Nazis killed some 40,000 victims, many of them Jews. And this year, in partnership with local German communities, her government launched a series of events across the country celebrating 1,700 years of Jewish presence in Germany. 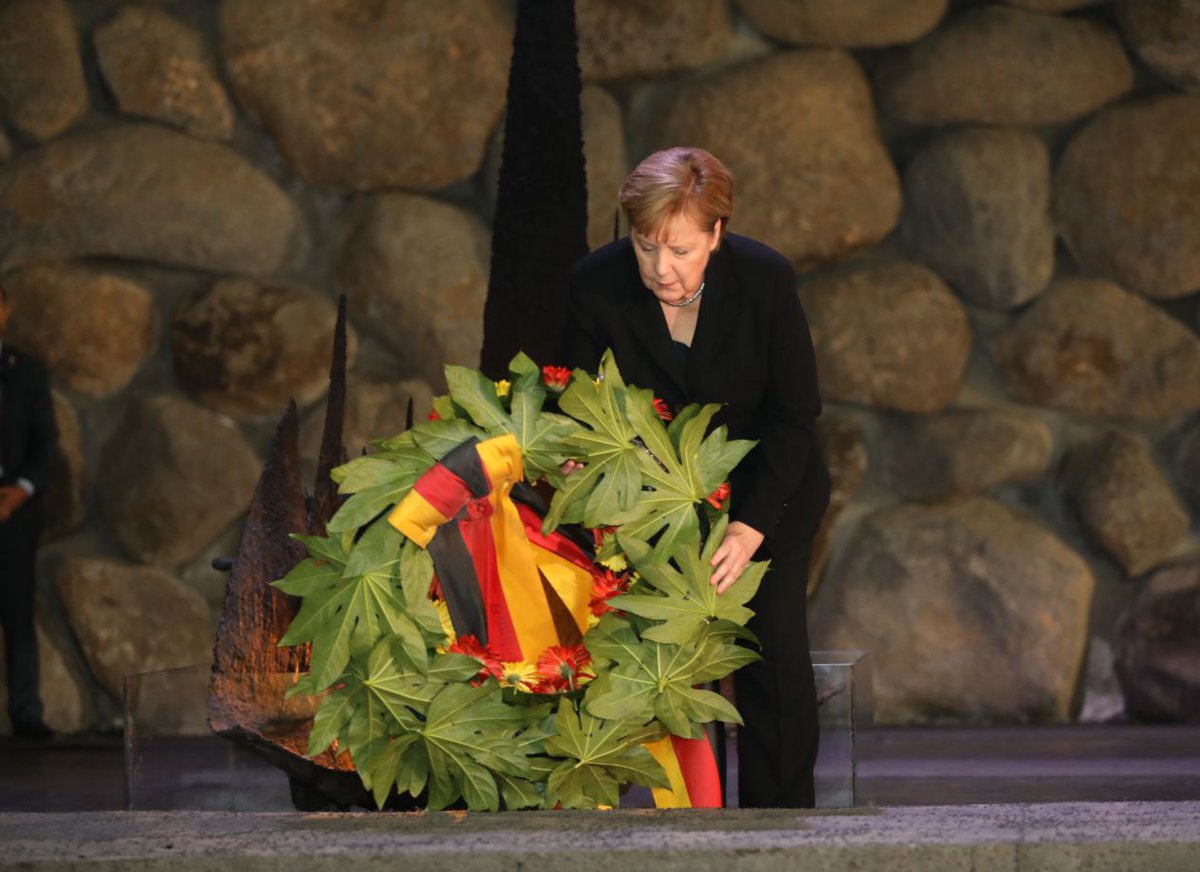 German Chancellor Angela Merkel lays a wreath during her visit to Israel’s national Holocaust memorial museum, Had Vashem. Credit: Had Vashem on Twitter

Regarding Israel, Merkel has advocated a two-state solution for solving the Israeli-Palestinian dispute, which at times put her at odds with former Israeli Prime Minister Benjamin Netanyahu, who opposed Palestinian statehood. But the two “agreed to disagree” on certain issues, and under Merkel, Germany has delivered to Israel multiple state-of-the-art navy destroyer ships, funding a third of the $500 million price tag for the project.

In 2019, the CDU guaranteed the passage of a resolution in the lower house of German parliament that calls the Boycott, Divestment and Sanctions movement against Israel, known as BDS, an antisemitic movement — an opinion many German Jews share.

Schuster pointed to one of the many speeches she gave to Israel’s parliament over the years, noting that she has said “that Israel’s security would never be negotiable for Germany, because Germany’s historical responsibility is part of the ‘reason of state’,” he said, meaning that it is intrinsic to Germany’s government policies.

During the Merkel years, “One has almost become accustomed to a pro-Jewish, pro-Israeli attitude in the government,” said Elio Adler, a dentist from Berlin and an activist promoting Jewish causes in German politics.

“And of course we hope that this will continue in the future,” he added.