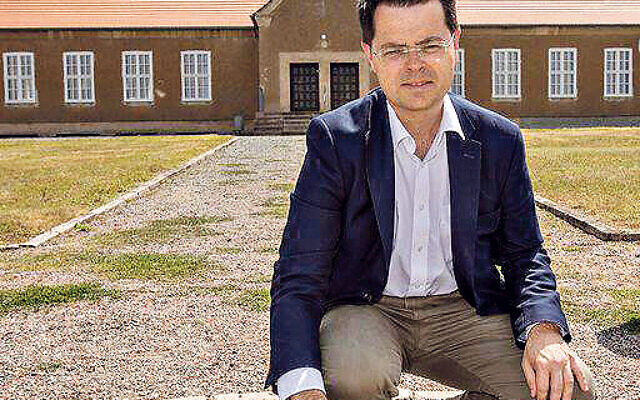 Standing at the site of the Buchenwald concentration camp near Weimar, Germany, James Brokenshire stares silently at the photograph. Taken in

1938, it shows rows of Jewish men lined up at what was a central cog in the Nazi network of extermination camps, where 56,000 people were sent to their deaths.

Brokenshire, the MP for Old Bexley and Sidcup and former Cabinet minister, is here as part of his work on a new £100 million Holocaust memorial in Westminster, but it is also the latest stop in an intensely personal journey. He has discovered that his wife Cathy’s grandfather, Artur Mamelok, was interned at Buchenwald.

“Artur was one of the lucky ones,” says Brokenshire, reflecting that more than 270,000 Jews, Roma, disabled and political prisoners were forced into this hell on earth. “He was able to get to England and have a life, which means I have my wife and kids. That could so easily not have been, given the numbers killed at Buchenwald and the horror and depravity there.”

From November 1938 to February 1939, in the aftermath of Kristallnacht – when 30,000 Jews were rounded up across Germany – the Gestapo incarcerated almost 10,000 Jews in a dedicated section of Buchenwald.

Conditions were designed to be so horrific as to force inmates out of Germany, signing away their possessions before they went. Some were forced into hard labour, often in the quarry or cleaning the latrine with their bare hands for up to 14 hours a day. SS guards meted out regular beatings, and a typhus epidemic, caused by an acute shortage of water and medical experimentation, claimed hundreds of lives by the end of 1938 alone.

Artur didn’t so much as utter the word Buchenwald to his son, Michael – Brokenshire’s father-in-law – before his death in 1960. But a note written by Michael’s mother Cilli shortly before her death in the early Nineties confirmed that both Artur and her father, Willi Caspari, had been snatched on Kristallnacht and taken to Buchenwald – while five aunts and four uncles were taken to other camps where they all perished.

Today, Michael, 83, stands on the spot where his father would have stood for the daily roll call seven decades ago. He and Brokenshire take it in turns to kneel in quiet reflection by a memorial to the inmates, following Jewish tradition by placing a stone on top. “Standing there as a free man in the sunshine, it’s impossible to imagine what took place,” says Michael. “Holding on to the gate gave me a sense of connection to my father. I looked at it and held on to it and thought: ‘He’d been through here’.”

During last month’s visit, researchers at Buchenwald presented the family with further documentation showing that Artur arrived with 963 people from Breslau and was incarcerated for 16 days, being freed a day before Willi.

Michael’s mother often spoke of Frank Foley – the MI6 agent who used his cover as a passport control officer at the British Embassy in Berlin to save 10,000 Jews – who helped her family.

“When Cilli got to the passport office, there were queues around the corner,” says Brokenshire. “She said she had to go to the loo but instead went straight to Foley’s office. He told her Artur would be freed, but would have to leave the country within 24 hours. When I was in Berlin on a ministerial visit in 2011, I was on the way to the airport when Michael mentioned the plaque honouring Foley in the city. I went back to take a photo, and that was the start of us trying to find out more.”

Research by Brokenshire’s 16-year- old daughter Sophie has uncovered records from Breslau Synagogue, and other archive documents have confirmed the link to Buchenwald,

though the family may never know any more about what happened to Artur and Willi during their time there.

Visiting the site, Brokenshire says, is a reminder of the enduring lessons of the Holocaust, which have become all the more relevant in the wake of rising anti-Semitism in Europe and the UK, a trend which he says “pains me greatly”.

“Too many British Jews are very uncomfortable and some would express fear that doesn’t reflect the country I believe we are. That some British Jews are thinking about whether they might leave Britain upsets and angers me.”

A poll last year for The Jewish Chronicle suggested nearly 40 per cent of British Jews would seriously consider leaving the country if Jeremy Corbyn becomes prime minister, amid claims not enough was being done to tackle anti-Jewish racism in Labour’s

Harrowing: Jewish prisoners line up at Buchenwald concentration camp, which James Brokenshire and his father-in-law Michael visited, right ranks. Anger has only grown since then, with 67 Labour peers recently joining forces to claim Corbyn had “failed the test of leadership”.

Brokenshire says the memorial and learning centre, due to open in Victoria Tower Gardens in 2022, will have lessons for all politicians of where hate can lead. “We have responsibilities to stand up for our communities. The lesson of the past is if you don’t confront it, if you allow it to ferment or somehow seek to ignore it, that takes you down a dark and dangerous path.”

The memorial is the central recommendation of a commission established by David Cameron, and was overseen by Brokenshire as communities secretary. (He was recently replaced by Robert Jenrick in the Cabinet reshuffle and has now returned to the back benches.) It has been endorsed by all of the past five

prime ministers and more than 170 parliamentarians. But government recently submitted revised plans after opposition from residents and the Royal Park Foundation over “the impact it will have on a popular public amenity in an area with few parks”.

Advocates and opponents are now waiting on the result of a planning application, but Brokenshire insists the Government has responded to “reasonable and legitimate points”, and says only seven per cent of the park will be taken up by the facility. “There could not be a more relevant, appropriate and proper place. We saw in Germany how a liberal democracy using laws and supposedly democratic means can lead to some of the most depraved and darkest moments of our collective history.

“The memorial and learning centre will stand as a reminder of the need for us to do all we can to stand against those who seek to divide. It’s not about the past, but the present and the future and our responsibilities.”

The centre will celebrate “absolute heroes” like Foley, he adds, while not airbrushing “uncomfortable” aspects of the Holocaust, including what more Britain could have done.

As they prepare to leave, he reads a psalm: “So that the generation to come might know the children, yet to be born, that they too may rise and declare to their children.”

“We have a duty to carry that message forward,” he says. “It’s so important to share the family story that I’ve become part of, to know that under the Nazi regime, my wife, my kids, I’m sure by extension me, would be treated in the same way and could have ended up in a place just like this. If we forget, we risk making the terrible mistakes of the past all over again.”