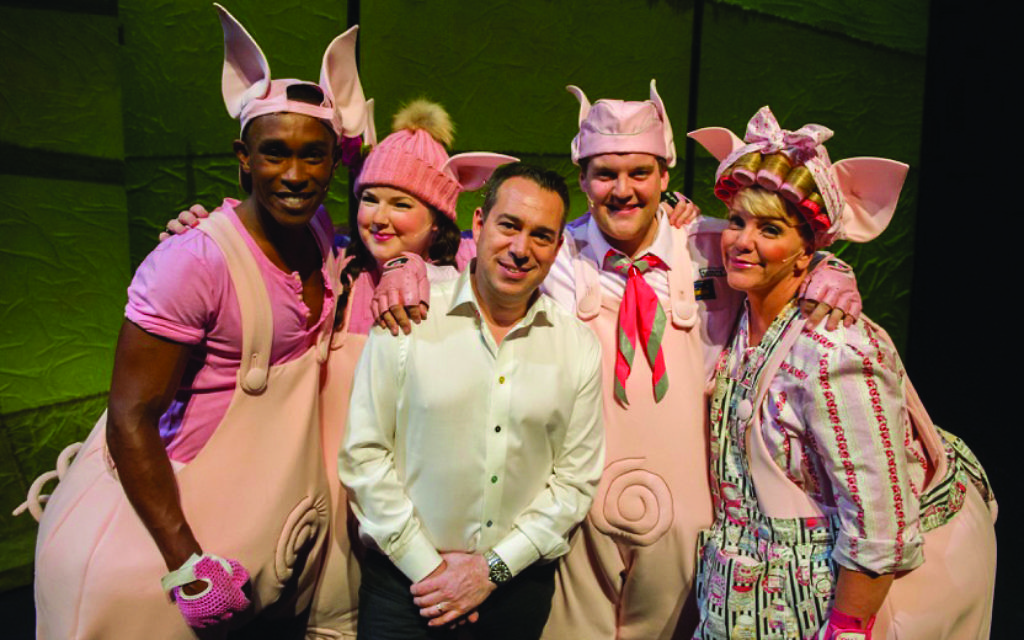 The Play That Goes Wrong

With five shows running in the West End at the same time, theatre producer Kenny Wax might seem to have a lot on his hands. But, as he tells Deborah Cicurel, he’s loving every minute of it..

Having one show in the West End is an achievement – but five is surely impossible.

Not, however, for producer Kenny Wax, who is breaking a West End record this summer with five shows in town: The Play That Goes Wrong, Dear Lupin, The 3 Little Pigs, The Gruffalo and Hetty Feather.

Wax, who lives in Hadley Wood, had dreamed of being a theatre producer since he was a teenager at the Jewish boarding school Carmel College, catching the stage bug during weekends spent in London watching mega-musicals such as Phantom Of The Opera, Les Misérables and Miss Saigon.

“I certainly wasn’t going to become an actor, but for some reason, I believed that producing musicals would be exciting and that was what I set out to do,” Wax says, adding that it was partly witnessing the joy of the audiences around him that led him to realising his vocation in life.

“I saw the original cast of Me And My Girl, starring Robert Lindsay and Emma Thompson, at the Adelphi Theatre in 1987,” he says. “It was musical comedy at its best, but it was also romantic and had some wonderful production numbers… As I watched that show and the audience having such a great time, I thought to myself: ‘I want to put on shows like that and be responsible for all that pleasure.’”

Wax, who cites his favourite shows in the West End at the moment (apart from his own!) as Miss Saigon, War Horse and The Curious Incident Of The Dog In The Night-Time – is certainly responsible for thousands of audience members’ pleasure now, with the unprecedented number of shows he has produced delighting children and adults alike across London. He clearly loves what he does, explaining each show with the enthusiasm that only someone who loves their job can express.

“The 3 Little Pigs is a brand new re-telling of the classic fairy tale, but we present it as a modern musical. It’s ideal for the three to nine age group, although it will also be enjoyed by all the family,” he says. “The show stars Blue frontman Simon Webbe, who plays the role of the wolf. The Gruffalo has been given a makeover, with beautiful new sets and costumes, and continues to enthrall and engage, while Dear Lupin is very funny and also extremely moving.

“The Play That Goes Wrong is the funniest thing you will ever see in the theatre,” he adds, “and Hetty Feather is a show for all the family, beautifully crafted and brilliantly performed.”

So, in the complicated life of the West End, where some plays go on for decades and others fail after mere months, what is the most important ingredient when it comes to a successful production? In Wax’s opinion, it’s all about the story.

“There is a saying in the theatre that the three most important ingredients of a successful musical are the book, the book and the book,” he says. “It means that without a really good story being very well told, the odds are stacked against you.” He adds that having a sense of humour is also vital, as many things can – and often do – go wrong on stage. Having been in the business for so many years, Wax has plenty of stories of on-stage mishaps – not that he has let them hold him, or his shows, back.

“Only a couple of days ago at the Duchess Theatre, where I produce The Play That Goes Wrong, one of the actresses got struck on the head by a falling curtain pole,” he recalls. “The deputy stage manager brought in the curtain and made an announcement. The actress was assessed by a first-aider and taken to A&E as a precaution. The rest of the cast improvised different comedy sketches to keep the audience from getting bored. The show continued 12 minutes later.”

The audience were none the wiser. “At the end of the performance, one of the cast made a speech to apologise for the delay,” Wax says. “Several of the audience still thought the whole thing was planned and part of the show because of the title The Play That Goes Wrong. It’s great when you can get away with it!”

Wax is married with three children – who must surely act as his most reliable musical critics – and despite his theatrical schedule still has time to sit on his synagogue’s board of management. “Being Jewish just permeates everything, doesn’t it?” he says. “I was with some very well-established writer friends the other day and they said to me that when we met more than 25 years ago, I was the first Jewish person they had ever come across.

“They recounted the story of how I went round for dinner and taught them about kashrut – what I could and couldn’t eat,” he adds. “Now their lawyer is Jewish, the accountant is Jewish and a couple of their best friends are Jewish.”

So what is next for the prolific producer? While he says he doesn’t find doing great revivals as enjoyable as original shows (“there’s less excitement putting on a show that thousands of producers have done before”), there could soon be a Broadway musical and even a TV collaboration in the pipeline. Mr Wax, as they say in showbiz, break a leg.

• The Three Little Pigs is at the Palace Theatre from 5 August. See www.3littlepigslive.com