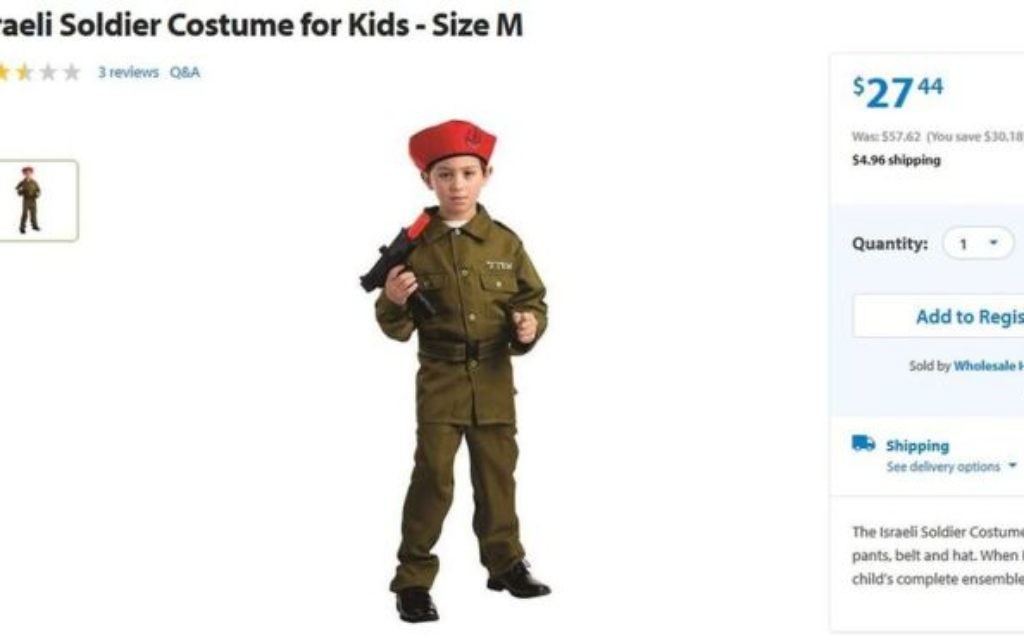 A US Supermarket chain has stopped selling a kids Israeli army outfit and a ‘Sheikh Fagin nose’ for Halloween, following  a stream of criticism.

Walmart priced the ‘Israeli Solider Costume for Kids’ at $27.44 (£17.90), including a shirt bearing hebrew writing, trousers, a belt and hat, for customers ahead of Halloween this Saturday.

A screenshot of the IDF soldier uniform on display on the Walmart website.

The costume was sold at a reduced price, saving over $30 dollars, with a description online: “When Halloween time rolls around, make this item part of your child’s complete ensemble.”

But it caused controversy, as social media users reacted with anger, accusing the supermarket of “supporting the killing and occupation of innocent children.”

Many posted on Walmart’s Facebook to show their disagreement, with some even calling for a ‘Walmart boycott.’

A user on Twitter wrote: “Dress your kid like a terrorist this Halloween”, whilst another said “Might as well sell a Hitler outfit for children as well!” according to the Independent.

A user expresses their dismay at the sale of the costume, as ‘supporting occupation’

Priced at $9.52, it features a “latex prosthetic nose perfect for an Arab Sheik”, which was branded as racist by numerous users on Twitter.

This was labelled as anti-Semitic by some users on social media, for referring to the character – Fagin, in the Charles Dickens’ novel Oliver Twist, which allegedly plays on anti-Semitic stereotypes.