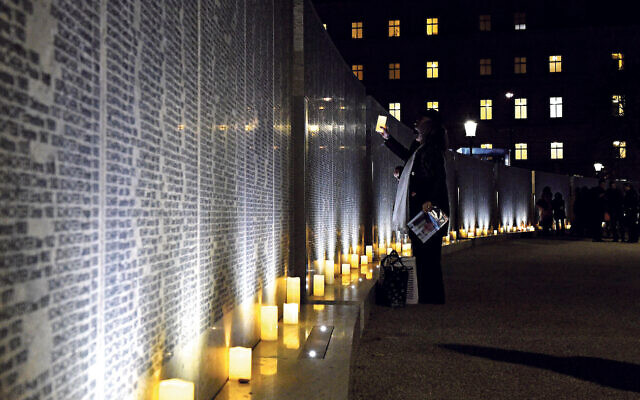 Vienna, Austria. People commemorate victims at Shoah Wall of Names Memorial in Vienna, Austria, on Nov. 9, 2021. Shoah Wall of Names Memorial was inaugurated at Ostarrichi Park in Vienna on Tuesday. The new memorial commemorates more than 64,000 Jews from Austria who were murdered or perished during the Nazi era. Credit: Guo Chen/Xinhua/Alamy Live News

Austrian and European Jewish leaders inaugurated a new Shoah Wall of Names in central Vienna on Tuesday to mark the 83rd anniversary of Kristallnacht.

The memorial is engraved with the names of 64,440 Austrian Jewish victims of the Nazis and complements an existing Holocaust monument in the city, at Judenplatz, where senior Israeli and Austrian leaders held a ceremony earlier in the day.

Hannah Lessing, the secretary-general of the National Fund of the Republic of Austria for Victims of National Socialism, also attended, as did Vienna’s Mayor Michael Ludwig, and Sebastian Kurz, who was Austria’s popular pro-Israel Chancellor until he was forced to resign last month.

Addressing the assembled dignitaries, Deutsch said the inscribed family names on the wall “not only give the relatives of Shoah victims a place to commemorate their family’s individual fate in a central and public square in Austria’s capital [and] makes clear that the Shoah is nothing anonymous, nothing abstract”.

Earlier in the day, the European Jewish Congress (EJC) presented a vast five-volume academic study on the history of antisemitism and “how to defeat [it]”. A collaboration between universities in Vienna, Tel Aviv, and New York, it had the official support of Wolfgang Sobotka, the president of the Austrian National Council. 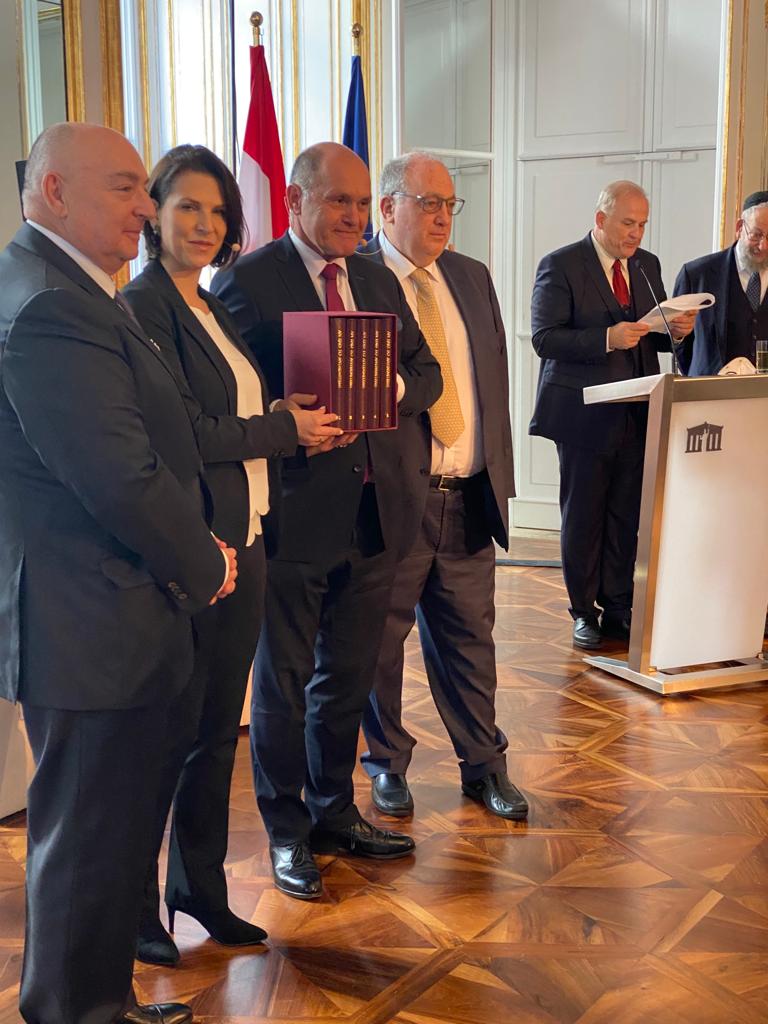 “This is the most ambitious study of the problem of antisemitism,” said EJC president Dr Moshe Kantor, who brought 119 worldwide academics specialising in antisemitism together in 2018 for a unique conference in Jerusalem.

“It details the groundwork for a united and concerted preventive action plan for society today and in the future. We will distribute it as widely as possible, so that it can be used as a force multiplier by governments, academics, religious institutions, the media and others.”

Among the study’s influential contributors was Katharina von Schnurbein, the European Commission’s Coordinator on Combating Anti-Semitism, and Natan Sharansky, the former chairman of the Jewish Agency and renowned Soviet refusenik. Senior Christian and Muslim religious leaders also had an input. 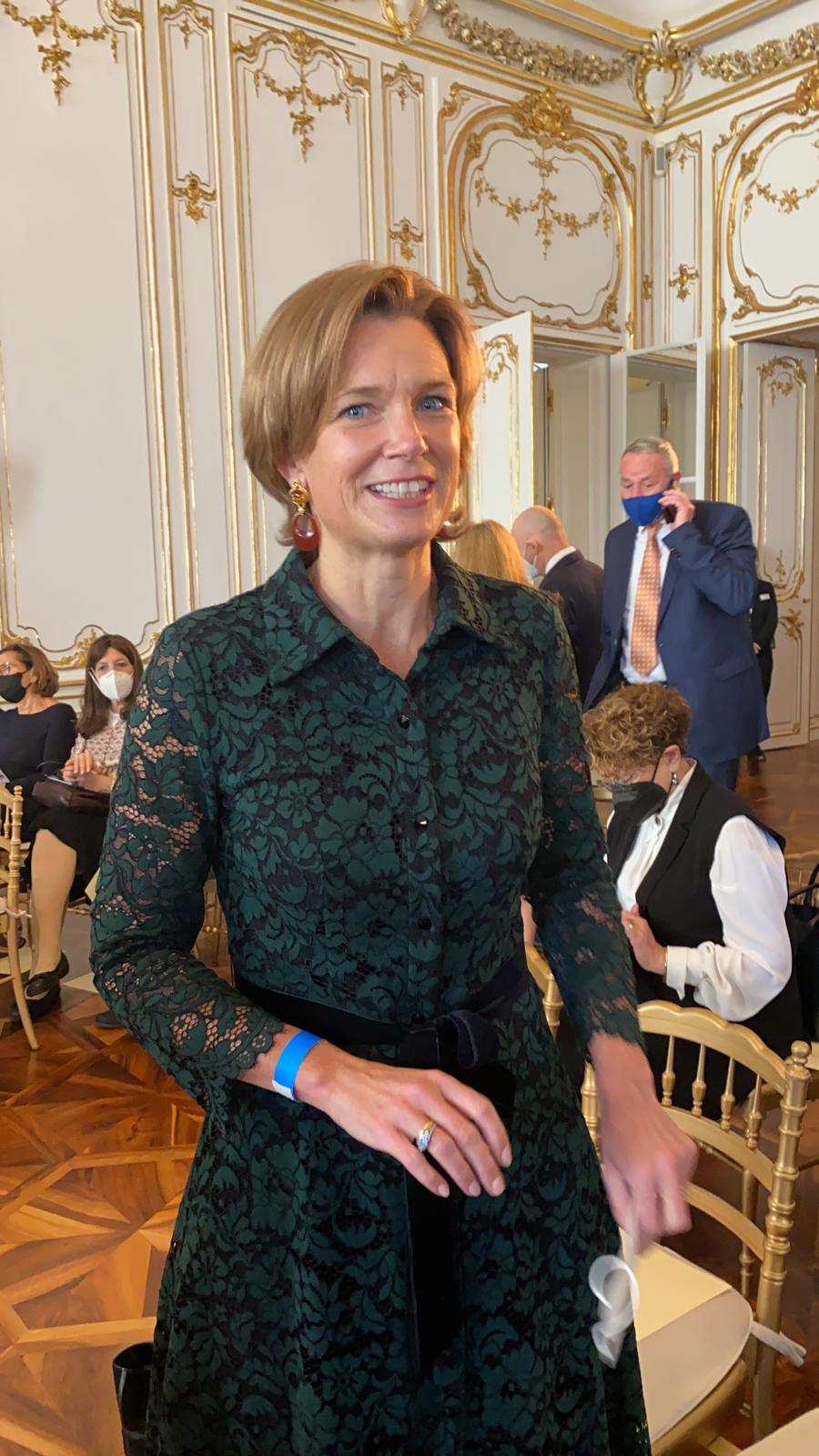 “Eighty-three years after Kristallnacht and 76 years after the end of the Shoah, hatred, disinformation, conspiracy theories about Jews and the Jewish state are more than ever circulating online and poisoning hearts and minds,” said Kantor.

“Thanks to significant efforts around Europe, we are seeing great progress at the political level. Nonetheless, the problem of antisemitism in society is unfortunately getting worse. While there is an obvious will on the part of governments to fight Jew-hatred, they must be given the tools to have the most impact to suppress this scourge. This is what we are releasing today.”

In addition, Kantor was awarded the Grand Decoration of Honour in Gold for Services to the Republic of Austria, the country’s highest decoration, as Sobotka lauded “his fight against antisemitism, racism, extremism and intolerance”.

Likewise, Kantor thanked the Austrian authorities for prioritising Holocaust survivors in the rollout of the Covid-19 vaccination programme.