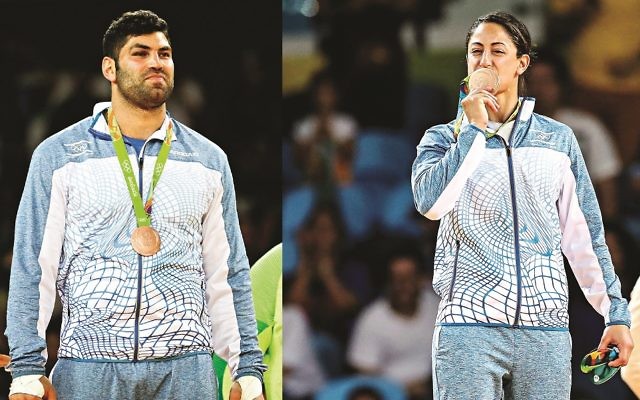 With the end of the year fast approaching we want to know your top Jewish sportsperson of 2016.

Read details of our ten nominees and then cast your vote in our poll at the bottom of the page.

The main event of the sporting year was the Olympic Games, so it’s no surprise that half of our nominees competed in Rio.

Israel’s first medal of the Games saw Yarden Gerbi become the first Israeli women to win an Olympic medal in 24 years. Dedicating her judo bronze to “everyone in Israel”, she said: “Whoever said you can’t succeed in Israel, is wrong.”

Israel’s first medal of the Games arrived in Judo when Yarden Gerbi beat Japan’s Miku Tashiro to win bronze in the 63kg event. Becoming the first Israeli women to win an Olympic medal in 24 years, she dedicated her win to “everyone in Israel”, saying: “The medal is for all of Israel, for everyone who supported me and cheered me on. I gave my soul and it paid off. Whoever said you can’t succeed in Israel, is wrong.”

Ori Sasson made headlines, both on and off the judo mat, when he won Israel’s second medal of the Games. His route to beating Alex Garcia Mendoza to win bronze in the 100+kg event, saw him beat Islam El Shehaby, though the beaten Egyptian refused to shake his Sasson’s hand, which caused world-wide headlines and the Egyptian Olympic Association sending him home. Speaking about his win, he said: “My dream came true in front of my eyes. I have worked so hard for this. I’ve had so many wins and so many losses and today was my day. I defeated all my fears. I felt it was going to happen. I worked so hard. I am so happy for the Israel, for myself, and for my family. Today I was a warrior.”

History was made in the swimming pool in Brazil when Anthony Ervin became the oldest ever Olympic swimming champion at the age of 35. Winning the 50m freestyle – the same event he won joint-gold in 2000, he quit the sport, during which time he attempted suicide, worked in a tattoo parlour, played in a rock band and sold his gold medal to donate the money to Tsunami victims. Speaking after his latest win, he said: “It’s surreal, it’s almost absurd I was able to do it again.”

Another American who was among the medals was gymnast Aly Raisman. Winning three medals – gold in the Team event – which she captained – and silver in both the Floor Exercise and All-Around and events, the latter of which she said: “To get a standing ovation so it was very emotional. This was the best arena and atmosphere I’ve ever been in. It was just incredible and was a moment I will never forget.”

Inbal Pezaro cemented her status as being one of Israel’s greatest ever Paralympians after winning three medals in Rio. Having won three medals in the previous two Paralympics, she reached the final in all five of her individual events.

Away from the Olympics, Barak Bakhar has taken the Israeli football scene by storm, delivering Hapoel Be’erSheva their first league title in 40 years. In their first European campaign, he was a missed penalty away from guiding them into this season’s Champions League group stage, beating Olympiakos and Celtic along the way, and they have now qualified for the last 32 of the Europa League, drawing 1-1 at Southampton to knock out the Premier League side.

On the pitch, Eran Zahavi set a new Israeli record for league goals scored in a season – scoring 35 goals in 36 league games for Maccabi Tel Aviv. His eye-catching form was spotted by Chinese side Guangzhou R&F, who then paid a record transfer sum for an Israeli footballer, signing him for £10 million in August. The midfielder scored on his debut, and currently has 12 goals in 11 games.

Closer to home, Scott Kashket has enjoyed a tremendous first half of the football season at Wycombe Wanderers, helping them to a play-off spot in League Two. Beginning the season at Leyton Orient, he moved to Buckinghamshire, joining fellow Jewish footballer Joe Jacobson, and has been an instant hit. Initially on trial, the 20-year-old recently signed a three-year deal with the club and has so far scored 11 goals in 12 appearances, including an FA Cup hat-trick against Chesterfield earlier this month. Telling Jewish News how he’s “very happy” at Wycombe, he was even more delighted with his hat-trick, saying: “It’s something growing up I’ve dreamt about – and now I’ve been lucky enough to do it in the FA Cup. Walking away with the match ball was brilliant, it was an amazing feeling.”

Israeli tennis is currently going through a baron spell. Gone are the days of Shahar Peer commanding a top-10 place in the rankings, with the glory days of doubles duo Andy Ram and Jonathan Erlich firmly confined to the history books. However, there is hope in youngster Yishai Oliel, who saw his growing reputation continue to blossom when he landed the junior double title at this year’s French Open. His coach Jan Pochter believes he can make it at the top end of the game, saying: “I think he needs to get stronger physically and mentally and to improve all parts of his game. If he does, he has a chance to become a very good player. We look forward to him playing on the professional level. I think he can do it.”

Hannah Knyazyeva-Minenko leapt into the record books this year by becoming the first Israeli female to win a medal at the European Athletic Championships. Winning silver in the triple jump event, she also matched the best ever finish for an Israeli in an Olympic athlete competition when she claimed a fifth-place finish. Still only 26, the Ukrainian-born star is earmarked for future success and already a medal hope for the 2020 Olympics.