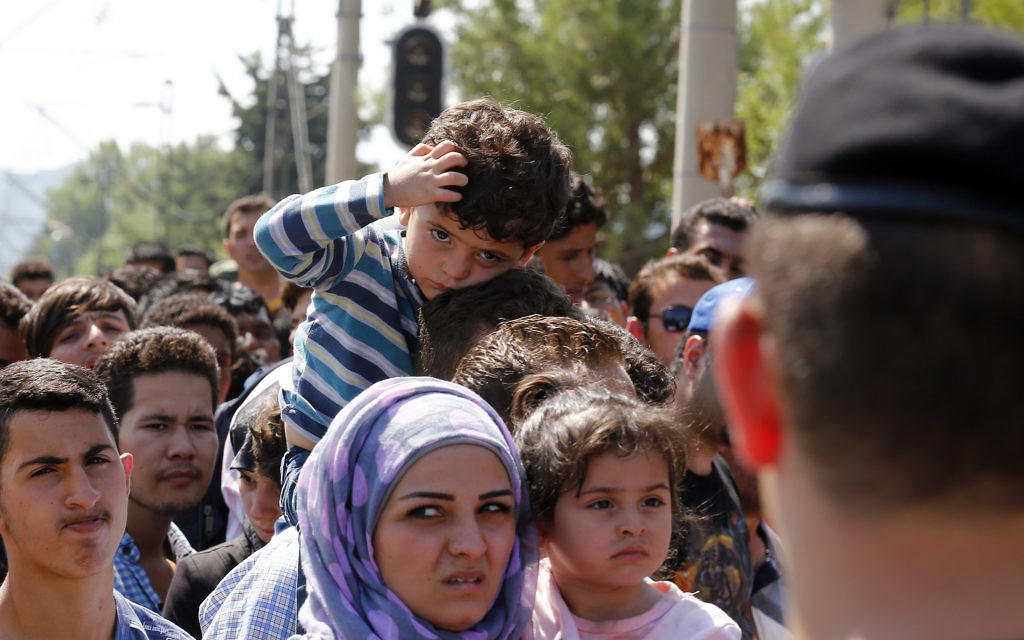 Migrants in Hungary on their march towards Austria. (Source: Wikipedia)

History teaches us the cost to innocent people when we delay in the face of an emergency. Jews are particularly sensitive to the fate of those who appear abandoned by the world.

Those thoughts and that urgency – voiced by a Liberal rabbi in London but loudly echoed across our community – this week culminated in a spine-tingling moment when British Jews rose up in unison and said: “Let them in!”

That this is an emotional issue for Jews is lost on no one. And for a while last week, the prime minister’s reluctance to open the gates brought a rare rebuke from an otherwise Cameron-friendly community.

To date, the UK has taken in less than 300 refugees – inaction which senior Masorti Rabbi Jonathan Wittenberg said was reminiscent of the Evian Conference convened by President Roosevelt in the summer of 1938, to find solutions for tens of thousands fleeing Nazi Germany.

He said: “No European country raised its quotas, allowing Hitler and Goebbels to observe that, while they complained about how Germany treated the Jews, no one else wanted them either.”

On social media, reminders of those dark days were widely reproduced. “The way stateless Jews from Germany are pouring in from every port of this country is becoming an outrage,” wrote Old Street Magistrate Herbert Metcalfe on 20 August 1938, in one such example. “I intend to enforce the law to the fullest.”

Metcalfe was not alone in his thoughts, which just goes to show what a gargantuan effort the Kindertransport truly was. This week that effort was recognised by other faith groups, with the Muslim Council of Great Britain asking the government to “rekindle the values” that saved thousands of Jewish children.

Such a spirit is yet to be recreated. Although the government’s commitment to take 20,000 Syrian refugees is welcome, this is over the course of a parliament, meaning just 4,000 per year.

Medicins Sans Frontier, a charity with three rescue boats in the Mediterranean, pulls almost half that number from the sea every week.

We should double that number. If synagogues across the country can keep finding rooms for refugees, it will surely happen. In addition, if we truly are to “rekindle the spirit of the Kindertransport” [the finest tribute to Sir Nicky Winton we can think of] we need to help refugees once they are here, too.

But the government seems to want to do the opposite. In July, rabbis from all denominations berated Downing Street for cutting funding for asylum-seekers by a third, saying it would “hit children hardest” and leave vulnerable families “destitute.”

Edie Friedman of the Jewish Council for Racial Equality (JCORE) captured the mood, saying: “We, as a society, should be offering them more than poverty.”

We agree. Let’s offer them a home, and with it, hope. Let’s give them a fighting chance for a decent future, away from those who want to kill them, just as young Jews from Europe were given all those years ago. Those questioning ‘return on investment’ need only look at today’s kinder for proof that a nation’s investment pays off. Needless to say, this is not about ‘investment’.

It is about doing what’s right. Over Yom Kippur next week, we will read from the Book of Isaiah: “Share your bread with the hungry, provide shelter for the destitute, and clothe the naked.” (Isaiah 58:7).

Moreover, the Bible tells us: “Do not oppress the stranger, for you were once strangers in the land of Egypt.” (Exodus 23:9).

Let our children one day say we heard the stranger’s cry and acted accordingly.

• For comprehensive information on the community’s response – and how you can help – see jewishnews.co.uk