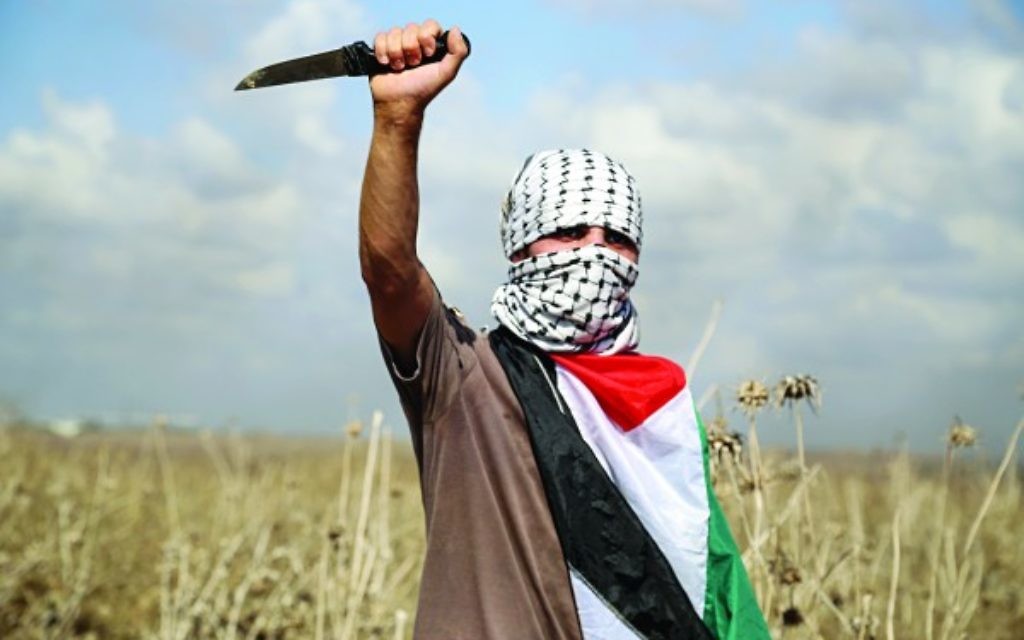 A Palestinian protester, holding a knife, looks on during clashes with Israeli security forces near the border fence between Israel and the Gaza Strip

As psychopathic Palestinians randomly butcher Israelis with meat cleavers and kitchen knives – in scenes reminiscent of the murder of Lee Rigby – Jewish News today accuses the British media of unforgivably blurring the line between innocent victims and evil killers.

As Jews are targeted for slaughter – incited by Palestinian leaders – we condemn our national media for betraying the British public and ignoring cold hard facts.

Complaints the British media’s reporting on Israel are, of course, nothing new.

But this week, as we witness Jews being randomly slaughtered in the street by crazed Palestinians armed with kitchen knives, screwdrivers and vegetable peelers, the coverage has never seemed quite so chilling, so ignorant, so utterly, wilfully wrongheaded.

To the casual reader or viewer, it appears the Jewish state is the cause rather than the casualty of this crisis. The victim cast as villain.

The chronology of one particularly shameful headline on the BBC website, changed no less than four times in a matter of hours, illustrates the point:

We got there in the end. Whether this is the result of laziness, ignorance, pressures of the daily news cycle or, as many suspect, something far more sinister, the version of events reflected in our national media represents the sort of wholly false coverage you’d expect from Iranian-funded Press TV – not the supposedly reputable mainstream British media.

At ominous times like this, with Israelis forced to use anything from umbrellas to selfie sticks to defend themselves from savages, and incidents of anti-Semitism at record levels, dishonest coverage of Israel’s plight does more than anything else to fan the flames of ignorance and intolerance.

There have been more than than 25 stabbings in Israel and the Palestinian territories in October. These include:

• 12/10 – Three attacks in Jerusalem, with two Israeli Jewish teenagers critically injured in Pisgat Ze’ev, a settlement. One was riding a bike.

• 3/10 – Palestinian man stabs a family of Jewish settlers in the Old City, killing two men and seriously injuring a woman and child.

• 1/10 – A car of Jewish settlers targeted in a shooting attack in the West Bank, two parents gunned down in front of their four children.